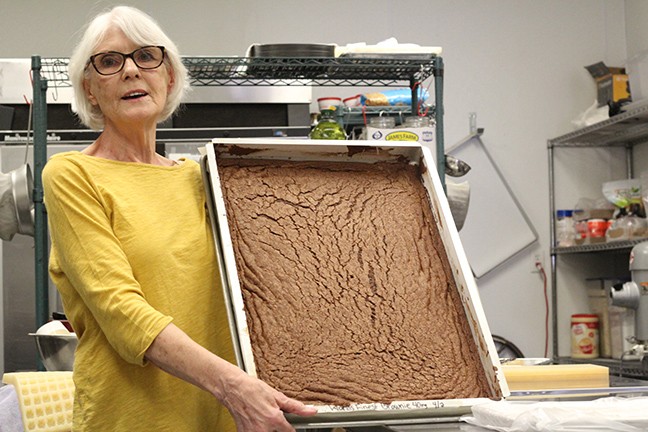 The kitchen where Jane Monday, a 70-year-old baker known to many of her friends and coworkers as "grandma," does her work looks like any other industrial kitchen. A piece of paper attached to a stainless steel refrigerators details a list of products like "World's Finest Brownie," "Snickerdoodle" and "Krispie Treats." The Backstreet Boys are singing about the age-old desire to turn back time on the radio. Hairnetted employees are carefully pouring melted truffle chocolate into molds.

Then Monday will say something like, "I really like hash. I'm old school," and you'll remember where you really are: at Cornucopia Health & Wellness, one of the first edible companies in Arizona.

Monday started the kitchen back in 2012, though she's been baking pastries professionally for 15 years and cooking for about 50. Years and years ago, she and her friends would combine cannabis with butter and make themselves brownies, an amateur foreshadowing of Cornucopia.

Of course, times were different then—she and her friends never knew how strong the brownies would be. Now, with the legalization of the medical use of cannabis in Arizona in 2010, the affair is much more structured. Monday says she likes to keep three things in mind for Cornucopia's products: They want to make items that taste good, are dosed evenly, and that are familiar to people. All of their products, including vegan, gluten-free and sugar-free options, are made from scratch and use only whole-plant extractions.

"We want our stuff to be good, not just get you stoned," she says simply.

Each batch of goods at Cornucopia gets its own number, with details about the plant and extraction it contains. Customers can call to ask about any product they've bought, and Monday can tell them the day it was made, and even who made it.

She knows a lot about the supply chain of the product, considering the chain is located almost entirely onsite. Purple doors in a hallway off the kitchen hide temperature- and humidity-controlled grow rooms with different strains of cannabis plants. A bit further down the hall are several labs where scientists extract the plants' THC for use in baking as well as concentrates for products that are smoked or vaped.

Christian Hernandez is a lab manager who talks about supercritical states, terpenes and decarboxylation with dizzying proficiency. His eyes light up when you ask him a question about the process of extracting different kinds of CBD oils from cannabis. His eyes light up even if you don't ask. Monday likes to say the University of Arizona biochemistry grad "thinks in molecules." She also says his dedication has ensured their products are more consistent than ever.

Work by Hernandez and the other lab managers produces the tar-like THC extract that's mixed with oils that are baked into cookies and brownies. There are no preservatives in anything, except for the gummies. They sell products with doses of THC ranging from 5 mg to 120 mg.

"We sell a lot of those," Monday says of the 120 mg truffles. "I couldn't imagine eating one."

Monday uses only small amounts of medicinal cannabis, but is a big supporter of its benefits. In many ways, Cornucopia is a family affair. She makes her German chocolate brownies with her grandmother's German frosting. Her sister, one of the original members of the kitchen crew, lived for six years after being diagnosed with terminal lung cancer, and believed cannabis improved both her longevity and quality of life. The 5 mg "Judy Bears" Cornucopia sells now are in honor of her memory.

"I truly believe that since hemp has been taken out of the food chain, cancers and other maladies have exploded," Monday says. "I think we're lacking that nutrient in our system. I think recreational is fine—I'd rather see people do that than drink. But the medicinal properties are just unparalleled."

Jean-Paul Genet, a co-owner of the Purple Med/Green Med dispensaries that make Cornucopia products, says he got into the business because he's a cancer survivor himself. He says he was diagnosed with leukemia in 1977, and doctors told him he had three or four months to live. He headed to a clinic for no-hopes run by a friend of a friend in Mexico.

"Part of what you learned was how to cultivate herbs and make tinctures and extracts, including cannabis," he said. "I'm 69 now. I was 27 when that happened, and I've never been on a prescription pill since."

With Cornucopia, Jane and her team aim to provide the medical benefits of cannabis to Southern Arizonans, one handmade chocolate chip cookie at a time.