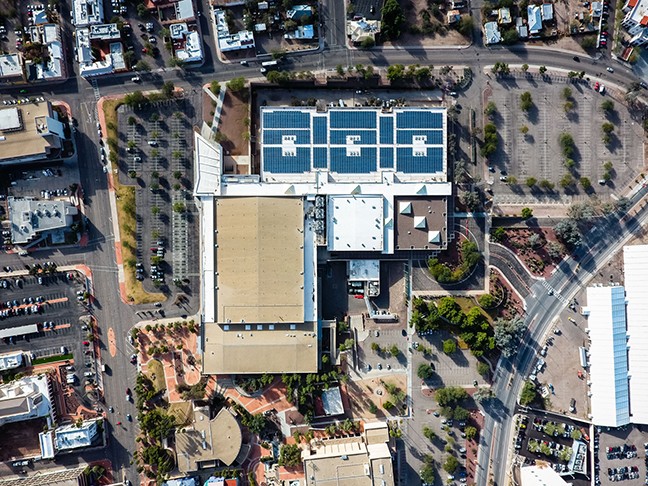 Courtesy
If the Rio Nuevo board has its way, plenty of changes will soon come to the Tucson Convention Center.

Downtown's venerable Tucson Convention Center could be in for a $50 million renovation in the future, at least if Rio Nuevo has its way.

The downtown facilities district, which oversees the operation of the convention center, its arena, its music hall and theatre, is proposing the renovations in order to keep the facility at-pace with its peers, according to District Chair Fletcher McCusker.

"Rio Nuevo considers the TCC our number one priority," McCusker said via email. "We couldn't have considered this without the ten-year extension just granted by the legislature.  The Music Hall is seriously out of date, the plaza and fountains, frankly, are a disgrace.  This could be Tucson's Lincoln Center and we feel obligated to make it a venue we can be proud of."

The proposed renovation, which was unanimously approved by Rio Nuevo's board, has a current price tag of $42.5 million, with an additional $7.5 million in funding should construction costs climb.

The renovations include a $7.6 million set of improvements to the actual convention center, its exhibit halls and ballrooms.

That sum would include remodeling the center's facilities, while also refurbishing its restrooms, lighting, sound and data systems, according to a district release.

TCC's music hall is set to receive a $7.6 million renovation of its own, which would include remodeling the hall's lobby and restrooms, while renovating its green room, patio and dressing rooms.

The final task for the hall would be a complete replacement of the 47-year-old complex's roof, which would be included in the price tag.

A center point of the TCC is the $11 million upgrade of the historic Garrett Eckbo-designed fountain and its surrounding garden outside the facility, which will be overseen by longtime Tucson architect Helen Erickson.

The arena attached to the TCC would receive a $4.8 million improvement that includes replacing the center's ice plant and floor, while repairing the roof and lighting.

The latter improvement is welcome news for the Tucson Roadrunners President Bob Hoffman, whose team is thrilled with the proposal.

"We are very excited to see the continued growth and development of our home," he said. "The Tucson Arena has been a terrific venue for the Roadrunners and we have great fans that make this one of the best atmospheres in the American Hockey League. Seeing the commitment to further improve and develop the facility is a credit to the support the team has received from the community and a credit to the vision of Rio Nuevo to continue this downtown reformation.  We are thrilled to be a part of it."

Erickson believes the renovation and re-imagining of Eckbo's iconic fountain, which will include native plant life, can serve as a point of pride for Tucsonans in the years to come.

"We're essentially reclaiming another downtown park for Tucson," Erickson said. "There are people that come from all over the world to see this place, so it's another way to put Tucson on the map in a very positive way. So, it benefits the immediate community, and the world at-large by maintaining this very important public design."

The proposed renovation would take place between June 24 and Oct. 1, 2019, which would not overlap with the Roadrunners schedule.

It could be a conflict for the new coming Tucson Sugar Skulls indoor football team, as the Indoor Football League's playoffs begin in mid-June.

Erickson believes the renovations, which have gone out to construction companies for bidding, according to the district's release on Friday, Nov. 9, will help the facility keep up with its peers.

"As Fletcher keeps saying, this is our Lincoln Center," Erickson said. "We need to make sure that we are present front and forward on that."