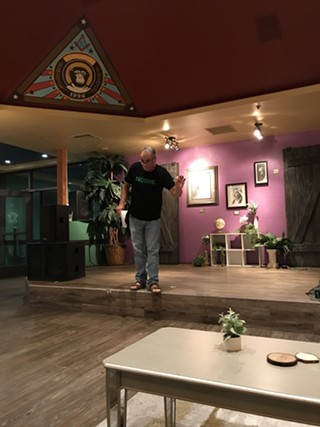 A space named after a famous gorilla, with a monkey-themed décor left over from a previous incarnation, is looking to become a local Mecca for cannabis users seeking a place to gather.

The Harambe Café & Social Club on Tucson's east side is gearing up for a post-COVID run as a pot social spot.

Owner and manager Adriana Kittrell, whose family owns both PurpleMed to the west and GreenMed to the east, sees it as her mission in life to create a safe space for users of legal pot.

When her family opened GreenMed on the site of the former Nimbus Brewery & Restaurant at 6464 E. Tanque Verde Road in 2018, Kittrell had been working as a bartender at a local restaurant.

Other family members were already involved in the business that began as PurpleMed in 2012, including her brother, who is head grower for the dispensaries.

"I didn't know what I wanted to do, and then my dad was telling me about a few of the events they had and it was so cool," she said. "Snoop Dogg came to visit PurpleMed and he did a meet and greet and said hi to everybody. After that, I was like, 'I'm interested.' I've always been someone who wants to help people but I didn't know how."

It did not come easily for her though, as her parents made her work her way up through the business. Kittrell started out cleaning and eventually worked into the dispensary side, where she learned the nuts and bolts of the business, as well as studying up on the plant that has become medicine for so many people.

"I actually started out just cleaning the warehouse and cleaning the bathrooms," she said. "I was so angry about it, but I had to start somewhere. They weren't just gonna hand it to me. It was an important education, because you have to know where people are coming from."

Harambe opened in 2019, several months before COVID shutdowns roared through the hospitality industry and put a pause on many burgeoning businesses. The interior features a small stage surrounded by sofas, a bar with vacant beer taps, a room dedicated to those who want to smoke indoors and plenty of monkey imagery left over from its previous incarnation as a local watering hole.

While Harambe shares a building with GreenMed, it is an entity in and of itself separate from the dispensary.

The space is named after Harambe, the famous gorilla who was shot in May 2016 after a 3-year-old child fell into his enclosure at the Cincinnati Zoo. Zoo officials killed the 17-year-old animal in order to save the child, but the nationwide backlash heavily supported the rights of the deceased, 400-pound ape.

"My dad's businesses have always been called 'purple monkey something,'" Kittrell said. "He considers himself a silverback gorilla, so this was meant to be here."

She did not know it at the time, but recently Kittrell looked up the meaning of Harambe in Swahili, Kenya's national language, and found it means, "all pull together."

"I was like, wow, are you kidding me? That is exactly what we're trying to do," she said. "That is a very beautiful and cool thing."

Kittrell was fully on board with the concept of cannabis as medicine and Harambe played host to vendor fairs, tasting events, parties and various meetings. There was even pot-infused yoga.

According to cannabis attorney Tom Dean, it is illegal to smoke indoors, but vaping and edibles are permissible

"Smoking can be permissible on an outdoor patio as long as no smoke gets inside through doors, windows or ventilation," Dean said. "The same rules that apply to tobacco also apply to cannabis in a business like a restaurant or coffee shop."

To accommodate the rules, Harambe has a special room where people can light up and Kittrell hopes to turn a large patio into a safe smoking space once it is screened in.

Coming Back After COVID

Like many other businesses, everything came grinding to a halt over national health concerns and it was not until recently that the doors of Harambe reopened.

Kittrell's dream remains to create a safe space for people of all stripes, where they can attend classes, find a quiet space to work, or gather for socializing in a non-alcohol setting.

"We really wanted to create a safe space for the cannabis community," Kittrell said. "So it's been really cool since we reopened."

In the weeks since reopening, Harambe has hosted a ladies night food truck rally, a "1933 Prohibition Party" and several tastings. Southern Arizona NORML has returned for its monthly meetings and hosted a series of expungement clinics to help people with low-level marijuana convictions.

As an affiliate of the only Black-owned dispensaries in the region, Harambe has dedicated itself to social justice, particularly when it comes to advocacy for underrepresented communities.

One of the big selling points for the passage of Prop 207 that legalized adult-use in Arizona was the possibility of the expungement of low-level pot offenses. Estimates are that there are somewhere in the neighborhood of 200,000 offenses eligible for expungement in the state. Communities of color have been disproportionately affected by the decades-long war on drugs. According to the American Civil Liberties Union, Black people are 3.64 times more likely than white people to be arrested for marijuana possession.

Early on in the process, local chapters of the National Organization for the Reform of Marijuana Laws began working throughout the state to help qualified individuals clear their records.

In the weeks leading up to the July 12 start of expungement, Southern Arizona NORML organized several self-help clinics. Hosting those events at Harambe was a natural thing, as the advocacy organization was already using the space for its monthly board meetings.

"We began our partnership with Adriana and the Harambe Café through tabling at events and hosting our monthly chapter meetings there," said Arizona NORML Director Mike Robinette. "We closely align in organizational values, particularly in our desire to give back to the community."

Southern Arizona NORML, which Robinette also leads, has settled in with a social gathering at the beginning of their meetings on the first Thursday of each month beginning at 5:30 p.m., with the meeting kicking off at 6:30 p.m.

There will be another free expungement clinic taking place on Saturday, Aug. 21, from 11 a.m. to 3 p.m.

"We remain incredibly grateful for all the support that Adriana has offered us and are excited to continue our collaboration with the Harambe Café," Robinette said.

Kittrell recently expanded her support of the cannabis community to military veterans and sees the space as a place where first responders can also find a welcoming atmosphere to unwind from the difficulties of their work.

"I think it's so important to introduce cannabis to first responders because I can't imagine what these people are going through," she said. "They're told they just have to be tough about it, right? They deserve to heal in a safe way."

Local veterans' advocates have been eyeing the space for social gatherings, as traditional venues such as Veterans of Foreign Wars posts usually serve alcohol and many old-school vets look down on their cannabis-using brothers and sisters.

Ricardo Pereyda, a veteran and longtime Tucson advocate for access through the Veterans Health Administration, has been in talks with Kittrell and plans to have veteran social gatherings at Harambe on the last Thursday of the month.

"We need a spot where veterans can meet up, congregate and feel normal, reduce stigma and get involved in the community," Pereyda said. "We're looking for it to be a touchstone to the community. We want to invite community organizations that are trying to reach out to veterans that aren't your usual or typical people that you're going to find in the VFW."

Pereyda is involved with a group that calls itself Veterans Action Council and is working to gain access to MMJ through the VA and to normalize pot use to treat health and mental issues that are driving veterans to addiction and suicide in unprecedented numbers.

The meetings will be both social and informative, as members of the VAC will talk about the latest goings on in cannabis regulation and ways veterans can get involved in advocating for their own interests.

"We wanted to find a place for veterans to get together where they're not stigmatized for their cannabis use and I appreciate that they're in a Tucson landmark," Pereyda said. "Veterans are a microcosm of the community: We're part of any demographic that you can point to, Black, Hispanic, straight, gay, lesbian, bi, trans, conservative, liberal, etc. We're citizens."

That is really what's at the heart of the Harambe experience though, according to Kittrell.

"We just wanted a safe space for people to gather and to build a community," she said. "We deal with a lot of people who have addiction issues and they want to be social, they still want to be around people. But the bar is not the best place for that, so we don't do any alcohol here. It's not something I'm looking to do, because at the end of the day, I want to be a wellness center and a peaceful place for everybody."

For a schedule of events taking place at Harambe, go to instagram.com/harambecafe.