A strange thing happens when John C. Reilly walks into Cedar Rapids: Nothing else onscreen is really worth paying attention to anymore.

Reilly, an Oscar nominee for Chicago and one of the most reliable character actors going since Boogie Nights, has been scoring in comedies since Talladega Nights, so it's no surprise that he's up to the challenge here. Unfortunately, because Reilly is such a bull, the china shop is left in ruins, in ways both positive and negative.

Cedar Rapids is supposed to be the travelogue of meek insurance agent Tim Lippe (Ed Helms), who heads to the big city for a conference. The "big city" is Iowa's second-largest metropolitan area, and the trip there includes Tim's first time on a plane, revealing just how eye-opening the boozy conference will be for him.

Reilly plays Dean Ziegler, the only influence in Cedar Rapids that Tim's boss (Stephen Root) warns him to avoid. It's easy to see why. Dean is a nonstop party, or at least a nonstop drinker, and Dean sees very little difference between those distinctions. While Tim is in Cedar Rapids to learn more about his industry and carry the torch for his firm—which has won the prestigious Two Diamonds award several years running—Dean is in town to get wasted and get laid.

Naturally, the two wind up sharing a cramped room in the overbooked hotel with Ronald Wilkes (Isiah Whitlock Jr.), a human incarnation of Family Guy's Cleveland Brown. Debauchery follows quickly, and Tim—who, not surprisingly, is a teetotaler—has trouble keeping up.

Cedar Rapids is caustically funny at times, which is mainly a testament to Reilly, though the more-low-key Helms has some very good moments as well. It's just that in combination with Reilly's scene-chewing, Helms is significantly overpowered. "Outmatched" is probably a degree or two too far; after all, the nature of the characters indicates that Tim is just going along for the ride.

Perhaps if the film's conclusion were a little tidier, the disparity wouldn't appear so great. After night No. 2 of insurance agents run amok—a festival of impropriety that includes hotel pool sex for Tim and conference eye candy Joan Ostrowski-Fox (Anne Heche)—it becomes increasingly difficult to up the ante in a believable way, and with a comedy of errors, there's no scaling back once you start. Are there laughs after the pool-sex incident? Yeah, but Cedar Rapids was on point for about an hourbefore losing focus, not overwhelmingly, but bad enough that it's noticeable.

An actor like Reilly is more than capable of walking away with any movie, and he does exactly that here. The character is so much larger than life that it's bound to be a fun gig. It clearly shows in Reilly's performance, but there's more to Dean Ziegler than just being loud. That is one of Reilly's strengths as an actor (forgiving, for the moment, his up-to-11 antics in Step Brothers). He can take a bombastic comedic role and find real truth about the character, which in turn makes the comedy that much stronger.

For Helms, this marks his first leading role since The Hangover, and there will be more leading roles for him, especially with that film's sequel due out this summer. Wisely, the veteran of The Daily Show and The Office has chosen a role that most audiences would have no trouble accepting. Helms serves as an executive producer of Cedar Rapids, so he is being careful and specific with his selections. As careful as Tim Lippe, maybe.

He does not disappoint, but it is strange to watch an able comedian so willingly put the spotlight on another performer when it's supposed to be on him instead.

Cedar Rapids is not showing in any theaters in the area. 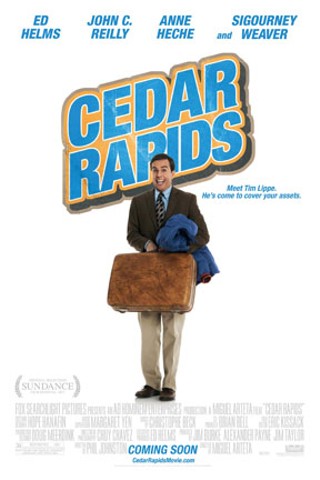