Know this going in: Dario Argento's Dracula 3D is a really bad movie. Really bad. Criminally inferior for someone who co-wrote Once Upon a Time in the West and made one of the high watermarks of bizarro horror, the legendary Suspiria.

This is a pure B-movie in every sense of the word, lacking any sense of style or even function, really. That is, if it wasn't done on purpose. But if it were, one imagines the seams might show a little bit or give a wink now and then, and this flick is blithely oblivious to its many shortcomings. And yet, it's hard not to find a soft spot for this piece of kitsch, a Halloween movie that offers no thrills or chills and is more interested in the breasts of actress Miriam Giovanelli than, say, set design or props (although you could gamely argue that Ms. Giovanelli's breasts are both).

Argento has had an uneven career for years. He peaked early, with Deep Red and Suspiria—which is wrongly overlooked this time of year in favor of a lot of repetitive American slasher flicks—but anything in the past 15 years or so is a real crapshoot. It's like eating turkey a couple of days after the expiration date: You might get lucky but chances are you'll regret it pretty quickly.

Having said that, Dracula might be his worst film or, more evidently, his laziest. It does not even rise to the level of sloppiness because it never takes an unexpected or difficult step; it's a film going through the motions directed in complete slow motion.

Argento diverges from what we know of the Dracula story within the details but we still get Van Helsing (Rutger Hauer) and a nattily attired bloodsucker (Thomas Kretschmann). But the film still creaks under the weight of the basics. When Jonathan Harker (Unax Ugalde) reads an ancient text about the history of vampires, he tells us that—shocker!—this man named Dracula feasts on human blood. Harker is attacked by Dracula a few minutes later, but not before the vampiric Tanja (Giovanelli) takes off her robe in his presence. And why not? It's 3-D, after all.

Soon enough, Van Helsing is on the case, and there's almost some respectability courtesy of Rutger Hauer. But Hauer is as disenchanted as the rest of the production so his performance isn't even weird or anything. What a spoiled opportunity for a showy role.

Or then again, maybe not. Dracula 3D is strange in its own way, a low-budget work from a precise director masquerading as camp or camp that just isn't smart enough to realize it—and that's the impression you get with every scene. Are we supposed to notice the cheap interiors built on some Italian soundstage? And what's with the 1970s candy-apple-red movie blood? Maybe if Hauer took his performance to a loopy extreme, it would throw off this delicate what-the-holy-hell-am-I-watching vibe.

The pièce de résistance is the overdubbed dialogue. Argento is primarily working with German and Italian actors, but the film is in English. That does not mean, however, that all the performances are. Hauer and Kretschmann appear to be recorded on set in English, but almost every other actor has dialogue dubbed after the fact. So what you get is not a dubbed scene but a dubbed actor or actors in a scene that is otherwise perfectly fine. It's impossible not to look at their mouths to see who's guilty. Capping it off, of course, is the physiological certainty that any overdubbed dialogue won't truly match the way the line was spoken the first time, so it's even more disorienting and dispassionate than it would have been originally, even out of the mouths of very bad actors. It's a great drinking game waiting to be born.

And we haven't even talked about the preying mantis. That's for you to discover on your own.

Jokes and rubbernecking aside, it's sad that Dario Argento is a director who should have made some twisted 3-D in the past and whose first 3-D outing comes at such a great professional cost. Many directors have somehow found a second wind in their 70s and beyond, from Woody Allen to Clint Eastwood to Sidney Lumet. But Argento has been disappointing for a while and this film makes so many rookie mistakes and seems so poorly thought-out from beginning to end that you have to wonder if his greatness is all dried up.

It's hard to recommend Dracula 3D unless you just want to laugh—at it and not with it—because that's really all you can do.

Argento's Dracula 3D is not showing in any theaters in the area. 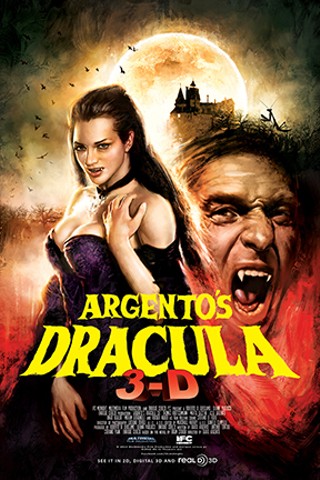