Democrat Ann Kirkpatrick talks about immigration, gun violence and other issues as she seeks a congressional seat in Southern Arizona 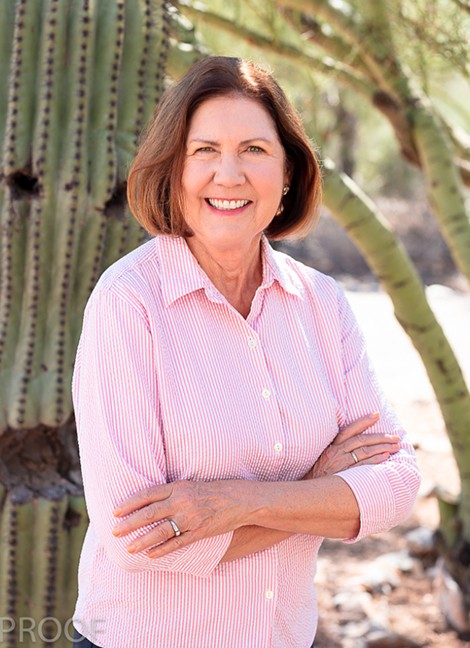 Do you see this election as a referendum on the Trump Administration?

I don't. I have a little bit different perspective on the Trump voter. I know them. I went to high school with them in rural Arizona. They are good people. They were going to work in the local sawmill, which is what their dads and their grandads did. And the mill closed down, and they had to patchwork part-time jobs together to feed their family and raise their family. And they were expecting a good life, and it hasn't been that good. So I get that, and I really think that what I and Democrats need to do is have a plan for them and visit with them and listen to them and show leadership.

Would you have voted for the tax package that President Trump signed into law?

I would not have. No. Too expensive and there's no (plan to) pay for (it). I really am concerned about the deficit, and I think it was a very reckless thing to do. After House Speaker Paul Ryan said, "We now need to look at Medicare and Social Security as a way to pay for this," seniors are approaching me, really worried they're gonna lose their earned benefits of Social Security and Medicare.

Talk about Social Security. What do you see as a strategy to shore up the program?

When I was elected in 2008, (former U.S. Rep.) Jim Kolbe approached me about being on a bipartisan committee of current and former members of Congress to address the budget, and we were gonna tackle three issue areas: Social Security, Medicare and the defense budget. So we started with social security, and there are a couple other things we can do right away that puts it on a sustainable path. One, is to not index it on the CPI but have a different index, not the chain index but a different index, that addresses how seniors spend their money. They spend it differently than middle-age families or young families. And then the second thing is to at least increase the cap on how much income is subject to Social Security taxes. Those two things would put it on a sustainable path. And we were making good progress and then 2010 came and all the members on that committee lost their elections. And to my knowledge, it hasn't been revived. I'd love to do it. It was great work. I think Jim Kolbe is just a wonderful person.

Would you support a voucher system for Medicare?

You voted in favor of the Affordable Care Act. You continue to support it, but what do you think the successes of the law has been and what needs to change to improve it?

I did vote for it and called it my proudest vote. I voted for it in spite of being told that if I did, I would lose my next election, which I did, but it was still the right thing to do, and I hear from people every week who tell me, "Please don't get rid of it." In terms of improving it, we need to require Medicare to negotiate and insurance companies to negotiate prescription drug costs.

What about Medicare for All?

I support allowing people to buy into Medicare at any age as Medicare for All. It would solve some of the problems we have in Arizona in the counties where we only have one insurance carrier, and this will be a pretty easy way to give them another affordable choice.

On immigration, you have supported a path to citizenship for undocumented immigrants who are now in the United States, you still do?

I do. They are good people. I really got to know a lot of DACA recipients and Dreamers through my immigration working groups. We always started those meetings with testimonials from the Dreamers, DACA recipients, and they're so emotional. And they just make you cry, and it shouldn't be that way. I was so convinced that they could persuade members of Congress if members of Congress had heard their stories. So, I introduced legislation to allow them to work on Capitol Hill. It didn't go anywhere, but I'll introduce that legislation again.

What are your thoughts on the conversations about a border wall?

What do you make of the president's push to reform NAFTA?

I think it really should be done by Congress, and it needs to be an open transparent process. One of the problems I have with this administration is they're not transparent. But I was pushing for an effort in Congress to look at a way to reform it that's open and has participation from the American people. In Arizona, we really suffered from NAFTA and a lot of trade went to Mexico, from Arizona to Mexico. I think we've recovered somewhat, but I'm very leery on anything that comes from any administration.

You also do not support the Trump Administration's zero tolerance approach to border enforcement. Why not?

First of all, the issue of the Dreamers and DACA recipients being deported and separating children from their parents at the border—that's a black eye on our country that we will have to live with for the rest of our country's existence, and it's absolutely wrong and inhumane. However, I don't support abolishing ICE. I think we need to investigate ICE and reform it. And I'd liken it to: You might have a corrupt police department. You don't get rid of the police department, you go in and you investigate and reform.

What are your thoughts on the proposed Rosemont Mine?

I'm opposed to Rosemont. I'm not opposed to mining in general. I supported Resolution Copper because that's in the copper corridor where they've always been mining. I'm opposed to Rosemont, because it's in an urban setting, and I'm really concerned about what it does to the water. But, very disappointed that the forces are moving along with the permitting.

You said your views on gun regulations and the NRA have changed in the wake of the 2011 Tucson shooting as well as the Sandy Hook shooting. What changes in federal law, do you believe, would help reduce gun violence?

I was a co-sponsor on Gabby Giffords' legislation, which strengthens and expands background checks. I voted against and fought against dangerous people having guns, like people in the no-fly watch list, stalkers and domestic abusers. I think that's not a partisan issue. I think we can agree to get those things done.

Your opponent says you can't understand Southern Arizona issues because you're from Flagstaff. Talk about why you decided to come to Tucson and seek the congressional seat here.

Well, right out of high school, I came here on scholarship to the University of Arizona, got my undergrad degree. Then I taught school here for a couple of years, then went to law school here—was a clerk actually for Barbara Lawall, who's the county attorney now, and for John Roll, who was killed in that January shooting in 2011. And then after law school, I worked in the Pima County Attorney's Office. Got married here, had my first child at Tucson Medical Center. So when I first got into the race, I was taking on Martha McSally, and I had actually lived in Tucson longer than she had.