Come Back and Play

After a remodel and menu redesign, The Playground is open and is prepared for much frolicking 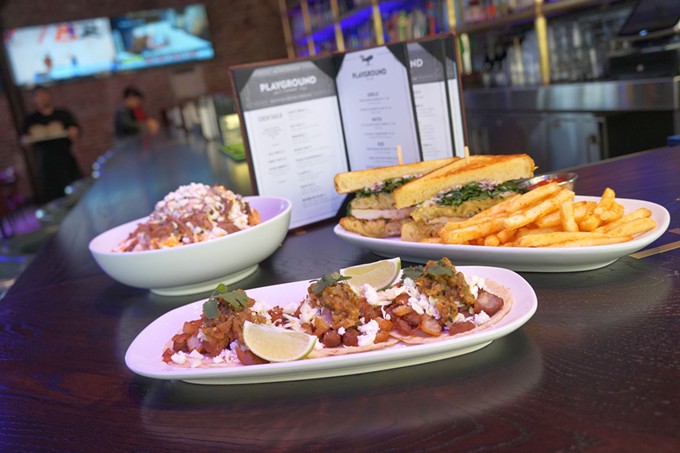 Mark Whittaker
Recess is over: the Playground gang is back to work.

When I first stepped in The Playground a few years ago, to be honest with you, I didn't like it. This was at a stage of the downtown revival when the privileged and hip pretty much owned the streets and tables before balefully agreeing to let some of us less boojie have a crack at scraps of the fun they were having.

The place was loud, like uncomfortably so, bass-heavy rhythms shaking afternoon glasses and flatware. Not to mention, at the time, the whole back wall was one huge plasma screen, usually showcasing soccer or the latest UA triumph/defeat, so times got rowdy. It just wasn't my scene. Too much was going on and in a very bombast manner. So, when it shut down, I kind of shrugged and went "Oh well."

Then, after 18 months of silence, The Playground reopened. Passing by it gave an aura of subdued quirk, mild use of televised regality and, thankfully, a lower volume during the a.m. repast. At night though, when DJs move in to get people moving, you better believe the place is an aural juggernaut—as it should be. But during the day, over a nice plate and chilled glass, it is a welcome advice to be more inviting to those not ready to twerk into the wee hours.

And owners Rudy Dabdoub, Christina Rosete and Scott Stiteler knew this. The flash and wow of the initial concept seemed to quickly wear thin so after traveling across the United States and getting ideas from cool hotspots in San Francisco, Nashville and Brooklyn, they observed what worked about all of them and returned with a vision to make The Playground fun again.

First, and most importantly, the bar area is a space where I can totally see myself becoming a regular. The pleasant bar harkens back to open saloons done up in leather, wood and brass. Gone is that retina-diffusing, '80s-sci-fi multi-screen and in its stead, are a few tastefully mounted TVs dotted about. The upstairs patio is cordial, with one of the best views of downtown anywhere. But when I was invited to try out some of the new menu items, I knew The Playground is about to become everybody's after-school hangout.

Chef Ben Caballero, who oversees the kitchen at The HUB, which is under same ownership, hired longtime friend and chef Sergio Enriquez to handle the updated flavors and new kitchen of The Playground. Enriquez and Caballero both hail from the south side and the menu reflects that, along with years of hard work and finesse. When you step inside and are greeted with low-hued lights, attentive staff and an ambience of metropolitan ravish, it'll be Enriquez's food where you will find childlike amenity and, yes, playfulness.

Mercifully, there are a plethora of tacos to choose from. A standout for me was the Korean Beef, which had a deep Asian touch to the flavor and was extremely juicy. On a handmade tortilla, it comes paired with carrots, cabbage, onions, local chiles and Ponzu sauce. That and the Chicharron; a bit decadent, totally vibrant, yet not too heavy at the same time.

By trying to be more accommodating and follow through with a sincere Tucson pub approach, Enriquez also includes a smattering of finger foods and snacks. The wings with the strawberry barbecue sauce were outstanding, as was the slightly intimidating Tostitos Locos, a veritable mound of slow marinated beef or chicken, house ranchero beans, avocado crema, chipotle mayo and a sprinkling of locally grown cilantro and onions on house-made chips. For some reason it reminded me of a grown-up version of a certain fast food taco chain's "nachos," only done properly and by the hands of a seasoned chef. This will just add to the big kids' reminiscence paired with an adult beverage making getting a bit older a bit easier. As will the carne asada fries, which are like a southside poutine, yet bigger, bolder and definitely one for la raza.

There are a few varieties of burgers, all done with fresh, locally sourced beef, that are beautiful, but their chicken mac sandwich, equipped with perfectly grilled chicken topped with arugula and a homemade chile verde mac and cheese on Texas toast, almost made me weep from a strange nostalgia. This was a sandwich I dreamed about as a kid but have now eaten as a middle-aged man. Gracias, chef Enriquez. Gracias!

Welcome back, Playground. The only thing missing are some tetherball courts and a surly field monitor, because with the addition of tater tots, this is a downtown happy place we can all agree on. ■