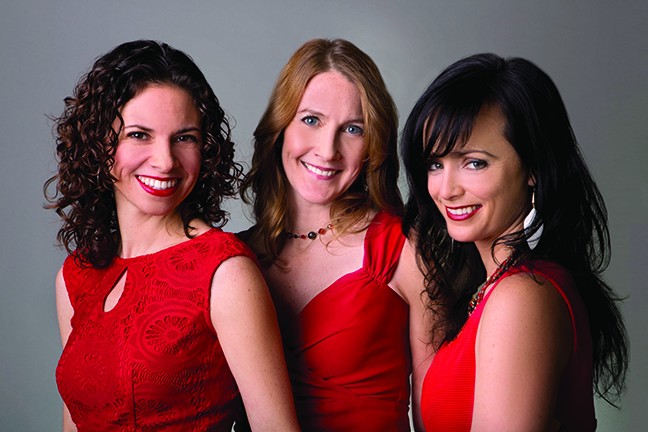 Courtesy photo
The women of Red Molly are coming to Tucson.

The Tucson Folk Festival takes place during the first weekend in April, and it's a wonderful event for a number of reasons. First of all, it's free. So the price is right. But also, the organizers of the two-day fest do their best to ensure that as many of the various genres and styles that fall under the "folk" umbrella as possible are covered.

Hosted by a number of venues in Downtown Tucson, the bill has been known to feature bluegrass, blues, Celtic, jazz, zydeco, country, and Latin and Mexican music. On the Saturday this year, performing at Jácome Plaza in front of the main library, is headliner Red Molly. Fittingly enough, the band formed in 2004 at a folk festival.

"It was in upstate New York, the Falcon Ridge Folk Festival," says guitarist and co-vocalist Molly Venter. "Usually those festivals are about individual singer/songwriters playing their songs separately. Abbie Gardner [dobro], Laurie MacAllister [bass] and a third member Carolann Solebello [former guitarist/bassist] got around a campfire for the first time, and Laurie and Carolann started singing harmony. They knew one song, started rehearsing and formed a band."

That was in 2004, and Venter joined in 2011. The fact that her name is Molly is purely coincidental—the band is named after the Richard Thompson song "1952 Vincent Black Lightning," with the lyric, "Says Red Molly to James, 'Well that's a fine motorbike, a girl could feel special on any such like.'"

"Abbie grew up going to bluegrass festivals with her family, and there she heard a Del McCoury version of that song," Venter says. "So we do get asked a lot where the name comes from. Red Molly stuck and it's been like that ever since. I had also been a solo singer/songwriter, traveling around living in my Honda Element and based out of Austin, Texas. I opened a handful of shows for Red Molly. All three of us are singer/songwriters, all three of us have slightly different musical backgrounds but overlapping when it comes to really good songs with good melodies."

That's where the band excels, the use of melody to create music that is essentially Americana but that dips into the folk rock pot, Americana, bluegrass, country and blues. Their use of the dobro, and their female three-part harmonies, are what make the group stand out. The evolution can be heard on their six albums, 2014's The Red Album being the most recent, and last year's One For All & All For One EP.

"We did a fun thing because we took a hiatus," Venter says. "That was just to focus on solo work. I had a baby and we wanted to take a break. We were touring heavily before that. When we came back together, we funded each of our solo records through PledgeMusic I think, and we got all our fans to pledge for these three solo albums by promising some new Red Molly music too. When we did that, we hired these two guys to help us produce it and play, and we realized that we just wanted to tour with them from now on. We have a bigger sound and more of a variety musically on stage."

The addition of a full band, naturally, has beefed up a sound that has progressively gotten more produced. Initially, the three members would essentially record the albums live. So The Red Album is a little crunchier and more indie than the previous material.

"If anything, it's gotten a little more powerful," Venter says. "I think at the beginning it was really singing together, taking turns singing each other's songs, singing sweetly on the chorus together. Now there's more songs where we're singing three-part harmony throughout. We worked up this cover of 'The Chain' by Fleetwood Mac, and that's just full-throated singing the whole time by all of us. It just creates this cool wall of sound by women. An entire show of that would be boring, but it's got more of that punch where you want to move your head to the music and you can feel something in your chest. It's just getting bigger and more complex."

Venter says that inspiration for her songwriting can come from pretty much anywhere, but it usually involves her trying to figure something out.

"I sit down and try not to edit and let whatever wants to come out come out," she says. "Afterwards you realize, 'Oh, that's that article I read. Or a poem. This is coming out because of the movie I saw.' Nothing comes from nothing, but when I get really into writing a song, it's some topic that I'm very curious about and maybe even struggling with. Whether that's in our personal relationships, which is common for songwriters, or I'm thinking about what it is to have gone from a single person to becoming a mom, or what it's like when your relationship is not a honeymoon relationship anymore. I had a father pass away, so I thought a lot about death and what happens there. What's going in culture and what's going on in me, and how are they interconnected."

This will be Red Molly's first time at the Tucson Folk Festival, but they're no strangers to Arizona. They're all based in the Northeast, so the heat takes some getting used to. Regardless, Venter says that we can expect a fun set.

"We generally try to have as much fun as possible," she says. "With each other, and that means between songs we can get a little salty or sassy. Since it's a festival, we definitely play the upbeat songs but also the simple moments with the beautiful storytelling that are stripped down and clean. Se expect a lot of three-part harmony, dobro, and great songwriting."

After that, Red Molly will be heading back to the studio to work on their seventh full length album, and that will mark the first time that the three women and their drummer/musical director will have all written together. It's a whole new world for this band, and hopefully we'll get a taste at the festival next week.