“I truly believe and hope that we will begin this process in this era of Tucson becoming a beacon symbol of sustainable, regenerative, collaborative community work,” Baquet said.

The annual boutique festival, which took a hiatus in 2020 and 2021, is placing the climate crisis at the forefront. Festival coordinators, including Baquet, hope to foster conversations and connections between creative minds such as Mexican musician and environmental activist, Caloncho, James Beard award winner Don Guerra of Barrio Bread, keynote speaker and co-founder of the national soil health nonprofit Kiss the Ground, Finian Makepeace, and many other local and visiting researchers, permaculturists and farmers.

Established in 2005 by entertainment director David Slutes, the festival became “the only solar-powered festival in the West” in 2007, according to Baquet. Slutes, his mentor, asked him to take over operations in 2017.

“(Slutes) established a solid foundation for what HOCO has become,” Baquet said. “As (we’ve) rebranded, taking it to a more international scale, seeking people to come from outside of Tucson, he really laid a foundation for it to be a Tucson festival above all.”

Carbon offset is at the core of the festival.

This year, HOCO is offering an in-house waste-sorting program that will allow festival organizers to compost festival waste at the offsite location, Awareness Ranch, a local aquaponics and permaculture center. It’s thanks to a $25,000 grant from Cox Communications presented in April. The media company approved a proposal about waste sorting at civic events, providing funding for HOCO to beta test and implement a waste-sorting infrastructure at the Pueblos Del Maiz festival in May.

“Our ultimate goal is to find useful things we can do with Awareness Ranch like plastic bricks, Styrofoam insulation,” Baquet said. “They can build anything out of trash.”

A tree-planting campaign is also set to launch at HOCO Fest. A tree will be planted for every performer flying in, or for each out-of-city flight ticket purchased by the festival. Baquet said festival-goers can donate to plant a tree as well.

While this year’s festivities will tap into the hotel’s solar energy, Baquet is already looking ahead to next year, in hopes of obtaining a mobile solar trailer to power indoor and outdoor stages.

The summit will be held on Sept. 3, the third day of festivities at the StartUp Tucson space, the Arizona Forge at Roy Place. By attracting a diverse group of speakers and festival attendees, Baquet hopes to establish solidarity with the shared desert biome.

“It’s important for me living in this area to continue doing things to defy those border walls and barriers and encourage connectivity within our two communities,” Baquet said. 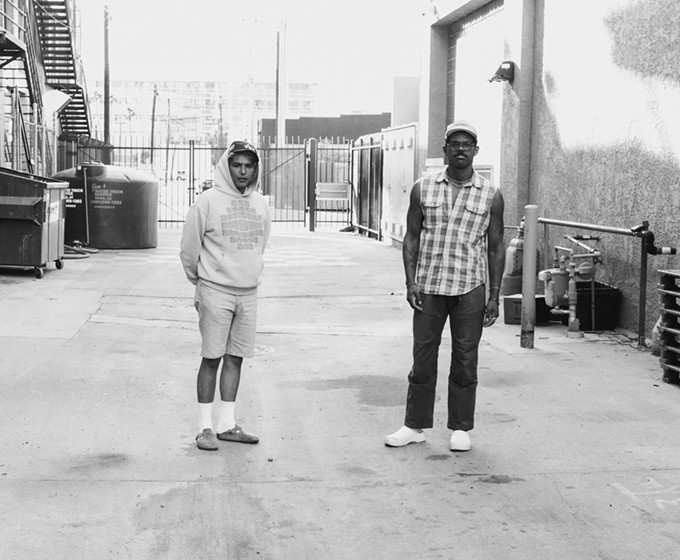 This year, HOCO Fest is implementing a trade.

Tucson native group, Los Ésplifs, one of the festival’s performers, connected Baquet with the independent music festival NRML, which is based in Mexico City. Originally from Monterey, NRML creates family-friendly music experiences that merge the arts, design and gastronomy. Baquet’s friend, Saul Millan made the connection to NRML’s director, Mónica Saldaña.

“We had a couple of calls and shared our visions of our festivals and I think we already admired each other’s curation and direction,” Baquet said.

NRML festival curator Saldaña who helped HOCO Fest secure Caloncho for the sustainability summit will join him to speak about “Regenerative Entertainment and Mindful Organizing.”

“He’s been doing some great work cleaning up the waters and turning the attention to a more conscious protocol in the entertainment industry,” Baquet said.

The international collaboration successfully booked about 10 artists from mostly the borderland regions, on both sides.

“We worked together to go after Los Dug Dugs and Los Apson, which are legendary acts for both of our communities,” Baquet said. “I thought it was a cool crossover.”

From Tijuana to San Diego, Mexicali to Hermosillo and beyond, Baquet said he is excited to showcase a scene that is taking off in a big way. The collaborative efforts hope to send a couple of co-curated artists to a NRML festival next spring. In hopes of nurturing the relationship between the two communities, Baquet hinted at the possibility for a joint event in Mexico later next year. “A small event, in a tropical place.”

Not so much following the “Coachella model” of festivals, Baquet’s collaborative vision is in search of something bigger, more so along the lines of a shared experience of transborder synergy.

“The borderland region is a priority for us to highlight and showcase, not only because that’s where Tucson lies but because I believe this area is so rich with art, culture, inspiration and beauty,” Baquet said. “It has always blown my mind how overlooked we are on a national, international scale.

“It’s exciting for me to use HOCO Fest to showcase Tucson and Tucson talent.”

An iconic landmark located in a desert oasis, the centenarian that is Hotel Congress is the “cornerstone of downtown” that has been through the good and bad. The venue which has hosted the annual festival serves as an international hub of sorts, seeing an increasingly diverse guestlist.

While HOCO Fest can be described as a magnetized and “amplified everyday Congress activity,” the gathering will tout ongoing shows every day for four days with a ramped-up food and beverage program.

“I think it creates a really beautiful energy, when you have multiple walks of life, enjoying different experiences and types of art,” Baquet said. “I think that’s what this fest is about.”

Calling himself a “Son of Tucson,” Baquet started working at the Hotel Congress in 2013, as a club manager and in-house talent buyer before moving to Los Angeles in 2016. From that point forward he worked as a DJ and contractor for the venue, frequently returning home before moving to New York, when he was visiting “a little less.” A man of many hats, he also independently operates the media company, Ranch House Media and is a partner with the booking company, Best Life Presents.

“Everyone in Congress, we all are so deep in the music that usually we welcome in a lot of other voices to our curating,” Baquet said. His experience in the music industry and deep roots in Tucson has influenced a thoughtful curation of the region’s soundscape. “We’re telling a story.”

The delicate cultivation that is Tucson, is made up of diverse geographical and sociopolitical components which together create a “regenerative network.” The sustainability summit being a “peak dream manifesting in real time,” for Baquet, is also a bit of a “teaser” for something bigger at the TenWest Festival this upcoming November.

“Through Agave Fest, Pueblos Del Maiz, HOCO Fest, TenWest, I feel like we can be the megaphone.”

A self-described dreamer and visionary, Baquet and his fellow festival collaborators are spearheading a “holistic” approach to the “new” Sonoran Desert, one festival at a time.

COST: Tickets start at $39.14 for performances