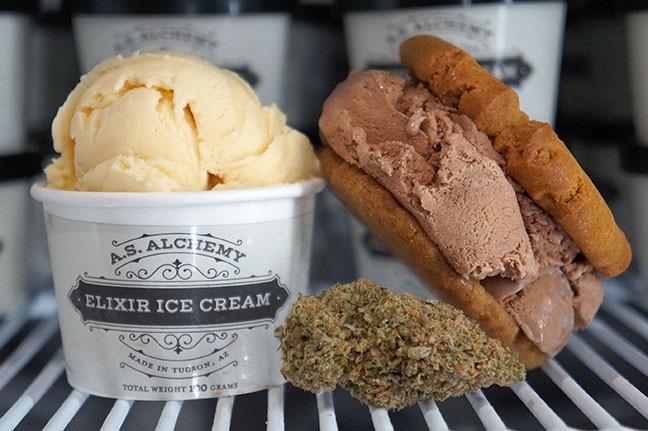 Entering the dispensary through the back means walking through a long-deserted brewery and taproom. The bar and floor are smooth wood and it looks as if the tap handles have been recently polished, though they've been unused and forgotten for nearly a year.

This will, once the law and permits allow, become a vape area where patients can legally use their marijuana medication, says KJ, a pseudonym of the owner and creator of A.S. Alchemy.

KJ already had a craft ice-cream biz with a headquarters miles away from this dispensary, but she mixes Elixer products here because Green Med has a license to create edibles. She says the idea of developing medicated ice cream was inspired by the notion that people who use marijuana tend to get the munchies and seek out sweet treats.

"There was just this one moment where my business partner and I were talking about how we used to eat weed brownies, which would make us hungry, so we would eat more," KJ recalls. "On and on. Since we already had an established ice cream business, we looked into the possibility of starting a legally medicated line of ice cream."

Getting to the stage where Elixir is with their product took a lot of time, experimentation and research. Working with a certified THC chemist, KJ finally got a recipe correct with the use of a high butterfat content in the base. That way, the cannabis can easily mix with the ice cream and create a curative effect. Not being much of a partaker these days, KJ uses suggestions and feedback from budtenders and patients looking to enjoy a sumptuous edible product, as the effects of edible cannabis tend to last longer than smoking bud.

"Of course, as chef, I have to taste everything," KJ says. "Which I do, but I do not actually eat it. Even at the lowest dosage, Elixir products are designed for regular and long-time patients."

Each scoop is served in a 4-ounce cup and has doses ranging from 10mg, 40mg or 70mg of either sativa or indica medication. Sativa resonates a lighter effect, usually suited for those dealing with anxiety or depression, while indica has a deeper response needed by patients dealing with chronic physical pain.

I don't have a medical marijuana card, so I had to ask a few friends that do how the flavor stacks up compared to locally produced, unmedicated ice cream. The consensus was fairly unanimous and extremely positive. One patient pal said it best: "Just imagine the best ice cream you have ever eaten, then about an hour later, you feel as if you are the best ice cream ever." For now, I'm just going to have to take their word for it. That is until the time comes when regular folk, like me, can walk in off the street and purchase such an incredible product. Because the ice cream looks, and smells, absolutely divine.

Due to the high demand and high praise of their ice cream, KJ and Elixir are now creating a line of ice cream cookie sandwiches (where the gluten free cookies are at the 10mg level), along with fruity sorbets (paired with fruity flavored cannabis) and an upcoming line of medicated chocolate bites and bars. KJ has recently developed "potcicles" (yes, weedy ice cream popcicles) and is hard at work on dosed coffee creamers which they plan to sell in individual flip-top packets you might find in your local café. If you're patient, and a patient, Christmas means you get to take home a heady cup of "Egg Nug" ice cream, which is sure to be hit at holiday parties.

You can find Elixir products at Purple Med Healing Center (1010 S. Freeway) and Green Med Wellness (6464 E. Tanque Verde), or you can have it dropped off at your front door by Hermes Delivery Service. Let's thank our voters for letting this happen and thank KJ for making it happen as Elixir paves a high road to a better—and tastier—legally medicated future.