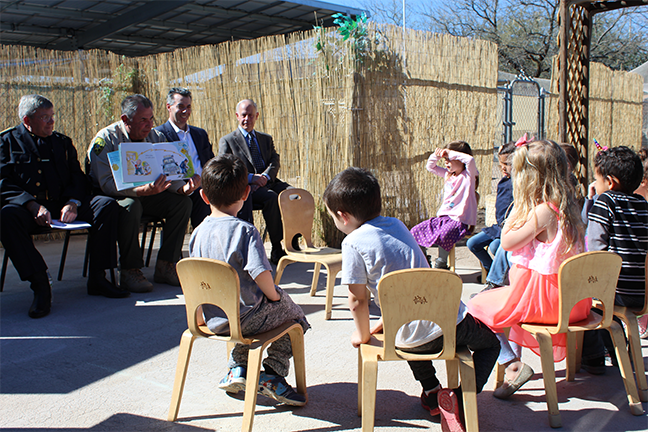 If it's predictable, it's preventable. That was the sentiment delivered by Oro Valley Police Chief Daniel Sharp and Pima County Sheriff Mark Napier while they urged legislators to make bigger investments in Arizona's early childhood education system.

They want to see the state's daycares and preschools improve in affordability, accessibility and quality because they argue it prevents criminal activity later on in life.

"Law enforcement officers around the country will tell you the first things we see among those who break the laws, school failure is a big part of that," Sharp said during a Feb. 28 press conference hosted at Outer Limits School. "In fact right now, about six in 10 of state prisoners don't have high school diplomas."

Napier said criminal diversion for youth is often presented with a focus on school-aged children from kindergarten through high school. But he believes the prime opportunity to make a difference in a child's outcome is even earlier than that.

"Psychologists would tell you that most of a child's personality and intellect is formed by age five," Napier said. "If we wait until they get regular school, and warehouse them in their regular school system, we've waited too long."

Outer Limits, located on East Fort Lowell Road near North Dodge Boulevard, is one of several high quality daycare centers in Tucson that accepts DES subsidies. The owner, Bill Berk, is a long-time early childhood education advocate. He is the vice president of the Arizona Early Childhood Education Association, the main entity representing the needs of private daycare and preschools providers in the state.

"What we know from people who do research on early childhood is that the work that our teachers do in the classrooms every day makes a huge impact today, tomorrow and for children as they move into kindergarten and throughout life," Berk said. "And what excites me about our event today is I can say that every single day and some people will listen, when [police officers] say that today lots of people listen."

The gathering was set up by Council for a Strong America, a national nonprofit that conducts research and advocacy work in partnership with local community leaders (such as Napier and Sharp) to promote evidence-based practices that set children up to be productive members of society later in life.

Michael Burke, a senior associate with the council's Fight Crime: Invest in Kids initiative, said advocating for better child care and preschool options is their bread and butter. The group recently published a report detailing how the economy and public safety suffers in the long-term when early childhood education is not a policy priority.

It found that 60 percent of all mothers in Arizona are the primary source of income or equal co-contributor in their households. This means they cannot stay home and care for their children (approximately 255,000 under the age of three living in the state) and need a reliable place for care and early learning experiences. So while a majority of parents are in the workforce and contribute to Arizona's economy, the child-care system is not advancing at the same pace to meet these families' needs.

The report found that half of all Arizona residents live in a child care "desert," which refers to a place with only enough licensed daycare slots to serve about one third of the children living in that area. There are 22,200 total children in the state who cannot enroll in a licensed center because there just isn't enough space.

The research indicated that the cost of child care in Arizona has grown 60 percent faster than the average cost of other essentials like food, housing and transportation. The accelerated rate has been attributed to the state government's low child care reimbursement rates, which have remained stagnant since 2000.

Without a realistic government subsidy, child-care providers can't offer affordable rates to parents. Low-income families who can't pay in full get locked out of the system, and children from wealthier families become the only ones receiving quality education during this crucial time of development.

Many parents in Arizona and across the country are paying $11,000 in child care expenses every year, which is close to a year of public college tuition, according to Burke. If you are a single parent or live in a single-earner household, that is nearly 41 percent of your annual income.

"Because child care here in Arizona can be so inaccessible and so unaffordable for so many people, a lot of kids are relegated to a patchwork system," Burke said. "They might stay with a parent one day, a relative another and be with a child care provider another. And although obviously this is parents doing the most that they can for these kids, it is often not great for stability and ultimately not great for social emotional development and cognitive development."

Sharp and Napier said that law enforcement's job is to enforce public safety in their communities, but a part of that includes prevention.

Napier said the intersection between early childhood education and the criminal justice system is "undeniable."

"We know very keenly that the majority of people that intersect the criminal justice system and engage in criminality later in adult life are undereducated, and education is a pathway toward prevention," he said. "So when you invest in early childhood education ... it is an investment in the criminal justice system because you're going to pay one place or the other. The penitentiary system and incarceration is a black hole of investment, there is no ROI on that at all."

Penelope Jacks, the Chair of Strong Start Tucson Committee which promote publicly supported child care models, points to the James Heckman equation. Heckman, a Nobel Prize-winning economist estimated that the return on investment for early childhood education is between three and 16 times each dollar spent.

Jacks said the return is so high because research shows that children who experience high quality early childhood education don't require remedial education in public schools, they are more likely to be employed which reduces dependency on welfare, their immunization rates are higher and they are less likely to engage in criminal activity as Napier and Sharp pointed out.

"I see my advocacy and Chief Sharp's advocacy here today as an investment in our community, of enhancing that awareness that there is a return on investment," Napier said. "That this isn't simply pouring money into a feel-good program, that this is an investment in what's most sacred to us—our children, our future."

Burke said the organization has been doing work across the nation since 1996, but they are amping up their efforts in Arizona because of an urgent opportunity in the state legislature.

Last legislative session, lawmakers left $56 million of no-strings-attached federal child care development funds unused because they said they were unsure of how the Department of Economic Security would utilize it. Child care providers and advocates mobilized and overwhelmingly said those dollars should be used to fix the aging reimbursement rates.

In January, Gov. Doug Ducey released his budget proposal for the new fiscal year, indicating that he wanted to see half of the $56 million used to raise the reimbursement rates by 16 percent for DCS and 17 percent for DES, and the other half to be used as child scholarships for low-income families. If the legislature approves that aspect of the proposal, about 5,100 children could access high quality childcare that was previously out of reach.

Berk is optimistic this year, especially because Ducey has supported the use of the money. But, it's only drop in the bucket as far as fixing the child care crisis goes. He said Ducey's proposal would move the reimbursement rates up to about 2006 levels, but he is thankful that people are starting to understand this issue and realize its gravity.

Jacks agrees that $56 million is only a drop in the bucket, which is why she's pushing for Pima County Supervisors to include funds in their next fiscal year budget to subsidize early childhood education for all children in the county living below the 200 percent federal poverty level.

Similar publicly-funded child care models have seen success in cities such as Denver, Tulsa, San Antonio and New York, which have universal pre-k.

She believes more subsidies, whether from the county or the state, would go a long way to address Arizona's child care deserts as well.

"Since 2009, a vast number of child care centers have gone out of business because the subsidies went away, effectively, so they couldn't afford to stay in business," Jacks said. "Once kids come with a check, basically, those places will open back up and so the issue of where those children will go will be handled by the market for the most part."