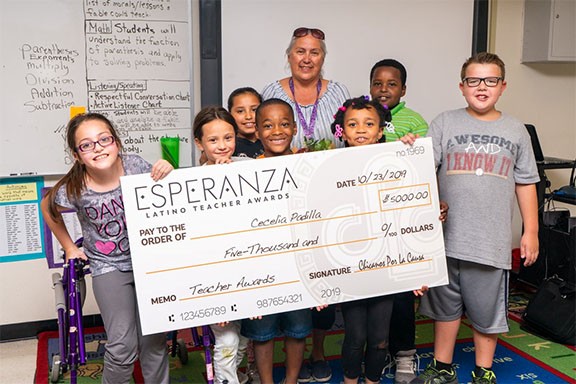 Courtesy photo
Cecelia Padilla poses with some of her third grade students at Cragin Elementary School.
As a child, Cecelia Padilla spent her afternoons dumpster diving around the Northern Arizona University campus. She collected discarded notebooks, pencils and paper.

After a successful haul, Padilla carried her supplies back home, sat her siblings and cousins down and prepared for a lesson. She was the teacher, they were her students. It was a childhood fantasy that solidified into a life-long passion.

"I would take all my stuff that I would get throughout the year from school, and then that's what I would teach to my siblings," Padilla said. "But I think in reality, I was teaching myself what I didn't get in the classroom."

Nowadays, Padilla teaches third grade at Cragin Elementary School. After a long and fulfilling career in public education, she was recently surprised with the Esperanza award. Provided by local Latino advocacy group Chicanos Por La Causa, the award is given to four outstanding teachers in Arizona each year. Winners receive a $5,000 cash prize and a $2,500 stipend is given to their school.

Wendy Johnson-Roe, a curriculum services provider at Cragin, nominated Padilla after hearing about the awards program from her supervisor. Johnson-Roe immediately knew it was a perfect fit.

"Cecelia has overcome extraordinary obstacles in her life to get to where she is today, and I nominated her because she embodies what the Esperanza award symbolizes," Johnson-Roe said. "Esperanza means 'hope,' and I view Cecelia as inspiring hope to her students, she motivates students to see beyond what is to what can be."

Padilla grew up in Flagstaff when it was still a small town of no more than 20,000. She was one of eight siblings. Her mom watched over the kids while her father did odd jobs: janitorial, assembly, trucking.

Their relationship was far from perfect.

"My parents met when they were born," she said. "My grandparents were friends, neighborhood friends. My mom and dad started liking each other when they were about 9."

They began to date at age 13, and Padilla's mom became pregnant with her first child at 16.

Padilla remembers her father being immature throughout her upbringing, while her mother was committed to religion. She would encourage Padilla and her siblings to read the bible, go to Catechism and attend Sunday mass each week.

"My mom gave us that side and my dad was—not so nice," she said. "I guess he still had to sow his oats, I don't know. Immature. Lot of drinking and gambling and a lot of violence. I guess because of that, in that era and in that time, you didn't leave your husband. And as a Catholic, you really didn't leave your husband. So, we grew up like that."

Padilla's time in school was not much better than at home. She grew up angry and rebellious after years of interactions with teachers that didn't like her and didn't bother to understand her.

"School was rough; teachers were mean," she said. "I got sent to the back of the room, because I'm brown. All the blue-eyed, blonde-haired kids sat in front. It was rough. But I made it through."

Despite experiencing a school system with all white teachers that didn't account for her reality, she still loved education and craved to teach others.

"Isn't that ironic? You would think I would go totally the other way," Padilla said. "But I remember being really little, like first grade or second grade, and crying telling myself, I know there's good people, and I know there could be good teachers. I just don't know where they're at."

She did meet one, a sixth grade history teacher named Mr. Cromer. Before meeting him, Padilla didn't like history lessons in school because they either told false stories or completely omitted her Latino and Indigenous cultures.

"Mr. Cromer taught our history. He taught African American history, he taught the Native American history, he brought it all in," she said. "He made a big impact on me. He made me realize how much I had lost in those five years of not doing anything in school, how smart I was, and what my potential was in the future."

Her eyes were opened to brighter possibilities, but the road ahead was still riddled with obstacles. The summer of her junior year of high school, Padilla began dating a boy she knew from childhood. By senior year, she was pregnant. Six months later, she experienced a miscarriage.

Not long after that, Padilla had her first child, a son, and her daughter followed a few years later. Her high school boyfriend soon became her husband.

"I was a very angry person," she said. "I still didn't know how to cope with the anger from when I was real little. I was rebellious, and so within the marriage it was dysfunctional because he was young too and he did a lot of drinking."

Seeing a cycle beginning to repeat itself, Padilla physically defended herself when her husband would try to hit her.

"I used to see what would happen with my mom and I always said nobody is ever going to do that to me, so I held my own," Padilla said.

About 14 years into their marriage, Padilla caught her husband having an affair. She decided to divorce him and leave—no easy task. Her mother was close to him, and her two children were very hurt by the decision.

After her marriage ended, Padilla continued to experience domestic violence in other relationships. Fleeing an abusive partner, she moved to Tucson with her young daughter. Her son wanted to stay with his dad, but later joined her.

In a new city with no car and two children to care for, Padilla decided to go to college. She enrolled at Pima Community College, where she found a program called Women In Progress. She said it was her backbone to getting back to school and becoming successful.

While working and attending classes full-time, Padilla was also a volunteer at various schools helping young students with their reading skills, as she often did in Flagstaff. She eventually earned a degree in education from the University of Arizona and began making her mark on a younger generation of kids who grew up like her.

Padilla has worked in alternative high schools with teenagers who were expelled from other schools or were at risk of flunking or dropping out altogether. She's worked with English Language Development students, her true passion. At Holladay Magnet Elementary School, she spent years with a classroom full of Spanish-speaking students and bonded with their parents.

"Now I can focus on my students and give them what I didn't get as a child in school," Padilla said. "More understanding with students that, their culture, their culture from home impacts their education. So I can be that person that can say I've been through that, I know how to help, I know what I can give this child what I didn't get as a child."

Her ability to connect with children and help them succeed hasn't gone unnoticed. The Esperanza award symbolizes a lifetime of overcoming barriers and inspiring others to do the same.

"The award was an honor," Padilla said. "I know that I received the award for my road in my life, ups and downs, my tribulations, and overcame them and became a teacher."

When Cragin's principal surprised her in her classroom with a big novelty check and TV camera crews, Padilla immediately began to cry.

"One of my students was concerned because I was crying, so she came up to hug me and then all of the kids came up and they were hugging me," she said. "They brought over the check, it was so cute. The kids were screaming 'We're rich! We're rich!'"

Chicanos Por La Causa has given out the award for the past 21 years. The organization sees education as an "economic equalizer" and finds it important to highlight local teachers who are making a difference in the lives of future generations.

"We started this program because we understand that aside from parents, the most important individuals in the lives of kids up to 18 years of age are the teachers," said María Jesús Cervantes with CPLC. "If our students see themselves in these teachers, if they learn, if they know about the stories, the struggles, how they got to where they are today, then they become an inspiration for them to continue and also aspire to be role models like their teachers are."

Padilla will be honored along with three other winners at a special ceremony Wednesday, Oct. 23 at the Gammage Auditorium at Arizona State University.

"I was meant to come to Cragin, because I loved every minute here," Padilla said. "I've been known as 'Sargent Padilla' because I have high expectations and that includes behavior. A lot of kids will get out of hand at Cragin and the teachers will send them to me. They'll just sit in the back and be as good as can be."

Padilla's fellow teachers tell her that students at the school seem to gravitate towards her.

"I said it's just a safe place and there's no put down, no judging," she said. "It's a safe place for them to find some refuge."

With retirement on the horizon, Padilla is looking forward to new goals. She hopes to publish a series of children's books that will focus on how to deal with anger and trauma. She also wants to help other women who have experienced domestic violence, and talk to them about how she turned her life's obstacles into positive outcomes.

"Today I'm standing strong. I love me," Padilla said. "I finally can say that. I know a lot of women out there who can be successful and get to where I'm at, at least within their heart and with themselves. Just to say 'I love me,' it took me all these years."