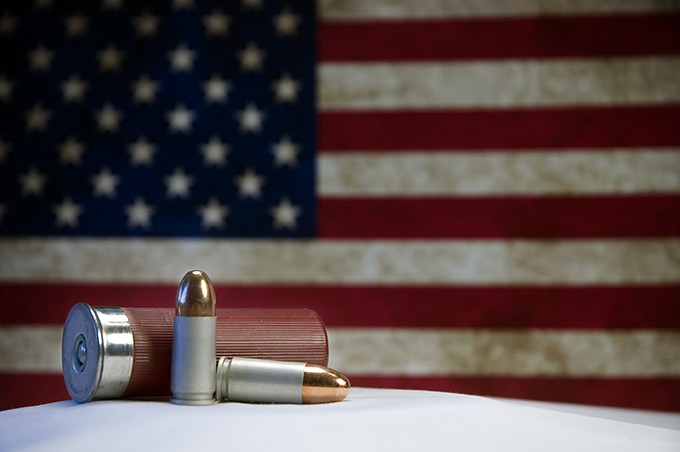 Land of the free, home of the dead,

For more information on the March 14 National School Walkout, go to Action Network or the facebook page.

For more information on March for Our Lives, go to their facebook page

Or you can find all the event listings and times here

A week after 17 people were killed in a mass shooting at Marjory Stoneman Douglas High School in Parkland, Florida, an Amphi Public Schools principal sent an email to parents saying they would hold a couple lockdown drills in close succession to practice for the unexpected.

The district has always held lockdown and evacuation drills, in accordance with state mandate. CDO reviewed their current protocol for lockdowns and made some tweaks, hoping it would better prepare and protect students and teachers.

The school is now talking to kids about being prepared in the event of an emergency, but they, like many other schools, shy away from talking about causes or solutions to our current national plight.

Bulleigh said CDO educators can't talk to students on political topics—which the issue of school shootings has become—except inside the confines of a government class.

"We're not addressing guns, specifically, or what people are voting on," she said.

When CDO parent Aaron Parkey received the email, explaining the school would hold a planned drill then a later surprise drill during a passing period, he was not pleased. He compared an active shooter drill to when kids were taught to hide under their desks in the event of a nuclear attack during the Cold War.

"My kid is 14, and under pressure, he melts down like a 5 year old—as do most 14 year olds," he said. "If underage kids had the ability to react under firepower, we'd still be inscribing 14-year-old kids into the army."

The Marana Unified School District does drills as well. Marana also has locked campuses with one point of entry, and students in middle and high schools are required to wear ID. They have resource officers at all secondary schools, counselors at all schools and a "speak up" 24-hour tip line.

"I think it's vitally important that our community continues to work together having as many eyes and ears as possible," said MUSD Director of Public Relations Tamara Crawley. "We take every threat seriously, and they are investigated seriously."

But they don't talk about school shootings in classrooms, Crawley said. The only students talking about that with school staff are high school leadership students in talks with administrators.

Parkey is pissed the schools are focusing on emergency training in lieu of teaching kids to advocate for themselves on the issue of school shootings. He wants the schools to teach kids to be more political and civically engaged.

A week after the Florida school shooting, students at Tucson High organized a walkout to the court house. The school didn't support the protest and instead organized a forum, led by several teachers and student leaders.

"While we understand the right to protest, please know that our students' safety is important to us, and this is why we ask that they do not walk off campus where we cannot guarantee their safety," Tucson High principal Shawna Rodriguez wrote in an email sent to families that afternoon. "Instead, we ask that they join in the on-campus forum where they are heard and can voice their concerns.

Tucson High also encourages students to report anything suspicious they see, and students are required to wear ID while on campus, but students who participated in the walkout received an unexcused absence.

TUSD does not physically stop students who walk out in protest, but they encourage them to stay, said Interim Communications Director Michelle Valenzuela. In the past they've held "talk outs" to give students a way to express themselves.

A walkout is not only about the students expressing themselves; it's about them being heard. Tucson High parent Patty Valera said she totally understands it's not safe for kids to leave the school unattended, but she would like to see the school enlist educators and parents to walk out with them if protest is what the students want to do.

"That sounds really radical, but nothing is radical anymore," she said. "I don't want my daughter to get murdered."

She says students have a civic right to protest, and she believes it could make a difference.

Valera is no stranger to civic duty or gun violence, as she worked in the congressional office of Gabby Giffords at the time a crazed gunman opened fire during a 2011 Congress on Your Corner event, killing six people and injuring 13 others. Among those killed was Valera's friend and colleague Gabe Zimmerman, an aide to Giffords. Valera says she knows protests and walkouts have an impact on lawmakers.

"I tell my daughter, 'If you walk out, you have to have a goal, and the goal could be telling representatives that you want change,'" she said. "People are watching right now, and our kids are making a difference that the adults couldn't."

The Marjory Stoneman Douglas shooting is different than the many school shootings before it in one main way: The teenage survivors are calling for action. They're calling for common-sense gun control and are encouraging their peers nationwide to join them.

There are currently two planned school walkouts: the National School Walkout, on March 14, and the March for Our Lives, on March 24.

The National School Walkout is planned by Women's March organizers and will be held at 10 a.m. in each time zone. It calls for students, faculty and parents to walk out of school for 17 minutes—one minute for each life lost in the Marjory Stoneman shooting.

The March for Our Lives is scheduled at different times, in over 75 cities nationwide, with the main one in Washington, D.C. This event is not currently planned in Tucson, but there's one in Phoenix, at 10 a.m., with over 16,000 RSVPs.

If Valera's daughter decides to walk out in protest to Congress' inaction on gun violence in schools, Valera says she'll be right there next to her, and it's crucial "for youth to know adults are with them and behind them."

Correction: Tucson is holding a March For Our Lives on March 24, meeting at 11 a.m. at Armory park and marching down Fourth Avenue.