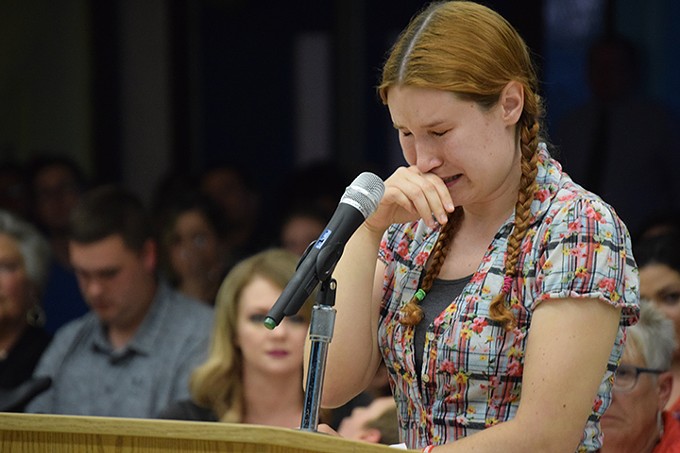 Danyelle Khmara
Thornydale parent Jacqueline Stein: “This school has been a miracle for our family. Please don’t take my son’s voice away. I beg you, from the bottom of my heart and soul, to keep this school open.”

Tears and heartfelt pleas dominated the Marana Unified School District Board Meeting last week, as over 300 people squeezed into Thornydale Elementary School to discuss its possible closure. Many were wearing shirts that read #SaveThornydale. There was still a line out the door into the parking lot as the meeting got underway.

Parent Jacqueline Stein told the board that of all the schools in Tucson, she hand-selected Thornydale for her son with autism. She said he has difficulty speaking, but after only four months at Thornydale, he's learned to sing.

"This school has been a miracle for our family," she said, through tears. "Please don't take my son's voice away. I beg you, from the bottom of my heart and soul to keep this school open because I don't know what kind of future he will have if you close it."

At the beginning of March, MUSD notified parents that the Governing Board would consider closing the K-6 school on North Oldfather Road, just north of West Ina Road, due to declining enrollment. The district attributes this decline to a maturing neighborhood, noting there are no new home developments on the horizon.

About 45 people made their case for keeping the school open: educators, students, graduates, neighbors and even entire families, generations of people who'd fallen in love with the school. Many people said they bought their houses to be close to the school. Others said they drive a significant distance everyday to send their kids to the school. A common theme of the night was that the community at the school is like family.

"This place is my second home. These people who stood before you are my second family. This is a community," Kristen LaRosa, who was a student at Thornydale around 20 years ago and volunteers at the school, said to the Board.

Many of the parents who spoke during call to the audience have children with special needs, and said they saw enormous growth in their children since coming to the school.

Parents of kids with autism talked about how hard change is for their children, a number of whom, like Stein, said before coming to the school their children were non-verbal, and the school helped them learn to speak. A lot of these parents also said their children tried other schools in the district and didn't get the attention they needed there.

"Kids with special needs are sensitive to change," said Shauna Quintero, who has a son with special needs at the school. "They aren't merely an afterthought or a budgeting decision or even a boundary that refuses to move.... While you can redistribute the kids and move them around to shinier, newer schools, you can't recreate the culture that has taken decades to create here."

Thornydale is currently the only Title 1 school within 12 miles, which means it offers programs and support for low-income and educationally-disadvantaged children. But Butterfield Elementary, about two miles away, is becoming a Title 1 school for the 2018/19 school year, according to MUSD Director of Public Relations Tamara Crawley.

And while no one seems to doubt Thornydale's greatness, public schools receive funding based on how many students they have. Thornydale enrollment has declined from close to 500 students to just over 300 over the past eight years. Small class sizes is part of what a number of these parents love about the school, ironically, one of the very reasons the board is questioning the school's financial viability.

According to MUSD Superintendent Doug Wilson, the average per-pupil expenditure at Thornydale is $6,197; that's $1,472 more than other MUSD elementary schools, which comes out to $461,000 more annually.

"District administration's recommendation to close Thornydale due to declining enrollment is not one that is taken lightly," Wilson said at the meeting. "However, as superintendent, it is my fiscal responsibility to ensure school sustainability for the 12,200 students we serve and be responsible for the resources entrusted to us by our taxpayers."

If Thornydale closes, attendance boundaries will be redrawn to send students in the neighborhood to either Butterfield or Quail Run elementary schools. Both are within a two mile radius, and have capacity for growth.

Butterfield will have the Title 1 services, and students will be able to receive the same special education services at one of these schools, Wilson said. The district will also provide transportation. And, like Thornydale, both schools have breakfast in the classroom, reduced and free lunch, counselors and health services and an active parent-teacher organization.

Wilson also said the district anticipates that all Thornydale teachers, staff and administrators will have a new position at another K-8 school within the district, provided for by the 2014 School Improvement Bond and from attrition at other schools.

A number of families said that if the school closes, they will leave the district, including Nicole Pogue, who spoke to the board standing next to her husband and four kids. The entire family, including the parents, are all either graduates or current students of the school.

"When you vote next month, these are real lives, these are real people that your vote effects," Pogue said. "And sadly enough, if the choice is made to close Thornydale, all four of my children, four of my nephews, two of my nieces will all be pulled out of Marana schools."

A suggestion, brought up several times, was that the district redraws boundaries to funnel more kids into Thornydale.

Board Member Suzanne Hopkins said in an interview that redistricting is not an easy option: It would mean Thornydale would lose the small class sizes the families love, and it's also unfair to families in other schools that would have to switch because of a redistricting.

A few attendees suggested the board put off the closure for a couple years, in the hopes that after Ina Road construction is finished, more families will want to enroll their kids in the school.

Brian Bouffard, an Ina Road business owner who's live in the area since 1985 and whose son went to Thornydale 25 years ago, said it's not fair that Marana asked all the businesses on Ina to "stick it out" until construction is over, but the board doesn't have to do the same before deciding whether to close the school.

"The road construction on Ina, when it's done, this neighborhood will thrive," he said. "There's going to be a bunch of new businesses on Ina, gonna create new jobs, new families are going to move into this neighborhood. That's the future of Thornydale."

Board president Tom Carlson is skeptical that the completion of Ina Road construction would bring in new families, given that it's all businesses. But he said the testimony of the families was powerful and moving, and the decision is not a done deal.

"We are considering all options right now," Carlson said. "Everything's on the table."

Community members can share their thoughts by emailing MUSD6@maranausd.org or using MUSD's "Let's Talk" communication tool at maranausd.org/letstalk. The Governing Board has a tentative vote on the closure scheduled for Thursday, April 12, at 7 p.m., during the regularly scheduled board meeting at the Marana Municipal Complex, 11555 W. Civic Drive.