Local students have had enough of gunplay 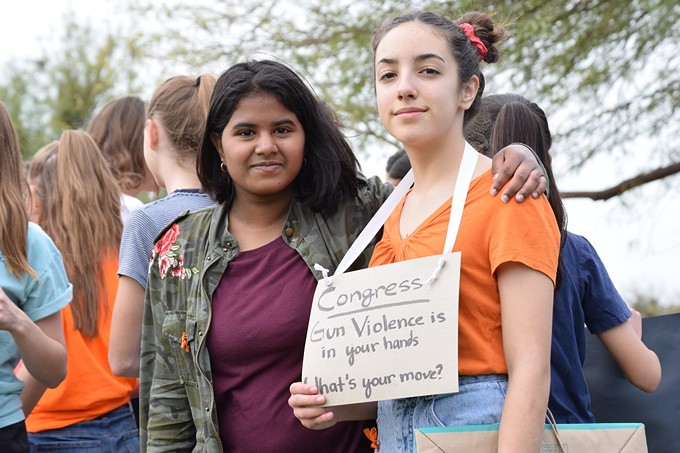 Pueblo Magnet High School students filled the bleachers on Wednesday, March 14 for a moment of silence and to hear their peers give compelling speeches about ending gun violence.

"We have grown to fear coming to school, thinking that maybe today will be the day that changes our lives forever," said senior Emily Gastelum. "In this past month we have seen a lot of action, action from people like us. Students are leading this. Students like you and me are paving the way for the future. You have a voice. You have something to contribute no matter how young. No matter your race. No matter your gender."

At the close of the assembly, students set up tables where teens who were already 18 or closing in on that birthday could register to vote. Locally, 45 high schools and middle schools across six public school districts held events, unequivocally calling for Congress to act on their behalf. At the Flowing Wells High School alone, 68 students registered to vote in the midterm elections.

Across the nation, students remembered the 17 lives lost in a Florida school shooting and protested gun violence on National School Walkout Day—the one-month anniversary of the Marjory Stoneman Douglas school shooting in Parkland.

Close to a dozen students took to the podium at Pueblo High to share their outrage at lax gun laws in a time when mass shootings are on the rise, not just in schools but in churches and at music venues.

Senior C.J. Barbosa said his generation is going to be the one to enact gun reform, and they're going to accomplish it through small steps and compromise.

Representatives from U.S. Rep. Raúl Grijalva's office spoke, as did the congressman's daughter, Tucson Unified School District Board Member Adelita Grijalva. They told the students that while they are young, they have the power to create change.

Gastelum closed her speech with a quote from writer and political activist Elie Wiesel: "What hurts the victim the most is not the cruelty of the oppressor but the silence of the bystander."

"Today, we are not silent," Gastelum said to hundreds of her peers. "Today our voices as children and students are shaking this nation. Today and forever we have power. Together we can make the future in our image—our beautiful, colorful, powerful image."

At Orange Grove Middle School, more than 500 students marched around their football field, chanting and holding signs calling for gun regulation and an end to gun violence. The march was organized by a group of five 14- and 13-year-old girls. Marching, they wear orange, a color adopted to represent resistance to gun violence.

They were in awe by the numbers of students who showed up to take part in the march.

Organizer and student council member Naomi Holtzman, 13, said it's amazing how their protest "was nothing, and suddenly it became everything."

About a dozen kids on the march chanted "Guns save lives" and held anti-regulation signs. The girls organizing the march say some of their best friends are against gun regulation, and they're fine with others having differing opinions.

Student leaders ended the march by standing in front of their peers. They held signs high above their heads with the names of those killed in the Florida shooting. The student body knelt before them and held a moment of silence.

Students at the Canyon del Oro High School held a walk-out to their football fields at 10 a.m.—the time that students held 17 minutes of silence nationwide, for each of the lives lost at the Florida school shooting.

The walk-out was organized by student leaders who were clear that the walkout was not about gun control, but a call to Congress and local leaders to act on behalf of students to stop mass shootings in schools.

One of the student organizers, junior Rebecca Shanks, said it doesn't matter what a student's opinion is on how to fix the problem. What matters is that you speak up.

"It's really important that students are getting a voice and being heard by adults," Shanks said. "We are fed up by gun violence, and we want something done about it."

Shanks knows the effect of mass-shootings personally, having gone to elementary school with Christina-Taylor Green. Christina-Taylor was the youngest victim of Tucson's 2011 mass shooting during then-Rep. Gabrielle Giffords "Congress on Your Corner" event, killed before her 10th birthday.

Roxanna Green, Christina-Taylor's mother, attended the event at CDO, silently standing in solidarity with the students and victims of gun violence.

The student leaders at CDO purposely shied away from talking about gun regulation because they wanted the march to be inclusive of all views. It was hard to find any signs demanding gun control, but there were a faction of students supporting gun rights, holding a "Don't Tread on Me" flag.

One of these students was CDO junior Oscar Orozco. He heard other students talking about the protest as being for gun control and a memorial for the lives lost. He sees gun control as infringing on Second Amendment rights and so asked a few friends if they were "interested in going to the memorial and showing our respects and protest for the Second Amendment."

"If they have a right to go protest, we too have the right," Orozco said.

Nationally, youth across America are calling for gun control, but at CDO, Orozco says the student body is split on the issue. He tries to talk to people with different opinion, and admits that sometimes it does become heated.

He thinks the answer is more armed security in schools, as well as arming teachers. But he thinks when it comes to gun control, there could be a middle ground. Rather than two sides, there could be one side looking for a compromise to solve the problem. Orozco will be 18 in September and says he may vote in the midterms.

They are painting 3,300 coins—one for every student and faculty member at the Parkland high school, and each one is labeled with one of about 130 names of people killed in school shootings since the Columbine High School shooting in 1999, as well as Christina Taylor Green.

Standing in the middle of her peers at BASIS North, junior Corazón Núñez asked them who remembers when Gabby Giffords was shot. Most of them raise their hands. They would have been ages 7 to 10 at the time.

"One of the people who died was Christina-Taylor Green—9 years old," she tells them. "Today, she would have been 16. She could have been a part of this crowd. She could have gone to our school. But that future was taken from her. We deserve to grow up without the fear of getting shot. Our parents deserve to send us to school without worrying that we might not come home. We all deserve a change."

Students at BASIS held a 17-minute vigil, at 10 a.m., for the people killed in Parkland, Florida.  At the beginning of each minute, someone spoke about each victim. Public officials spoke about the importance of common-sense gun reform, including Victoria Steele, a Democrat who is running this year to return to the Arizona Legislature.

Steele co-sponsored a number of regulatory firearm bills in the Arizona House of Representatives, but her legislation never even got a hearing. She says the youth today are sending a message to Republican leadership in Arizona that if they don't start listening, they'll be replaced.

"[Students] are the power. They are our hope right now—these kids," Steele said in an interview. "I don't want them to think for a minute that because they're young and they don't vote that they don't have the power."

Núñez is turning 18 this year and will vote for the first time in the mid-term elections. She says common-sense gun regulation is one of the issues she'll base her votes on.

"This is a priority for myself and many of us," she says. "I will definitely be looking at NRA endorsements.... I want to know that Representatives care about their constituents and not the NRA."

The student-led movement #NeverAgain is only gaining momentum with the upcoming March for Our Lives.

Officials in Washington D.C. prepare for upwards of a half-million people to march on the nation's capital. The nationwide rally for better gun regulation and school safety measures—started by student survivors of the Marjory Stoneman Douglas shooting—is set to take place in hundreds of cities around the country.

In Tucson, thousands have RSVPed on Facebook to attend the local event.

March for Our Lives Tucson is at 11 a.m. on March 24. It begins at Jacome Plaza, 101 N. Stone Ave., and marches down Fourth Avenue to the University of Arizona, where there will be speakers until around 4 p.m.