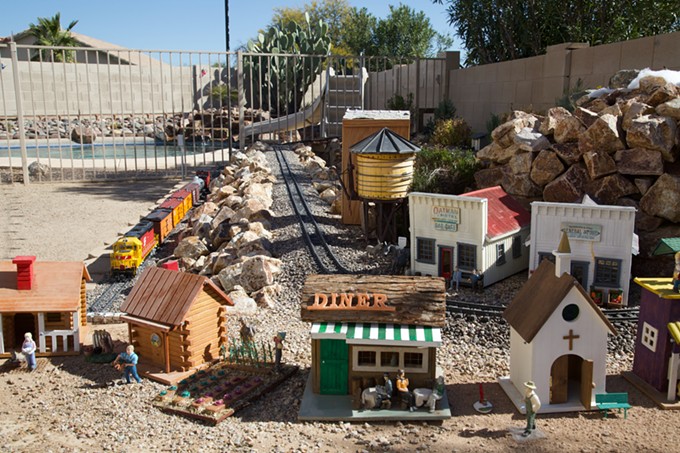 G-scale train collectors are opening their gardens to the public for the 20th Rails in the Garden self-guided, self-paced driving tour from 10 a.m. to 4 p.m. Saturday, March 5, and Sunday, March 6.

“This is a great, fun-filled weekend for the young and old,” says Chuck Cook with the Tucson Garden Railway Society.

G-scale trains are suitable for use indoors or out and the large size, rugged construction, and exacting detail make this scale a favorite with modelers.

The event is a fundraiser for the Community Food Bank of Southern Arizona and the train club. In recent years, the tour generated more than $8,500 in donations for the food bank.

The Tucson Garden Railway Society is a nonprofit that promotes model railroading, preservation of railroad history and railroad safety throughout the Tucson metro area.

“We have a large modular layout that we take annually to The Pima County Fair and the VA Hospital for multiday displays,” Cook says.

“In addition, we have a smaller children’s layout that we take to train shows and children’s charity events throughout the year. G-scale are the largest model railroads that are available for the average people.”

During the tour, patrons see trains running in eight to 12 member layouts.

“It’s a chance for people to get out— especially during these COVID times,” he says. “About 80% of the layouts on this year’s tour are outdoor railroads.”

Previously, the nonprofit charged for the tour, but it has been free since it earned money for co-sponsoring the national convention. This way, more families with young children can head out on the tour.

The layouts are primarily in Tucson, but there are two in SaddleBrooke. For Cook, this is a dream to work with the trains.

“I’ve always been a fan of trains,” he says. “Like anything else, I put them away for a while and raised kids. I happened to see the layout at the Botanical Gardens in Tucson. I was just fascinated by the size of them and the idea that we could do it outside.”

“While I’m driving, I’m probably the only guy who comes up to a railroad crossing and hopes the gates come down so I can see the real trains.”