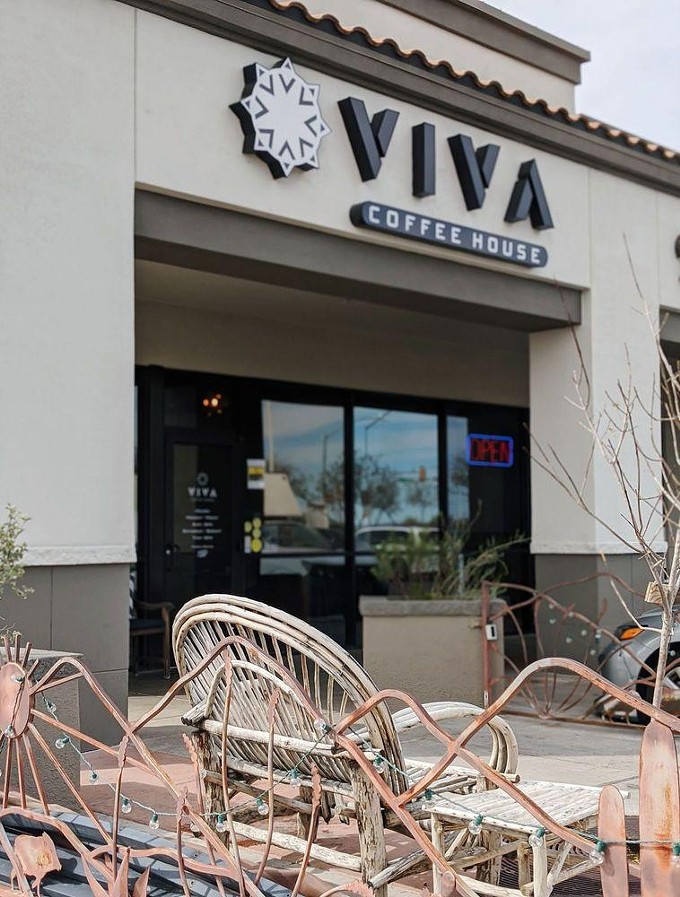 Editor's note: Following further reporting, the Tucson Weekly has updated and revised the article “Troll Trouble” (October 29). The updated story is below.

Several people who have been critical of Vail's Viva Coffee House over issues relating to facemasks have found themselves facing online harassment, including having photos of their homes posted on social media.

The latest doxing incident happened to a woman who expressed concern over the coffee shop's use of alt-right symbol Pepe the Frog, which the Weekly pointed out in A Bitter Battle (Oct. 14)

Heather Harvey's original comment on a Weekly Facebook post stated: "The Pepe the Frog image in this is concerning since it had been made a right wing, white supremacy emblem."

Replies to her comment started trickling in, but Harvey's troubles started after agreeing with another commenter that she would "steer clear" of the coffee house.

An account using the name Sam Wass (which appears to be a fictitious name) looked up Harvey's information on her Facebook account and then commented she shouldn't say anything since she lived in Phoenix and was just "virtual signaling." Harvey fired back saying she actually lived in Tucson, but didn't "advertise it" because of unstable Trump supporters. She also corrected Wass' use of "virtual signaling," stating "virtue signaling" was the proper terminology.

The online socio-political discourse quickly devolved once Sam Wass made a veiled threat that Harvey should have "a more locked down profile" and the woman made a crack about Wass' manhood. Then he doxed her—searched and released private information online with malicious intent.

"This all started because I called him an INCEL (involuntary celibate). Immediately, he said 'Oh you need attention. I'm going to give it to you' and it escalated from there," Harvey said. "He found photos of my house right away and posted them to his page."

Once photos of her home—with a photoshopped Trump sign in front—and photos of herself were posted on Wass' page, others began commenting about "wanting to do weird things with her butt." Disgusted over what she had just read, Harvey quickly blocked the account. Within minutes, another account named Cherry Holtz commented on the thread: "You can keep blocking. it's just starting moron."

"I'm not even sure how (Wass) was able to get photos of me because my account is set to private. But I noticed, when I was on his page, it had to be a fake account," Harvey said. "It had multiple fake accounts commenting on his page. I don't know if this person is creating a bunch of fake accounts and then, like, communicating with this fake account. It's all very strange."

What does any of this have to do with Viva Coffee House, you might ask?

The Weekly has received several tips from people who have experienced online harassment and doxing after interacting with Viva Coffee's Facebook page since August—around the time the business was put on Pima County Health Department's Wall of Shame for failing to implement a mask policy for employees during the pandemic.

In mid-September, the Weekly received tips from two women who say they got into arguments with people on Viva Coffee's page after commenting about how they wouldn't be patronizing the establishment anytime soon due to their anti-making stance.

Local artist Jenn Hopkins began to receive a cascade of negative reviews on her art page from fake accounts in an attempt to lower her business' star-rating on Facebook. Hopkins said she thought it was strange the majority of complaints from those fake accounts were coffee-related.

One of those accounts, Rob R. Read, posted screenshots of his "review" stating Hopkin's failed to paint a cup of coffee he commissioned on Kelly Walker's page. Read's comment stated, "Leave a negative review for Viva, get one left for you."

Viva owner Kelly Walker also responded on the Facebook post: "Well, I guess if someone is going to throw stones, there's the possibility some might ricochet."

"There were so many fake accounts and it got really scary, really fast," Hopkins said. "When I saw that post where Walker responded I knew this was about the negative review I left Viva over a fucking month before."

Her friend, Kat Stratford, came to Hopkins' defense online and started mixing it up with the trolls. Soon after, Stratford was doxed by a fake account under the name of Seven Maldonado, complete with photos of herself and her home posted online. The troll even posted a photo of a tombstone with Stratford's name on it. Hours later, her Facebook page was memorialized, just like Parkey's was a month earlier.

The mother of two was not amused and ultimately moved from her home.

"I commented on the fake review and within minutes of posting that, I had a text message on my phone saying that I was easy to find," Stratford said. "I'm a single mom and I have two young kids. I was pretty terrified."

Two other women, Mindy Ellis and Geneva Karr, reached out to Hopkins saying similar things happened to them after leaving negative reviews for Viva Coffee House—Ellis was doxed and Karr received "super inappropriate and creepy" phone calls even though her number is unlisted.

Hopkins and Stratford have tried to get Walker served with an injunction against harassment, but Tucson Municipal Court Judge Antonio Riojas denied their request due to lack of evidence. Harvey tried to get the Tucson Police Department involved but the officer she dealt with "became combative and dismissive" when she mentioned Pepe the Frog and suggested she reach out to Walker, she said.

All of the fake accounts trolling Harvey, Parkey, Hopkins, Stratford, Ellis and Karr are associated with a fictitious company sporting a name that would make Bart Simpson proud—Maikhunt-Hertz Consulting Services. The page is filled with alt-right memes, just like each one of the troll accounts.

Walker vehemently denies having anything to do with any online harassment these people have received after interacting with his business' Facebook page. He also denies knowing that Pepe the Frog is an alt-right symbol. In a text, he said he "simply searched for red-headed frog" and used the first image he saw. The picture in question was Pepe the Frog with red Wendy's pigtails.

Suspected fake troll Sam Waas has a similar photo posted on his account of the notorious meme Trollface, with an identical Wendy's hairdo.

Turns out, the red pig-tail symbol is related to an accidental 2016 Twitter post by the burger chain, which members of the alt-right have been using as a dog whistle for the past few years and was recently added to the Anti-Defamation League's list of hate-symbols.