With help from friends and fans, the Chocolate Iguana has a new home in a familiar spot 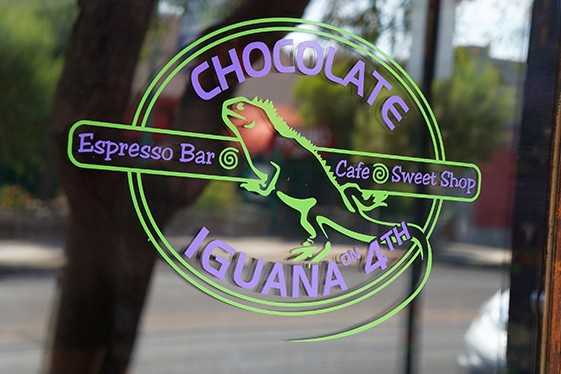 Mark Whittaker
The Chocolate Iguana is back!

Well, when the venerable Chocolate Iguana was set to shut down, it seemed that Tucson suddenly morphed into that half-crazed fictional fogey and declared "Save the Iguana! Save the Iguana!"

It makes sense that our community would be a part of such a noble crusade. I mean, who would want to put a lovely sweets-and-snacks café with an adorable purple awning out of business after more than a quarter century? Turns out the property owners planned to open a coffee shop, although it has yet to open its doors.

"It makes me sad to just see the corner shop just sitting there empty," says Ali Simpson, daughter of Chocolate Iguana owner Marci Conklin. "But so far, people have really warmed up to our new location. If it wasn't for our regulars, we probably wouldn't have had this second chance."

If you don't know about the Chocolate Iguana, then you either recently moved here or have been living on the way outskirts of town. The Chocolate Iguana is an all-in-one hangout that started around 1991 in a hallway location by Tucson High School selling pastries, ice cream, sandwiches and coffee drinks. The fanbase grew to such a degree that they had to expand and find a new home, and that's where the shop on the corner of Fourth Avenue and Sixth Street came to be.

"I started working here when I was 14," says Simpson with an appreciative smile. "So, through the years I have seen students and our younger regulars grow up. And now they bring their own kids in! I even got married in the back of the old corner location. This is a family run business and our family is the reason we are still here."

Conklin was at first considering retiring and turning over the business to her daughters, Ali and Courtney, when the landlord let them know they had to move. But that's now on the backburner. According to Ali, Marci wants to wait until her grandchildren are a bit older and ensure that the new location gets off to a solid start as she gets a new partner acquainted with the daily routine of running the Iguana.

Shannon Reilly, owner of the Lindy's burger empire, offered the original Lindy's location to Conklin after word got out that the Chocolate Iguana was in danger of shutting its doors for good. The space might be a bit different, even smaller, but at least we still have the Chocolate Iguana around.

"For our customers, the change hasn't been that big of a deal, it seems," Simpson adds. "They were here at 7 a.m. the first day we re-opened, and told us that they love it. So far, it's business as usual and business has been good."

It is a bit surreal to walk into the Chocolate Iguana, seeing all the familiar candies, cakes and treats while knowing at one point it used to be the site of a famous joint with an insane OMFG burger-eating challenge.

But other than the location, little else has changed. The fantastic espresso drinks taste the same, the familiar turkey pesto sandwich is thankfully just as delicious and, of course, the signature house specialty drink—a double café mocha with mint ice cream, whipped cream, chocolate swirls and a delectable "iguana tail"—isn't going anywhere anytime soon. Tucson needs a place like the Chocolate Iguana. It just wouldn't feel like home without it.