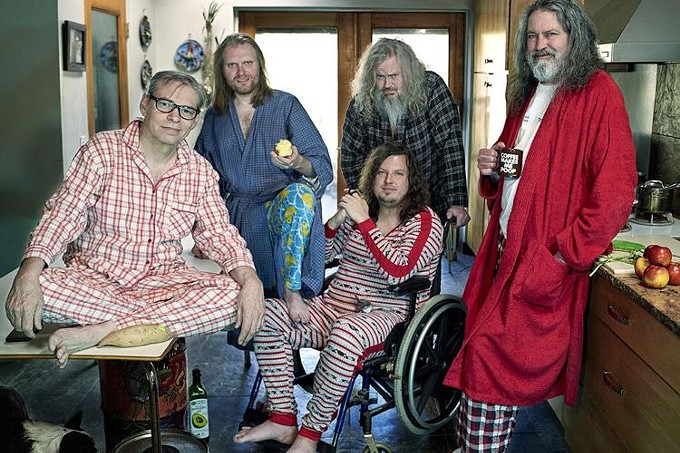 Meat Puppets’ drummer Derrick Bostrom is down on the music business.

He said he stopped paying attention to current music when the Spice Girls debuted. He’s frustrated that successful “musicians” these days are TikTok stars, those who buy ads on YouTube or trust fund children.

Hopefully, he said, this won’t happen on its current tour in support of Meat Puppets’ latest album, “Dusty Notes.” The jaunt co-headlined with Mudhoney comes to 191 Toole on Wednesday, May 18.

“Whatever annoyances and hardships come from going out on tour, playing together night after night, listening to the music evolve, more than makes up for it,” said the band’s leader Curt Kirkwood.

Kirkwood is joined in the band by his son/guitarist Elmo Kirkwood, bassist/brother Cris Kirkwood and keyboardist Ron Stabinsky.

For a reintroduction to Meat Puppets, they released “Meat Puppets Live Manchester 2019” on May 6.

During that run of shows, Meat Puppets met with videographer Yousef Sheikh and his crew, who not only captured a multitrack audio recording of the band during its show in Manchester, but also created a multicamera video production of it.

The band posted some of it during their pandemic-imposed two-year hiatus from touring, and when Darron Hemann of DC-Jam Records offered to release a limited-edition six-song picture disc based on the material, they jumped at the chance.

The band worked with Sheikh and Derek O’Brien of DOB Sound on a half dozen tracks, which highlight the improvisational passages they crafted while on the road.

Meat Puppets updated songs like “Up on the Sun,” “Plateau,” “Seal Whales” and “Lake of Fire,” while releasing a new track from their latest album, “Dusty Notes,” called “Nine Pins.”

“Yousef was fortunate enough to capture us on a good night,” he said.

“Sure, we were all exhausted, starving and half-sick, and the on-stage sound was terrible, but as this performance shows, sometimes that helps.”

“It’s not like we’re keeping them in rent money,” he said. “They just like us. For Record Store Day and with the resurgence of vinyl, we can do limited-edition releases for just about anybody or on your own and make just as much money with lower overhead without any real budget.

“The last three records we’ve done have all been limited releases or vinyl one-offs. We did a 10-inch, four-song EP in 2020 that was going to be for Record Store Day, but it was derailed by COVID.”

Similarly, their current tour with fellow ’90s alt rockers Mudhoney was sidetracked for two years because of the COVID-19 pandemic. In Tucson, Meat Puppets close the show. Bostrom said to expect a no-frills concert.

“We don’t have a lot of resources,” he said. “We are not Elton John. We do not travel with a large entourage We are very lucky if we don’t manage to stumble into our equipment and break it and have to cancel our next show.

“One of the things about this COVID deal that concerned me was just about exactly two years ago, we canceled our tour after baseball was canceled. I work for Whole Foods. I have a photo on my Instagram feed of completely empty shelves. It had absolutely no products in some parts of the store.”

He said he was angry with promoters who told fans that Meat Puppets shows were postponed instead of canceled, thereby not refunding their money.

“The clubs wouldn’t cancel the shows,” he said. “It was a very, very dark tunnel, business wise. They were saying the tickets were still good until the show was rescheduled. The problem is the tour from 2020 is routed very, very differently than the one we’re doing now.”

“Social media is such that the bands think they have a personal relationship with the band,” he said. “They’re messaging me saying, ‘Where’s my money.’ I told them to talk to the club, but they were saying the club wouldn’t give their money back.

“I went in and deleted all of these events from the band’s Facebook page. Some of the promoters freaked out. It was definitely desperate times.”

Rock & Roll Memories: Remembering The Days And Nights Of The Pedestrians