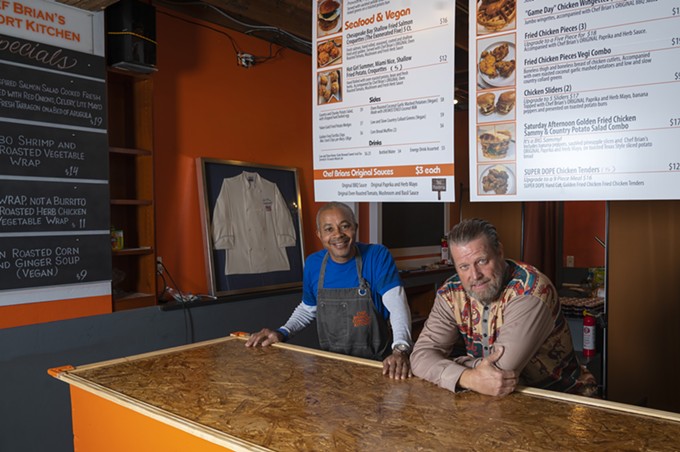 “Top Chef” contestant Brian Hill traveled from Florida to open a new restaurant in Tucson. While it’s a delicious addition to the vibrant Fourth Avenue food scene, Chef Brian’s Comfort Kitchen is also a chance at redemption for the restaurant’s namesake.

The fried chicken, seafood and even vegan dishes were all hand-picked from his experience in the industry. All of it is made to order with a mission for fresh and local; chicken is hand cut and never frozen while sides like collards are ordered from community growers.

But to get that “maximum flavor” of his meals, people must not look just to the food but to the story. Hill grew up in the poor neighborhoods in Washington, D.C. He fell in love with cooking shows on PBS and making meals for his family on welfare checks.

“I knew I had to continue because it was just too juicy for me every day,” Hill recalled. “That was the instant attraction. It made me smile. It made me happy.”

It was during this time he decided to make food his career, working his way from Domino’s Pizza to private chef for Mary J. Blige and other celebrities.

Hill made his TV debut on the first season of “Top Chef” and branched out to other shows like “Bar Rescue” and “Private Chefs of Beverly Hills.” Through his connections, he soon met Don Westover, an experienced stockbroker in the industry.

“We had an instant affection for one another, and I knew he was my brother from the day I met him,” Westover said.

They reconnected a decade later and opened a restaurant. This would be the third attempt in solidifying Chef Brian’s Comfort Kitchen. Not for lack of trying, but for lack of community support and even respect.

Hill started his first restaurant in Washington, D.C., but racism forced him out of his own business. With his second attempt, he opened in a food hall in Miami and was again driven out by discrimination.

Referring to the treatment, Hill’s vibrant and passionate eyes dimmed.

“That literally destroyed everything,” Hill said. “Racism has destroyed me, but I’m still Chef Brian.”

Now with Westover by his side, he’s back and ready to grace the community with his gingerly crafted cuisine.

The Hot Girl Summer, Miami Nice and Fried Potato croquette ($12): His mission was to make the entree entirely and consistently vegan. From the thin-fried crust to the inner potato mash, Hill makes his croquettes buttery, unlike other vegan dishes.

He claims the secret to the creamy texture is the ingredients and cooking process. What’s more, Hill affirms the golden crisp comes at the golden number — 350 degrees.

The entree comes with oven roasted tomato, basil and mushroom sauce. Creamed with coconut milk, it’s the icing on the cake — or sauce on the croquettes — that affirms it is 100% percent animal-free and ready to eat.

The chicken sliders with original paprika and herb sauce ($9) were created when he was Blige’s chef. In 2005, he made these small and mighty sandwiches for her kids, cooking the chicken in his delicate, artful process. He proclaims again, everything that makes the entrée work is that mix between ingredients and cooking.

The sliders have two hand-cut, never frozen pieces of fried chicken stacked with a toothpick skewered through the bun. The browned bread is then lathered with Hill’s mayo. Lastly, he forgoes the cliché pickles in favor of a little spice, laying one to three banana peppers into each slider. With Hill, the dish is an artform. The chicken is savory, the mayo is salty and creamy, and the syrup is sweet. All is snuggled into a warm waffle bed, flavored with cinnamon for another “pop.”

Guests are invited to wash it down with the Low and Slow home-styled brewed sweet tea ($6.25). Hill drips the “suga with an a” in as the black tea slow brews on the stove. While finding the right sweetness, he worked to find an “in between” to the overall community and his own roots. Served in a 16-ounce mason jar, customers can enjoy their tea slow or on the go.

For Hill, it’s a pleasure to bring his food to Tucson. Westover affectionately calls him the “introductory factory,” watching him wave to everyone who passes, sharing his vibrant persona with whomever he meets.

“This place is so warm, and I’m not referring to the weather,” Hill said about Tucson. “If you just look at what people are giving you, you give it back.”

It’s a long time coming for Hill to share his warmth and feel it return to him. After so many losses and sacrifices, he is determined to live out his passion in the words he says and the food he creates.

Chef Brian’s Comfort Kitchen strives to provide more than comfort in its food. Hill and Westover’s mission is to ensure everyone feels welcomed and appreciated.

“We are always going to represent the disenfranchised and underprivileged and bring race into the conversation,” Westover said. “It’s not over. We’re going to keep talking about it.”

24 reasons to go out for Christmas dinner