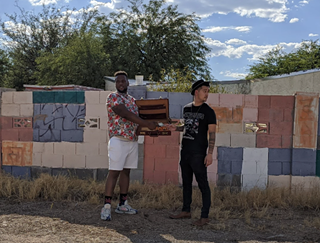 Rooster has teamed up with Jean-Paul Wiegand, also known as "The Overshadow," to drop a new album, Cheese and the Wiz, which is loaded with diverse sounds and lyrical authenticity.

Rooster, 33, and Wiegand, 31, recently began collaborating on music after they became neighbors and good friends in Tucson. Rooster made his way to Tucson two years ago from Portland with his wife and three children and currently works as a barber while also making music.

Wiegand moved to Tucson from Massachuets to pursue a PhD in neuroscience at the University of Arizona. Over time, the two bonded over their dogs interacting with each other and eventually discovered that they held very similar music tastes.

Those music tastes spread over the 10 tracks of Cheese and the Wiz, released this summer and currently available on Spotify and Apple Music. While the album contains modern production and hip-hop delivery, it balances those with more timeless themes on tracks like "Babylon" and "Ikkkarus."

Wiegand's musical journey began in high school when he picked up the electric bass. After learning the bass, he dedicated much of his time to creating as much music as he could and released his first album from his bedroom at 17 years old.

Recently, Wiegand began to expand his musical tastes and experiment with production, making beats on FL Studio and trying out more instruments. Alongside finishing up his PhD in neuroscience, Wiegand spent much of the recent quarantine producing music.

While Wiegand worked on the beats for Cheese and the Wiz, Rooster wrote the majority of the lyrics. He says the lyrics are based off of real moments that both himself and Wiegand experienced.

"I take a moment, I take a feeling and I take a catchphrase and I grow off of that," Rooster said.

From a young age, Rooster was exposed to music by his father, a jazz musician who identified on stage as "Chocolate Chuck." This exposure, along with his own exploration into gospel and hip-hop music, provided him with a broad musical perspective.

Wiegand says the goal of Cheese and The Wiz is to escape the bounds of any single genre. He tends to focus more on capturing feelings than adhering to the conventions of any certain genre.

"One of my goals for my music is for somebody to listen to it and ask you know, 'What genre is this?' I'm actually one of those people who, when people say 'What do you listen to?' it's literally everything," Wiegand said. "I range from banjo music, to country, to EDM, to death metal and so whenever I jump onto a track, I try to wipe all conceptions of that out."

Wiegand and Rooster both say they pursue music as a form of therapy. For Wiegand, music is helpful in regard to taking control of negative moments in life and putting them in the past.

"When you're in it, it's hard to have kind of that overarching view of it, you're kind of wrapped up in the emotions and this allowed me to kind of encapsulate those emotions and really, move past them," Wiegand said.

According to Rooster, the two have more albums coming up in the near future. The songs to be expected in these albums will have snippets of EDM, funk, hip hop and more, but as Wiegand explained, it's all about the feeling.

Chow: Grateful for the Grub

With a New Class Starting Tomorrow, Startup Tucson Wants To Teach Entrepreneurs How To Navigate COVID