Local libraries provide free meals to kids during the summer 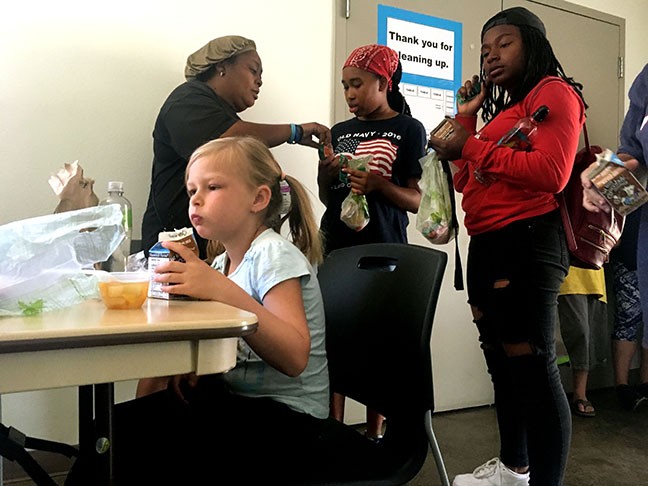 Tori Tom
A safe space and a decent meal

A signed collection of artwork is stowed within a hunter-green folder inside the left drawer of Rebecca Bommersbach's desk. Its contents are some of the Martha Cooper Library employee's most prized possessions. "They are my physical appreciation tokens," the technical assistant said, thumbing through each drawing. These tokens of gratitude are pictures crafted by some of the youngsters Bommersbach has worked with over the years, dating back to 2011.

Old-timer library employees like herself foster mentoring relationships with the children they service regularly, spotting circumstantial particulars that other people may not, including food insecurity.

Martha Cooper partnered with Tucson Unified School District for a summertime pilot lunch program, which began Tuesday, May 29, geared towards keeping kids' tummies full, after Bommersbach and her colleges noticed that kids in the library seemed hungry in the afternoon.

"That is a very high population of free and reduced kids," said Amy Ruhl, manager of TUSD's food services, about local families. Many parents can't afford childcare costs for the summer, and they often work multiple jobs to make ends meet. So they send their kids, age 8 and older, to the Martha Cooper library on weekdays because it's safe and free. Before this program, those youngsters, who depend on free and reduced-priced lunches during the school year, were no longer guaranteed meals once summer break begins.

Statewide, 57 percent of kids from kindergarten to grade 12 qualified for free or reduced lunches at public schools this past academic year, according to data from the Arizona Department of Education's Superintendent of Public Instruction office.

"I think it's a good program to have for kids who don't have easy access to food, especially health foods," said Janel Latif, who attends activities at public libraries a few times a week with her children, Simon, 9, and Loral, 4, at different sites.

Sitting on the ground outside, Latif's daughter was one of the 42 children on Tuesday who munched on the sack lunch TUSD handed out. The district prepares the lunches in accordance with U.S. Department of Agriculture's My Plate recommendations to ensure proper nutrition for Martha Cooper's smallest patrons.

Select Pima County libraries are also providing breakfast during these hot months in conjunction with the Community Food Bank of Southern Arizona. The breakfast and lunch programs are expansions from a snack program that started at Santa Rosa Library in 2013. It's been successful ever since and continues each academic year.

The state's food insecurity rate was almost 15 percent in 2016, according to the hunger relief organization Feeding America. Of the 141,120 residents in Pima County who experienced food insecurity two years ago, 48,550 were children.

When Caitlyn Burns, now a children's service manager at Joel D. Valadez Library, heard kids ask the front desk for food, she knew she had to do something. Her empathy for the children spurred her to start a grandparent snack program that gave rise to Martha Cooper's pilot program. As a kid, Burns was raised in a working-class family from the Flowing Wells District and "remembers what it was like to not grow up with a whole lot," she said.

"I've seen this divide between the haves and have-nots," Burns said. "Libraries are in the business of leveling out the playing field for everyone... Serving food to kids who are hungry helps them learn and retain new information."

Bommersbach and Burns say county library meal programs are a mini fragment of what should be done to combat childhood hunger and equip their patrons with the brain food they need to thrive. "They're not able to reach their full potential when hungry," Burns said. "This is a way we can help them reach that, a way that kids can get their very basic fundamental need met."

The fruit of library staffs' kindness extends beyond the basic interactions that are required of their job titles. "The connections I've made with these kids are very, very meaningful," Bommersbach said. "I never expected to get so attached to them."

Summer meals at Martha Cooper are handed out every weekday at 1 to 2 p.m. from May 29 to July 19.

Tori Tom is a Tucson Weekly intern and University of Arizona journalism student.