Kristen Wiig pulls off a comic miracle in her delightful 'Bridesmaids'

Kristen Wiig delivers the best performance of the year so far by an actress in the raucously hilarious Bridesmaids.

Wiig, who co-wrote the screenplay with Annie Mumolo, has flirted with movie greatness before, but Bridesmaids is her first chance to headline, and she kills it.

We are introduced to Wiig's character, Annie, in an awkward sex scene shared with Jon Hamm, playing her awful, insensitive screw buddy. The moment gives Wiig a nice opportunity to get the laughter rolling with some prize-winning sex faces.

When Annie gets picked by her best friend, Lillian (Maya Rudolph), to be the maid of honor at her wedding, it comes at a really bad time: Annie has just lost all of her money on a failed bakery; her love life is in shambles; and her roommates are creepy British people.

She gives the gig her best shot, only to be consistently upstaged by prissy Helen (Rose Byrne), Lillian's rich new friend who is vying for the top bridal-party job. Other members of the party include sweet and innocent Becca (Ellie Kemper), slutty-housewife and angry-mom Rita (Wendi McLendon-Covey) and the slightly frightening but somehow likable Megan (Melissa McCarthy).

McCarthy, who turned in an excellent performance in The Nines, puts on a completely different face for this movie, and it leads to epic comic greatness. There isn't a moment when McCarthy is speaking that isn't funny. Whether she's using a sink as a toilet, biting Annie's ass during a wrestling match or stealing puppies, McCarthy's Megan will stand as one of the year's greater comic highlights.

Wiig and director Paul Feig find a nice balance between effective, sweet drama and all-out raunchiness; there are a few scenes here that earn instant recognition in the Gross-Out Hall of Fame.

Wiig has taken a lot of shit lately for her work on Saturday Night Live. Actually, she's the one of the cast members working the hardest, throwing a bunch of comedic stuff at the refrigerator to see what will stick. Sure, she has produced some clunkers, but she's also produced a healthy amount of humorous successes. (I love the big-forehead girl on The Lawrence Welk Show and, yes, the Target Lady.)

In Bridesmaids, she delivers the kind of comic performance Steve Martin used to deliver at the height of his career. She puts forth fiercely funny stuff with heart and a brain—and she's willing to get super-dirty if the moment calls for it.

Annie flirts with a goofy Irish cop (Chris O'Dowd), and the two have great chemistry; the moments they spend together onscreen are sometimes so charming that it hurts. O'Dowd is effortlessly funny and able to break your heart at a moment's notice.

The film has many golden comic sequences, but the best involves Annie's difficulty on an airplane after mixing some sort of tranquilizer with scotch. Other highlights include a food-poisoning sequence that involves Maya Rudolph taking a dump in the street. If anybody could make such a predicament look graceful and almost classy, that would be Maya Rudolph.

This film marks the last appearance of the great Jill Clayburgh, who died of cancer last year. She plays Annie's mom, and gets plenty of laughs. It's nice to see this great actress go out on a high note.

The movie is produced by Judd Apatow, who has been rolling gutterballs since 2008, when he produced Pineapple Express and Step Brothers. (I liked Funny People, but it was a box-office disappointment.) This one should jolt some life back into the Apatow comedy factory, and let's hope so: His future slate includes a Pee Wee Herman movie!

If you don't mind raunch with your laughs, get thee to Bridesmaids. Wiig's performance is some sort of comic miracle, and the movie she has written around it has got a big heart.

Bridesmaids is not showing in any theaters in the area. 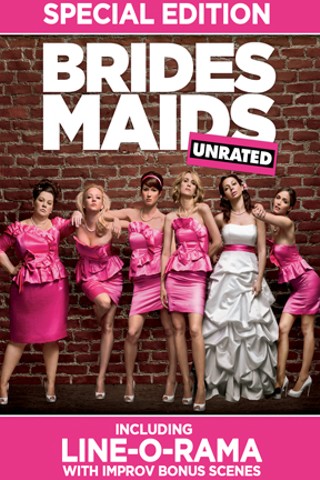