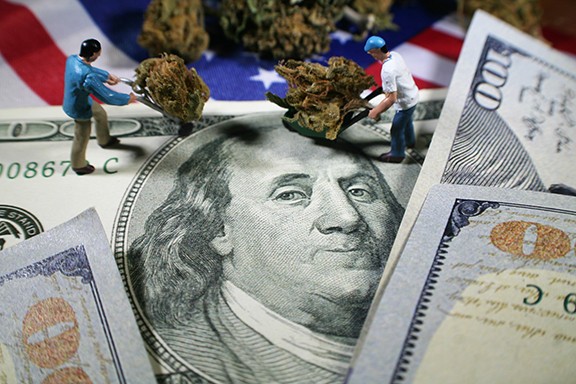 As the country wrestles in the throes of the debate on marijuana legalization, politicians and advocates alike have been professing the tax boon marijuana sales would likely generate.

Those 150,000 patients purchased a total of just over 43 tons last years. With an estimated price of $250 per ounce, and an average tax rate of 9 percent, those sales generated nearly $32 million for the state of Arizona, or about 10 percent of the state's K-12 spending. The Arizona Joint Legislative Budget Committee estimated a yearly revenue of $123 million when Prop 205 was on the ballot in late 2016. States across the country post first-year revenue numbers in the ballpark of $30 million to $40 million after legalization . California alone plans on bringing in $1 billion in marijuana tax revenue in the next year.

Aside from overstated impacts of increased policing and healthcare costs, which would quickly dissipate as marijuana becomes more integrated in our society, marijuana stands to be a major source of revenue for our country.

Rep. Ro Khanna (D-California) recently estimated national legalization could provide as much as $7 billion in yearly revenue for the U.S. However, that estimate seems conservative after looking at the proposed $132 billion in revenue according to marijuana analytics firm New Frontier Data.

Coupled with decreases in costs related to the war on drugs and incarcerating those with marijuana offenses, and the country stands to see a lot of cash free up by both saving money and increasing revenue. There's another upside in allowing the marijuana industry to grow into full bloom, per New Frontier Data's report. As a brand new industry, new marijuana businesses could employ millions of new workers, helping to fill in the gaps of structural unemployment.

It doesn't take much training to sling pot. Additionally, the revenue generated from income taxes by millions of new workers making tens of thousands of dollars a year wouldn't hurt the nation's budget, either.

One issue arises in legal marijuana states where politicians are concerned that steep taxes will only send people back to the black market.

Since marijuana tends to be an inelastic product for regular users, they could choose to return to cheaper sources.

On the other hand, that also means users would be more willing to pay a higher price for their substance of choice. Those who use less regularly may give it up all together, but it's unlikely new users would turn to an unknown black market for a new craze.

Then again, you don't see people texting their hookups for moonshine when the bar is selling $15 cocktails. In fact, it was prohibition that created alcohol's black market, however brief.

If history isn't our guide, then hopefully the balance sheets will be.

No matter on which side of the aisle members of Congress sit, we can all get behind the idea of bolstering the national budget.

If our representatives don't hear that, then we have issues beyond marijuana legalization.