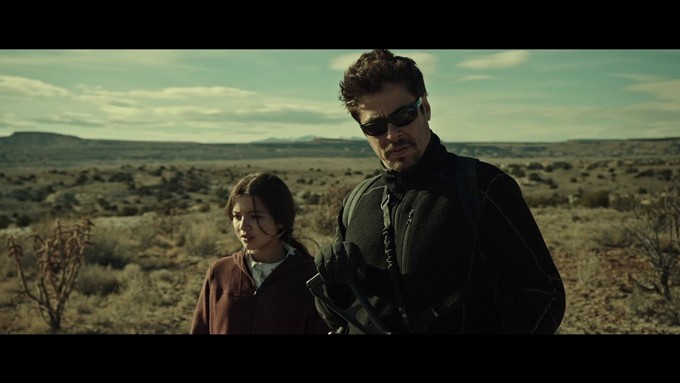 When Emily Blunt opted to make A Quiet Place, or the new Mary Poppins movie, or whatever it was that kept her from saying "Sure, why not?" to a Sicario sequel, that's where producers should've just said "Oh, well. Maybe later, when Blunt frees up?" After all, she was the main reason to watch the original.

Nope, they went for it anyway, and the result is Sicario: Day of the Soldado, an excuse to trot out Benicio Del Toro and Josh Brolin for a nasty film plotted in such a way as to assure it would give the likes of Sean Hannity a monster boner. A ginormous, Fox News red boner right there in the middle of the theater.

The timing of this movie is, shall we say, interesting. As real-life tensions build along the Mexican border, with families being separated and humanitarian water jugs being poured out, along comes a movie that shows ISIS terrorists crossing over the Mexican border and blowing up strip malls. Wait a minute, isn't Sicario supposed to be about America's beef with drug cartels? This ISIS stuff feels, well, tacked on.

While the terrorism element introduced near the beginning of the movie looks to be the driving force of the plot in the early going, it all but falls away in favor of a kidnapping subplot intended to start a war between the Mexican and U.S. governments. In fact, a character dismisses the terrorist element later in the movie by saying "Oh, they were from New Jersey," or something along those lines. It's as if screenwriter Taylor Sheridan started one movie, got scared, said screw it, and finished with another one. To say the movie lacks focus is an understatement.

Brolin returns as agent Matt Graver, a nasty guy who will blow up your brother as you watch on a laptop if you don't tell him what he needs to hear. Del Toro is also back as Alejandro, an operative once again hired by the U.S., this time to stir up trouble with the cartels and eventually kidnap Isabel (Isabela Moner), a drug kingpin's daughter.

Let me just take this moment to say Moner, who you might remember from her unfortunate participation in the latest Transformers movie, is a big star in the making. She gives the kind of performance that breaks your heart because it is something so good in service of something so mediocre. There are moments where she makes you forget you are basically watching a very unimportant movie.

Del Toro works hard to bring some gravitas to the proceedings, but this is basically a sadistic action thriller with little brains. There are some decent sequences put together by director Stefano Sollima, who replaces the excellent Denis Villeneuve from the original. While Villeneuve could provide real dramatic heft with the gunfights, Sollima gives us the shocks minus the depth. It's a hollow movie.

Catherine Keener shows up as Brolin's boss, required to make her man do things that only a truly despicable POTUS would put into play. It's hard to tell if the movie is an indictment of U.S. policies or a celebration, although the dude whooping and drooling in the front row makes me think it could be taken as the former. Matthew Modine is on hand as the Secretary of Defense, and plays it like a beefier meditation on his Stranger Things villain.