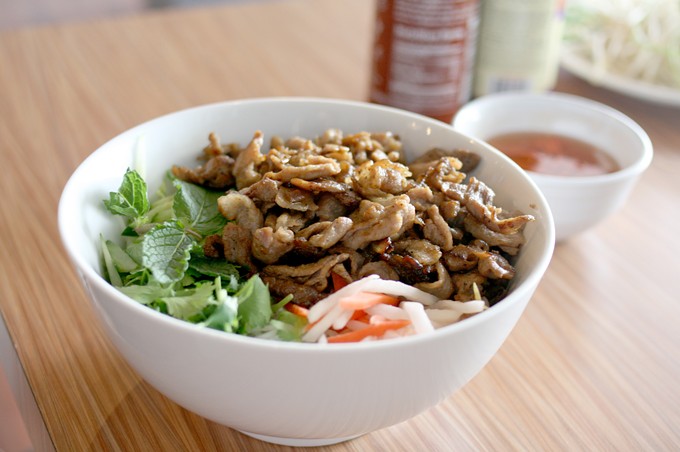 Heather Hoch
The bun cha at Cali Grill might be called "noodle dish" but it tastes like the real deal.

Cons: Food and service were both inconsistent

Some Vietnamese spots around town can be a little intimidating—especially if you're looking to introduce a friend to the cuisine for the first time. Menus in Vietnamese and modest, yet admittedly divey digs might scare some diners away.

Well, for the more timid diners looking to try something new, Cali Grill, located on Fort Lowell Road near Campbell Avenue, offers up a range of Vietnamese fare in bright, contemporary style. The restaurant uses simple white walls with bright orange accents, along with a bevy of plants, to set the tone of the concept: clean and fresh. That ideology isn't hidden either with quotes scrawled on the walls promoting healthy eating.

"Let food be thy medicine and medicine be thy food," says one wall in Cali Grill.

"Food is an important part of a balanced diet," says another and yet another quotes Oscar Wilde.

The menu itself admittedly has some red flags. First off, all of the bun, pho and banh mi dishes are on the back of the menu, which seemingly implies that they're of lesser import, leaving the front page for appetizers and entrees. Dishes are listed only as Americanized names like "noodle dish" and "noodle soup," which is good if you're unfamiliar with those dishes, but it certainly wouldn't detract if it said both pho and noodle soup.

Finally, there are the pictures. My dining buddy wondered if they were actually representative of the dishes themselves or just culled from Pinterest. While some dishes matched their advertised appearance, others just didn't—leading to some disappointment when they made their way to the table.

Starting off, the menu offers calamari and wings, along with wraps, to start. On the menu, the calamari looked to be shoestring-thin pieces of curly squid battered and fried to a golden brown. At the table, that calamari was uniform thick circles coated in a light crust. Served with sweet chili sauce, the flavor of the calamari itself needed a little help as it seemed only moderately fresh.

Luckily, the wraps were a completely different story. While the menu wasn't exactly clear on what the wraps were (I expected rice wrapped spring rolls), once served, it turned out the dish was a build-it-yourself lettuce wrap. With your option of either grilled chicken or shrimp, you pile your meat, rice noodles, pickled veggies, herbs and more onto the lettuce leaf and douse it in fish sauce and peanut sauce. The chicken was nicely cooked with some blackened pieces and a delicate marinade for just a little hint of flavor. Plus, at just $4.99, these could be a nice, light and crazy cheap lunch option for folks on a budget.

Much to my surprise, one of the top reasons to go to Cali Grill is actually the drinks on the "Tea Zone" menu. Sweet and buttery taro smoothies, lychee slushes, creamy avocado smoothies and more make the drink menu a must-try. The sea salt cream that accompanies either sweetened coffee or green tea is a delightful savory touch that balances out those drinks. If you're looking for booze, though, Cali Grill is not currently serving beer, wine or liquor.

Really, though, the best part about Cali Grill is the pricing, which is cheap even when compared to other Vietnamese spots in town. Entrees run around the $10 range, depending on what you get, and the bun and pho dishes—which are a couple meals on their own—are either $7.50 or $7.99. The banh mi are under $5 and come in pork, chicken and tofu.

The entrees or "rice dishes" feature a range of grilled meats, like chicken, tilapia, salmon and pork, as well as a curry. The grilled pork was pictured as pork belly and old incarnations of the Cali Grill menu even say "Caramelized Pork Belly." However, this dish is actually the same marinated, grilled chopped pork that comes on the bun dish. It's not that it's bad—just not exactly what you're hoping to see when you have visions of pork belly in your head before.

The grilled pork is much better served atop rice noodles, herbs, lettuce, pickled veggies and more as a noodle dish or bun, where its subtle flavor is enhanced by the surrounding components, rather than smothered out and neutralized by a pile of rice.

Even the pho wasn't immune to these issues. The house pho, served with beef tripe, had a very delicately flavored broth that was up front with all of those pho flavors you look for in a broth. Conversely, the spicy rustic pho had an oily red broth that relied on the heat to take over the flavor. Unfortunately, that spiciness was fairly mild so the soup was nearly flavorless. The beef and noodles were both overcooked, creating a relatively unpleasant texture overall that matched the dull broth.

Like the food, the service wasn't always on point. On the first visit, I had to ask for silverware, and, on the second, water. Although the servers were friendly, those small errors built up over the course of my visits.

What Cali Grill excels at is clean and basic foods—an understated broth or a lightly spiced marinade. The more simple and straightforward dishes are confident in their composition and don't attempt to muddy the flavor. The others tend to complicate things, losing direction and resulting in bland eats.

The best analogy I can think of here is painting with a bunch of colors: you can use each color individually to highlight and balance or you can mix them all together and get a weird brownish mess. If you pick the right thing at Cali Grill, which seems to be the more basic options, you'll end up with one of those bright pieces.