With a passion for beer and baking, Emily Peterson combines the two in the sweetest way possible 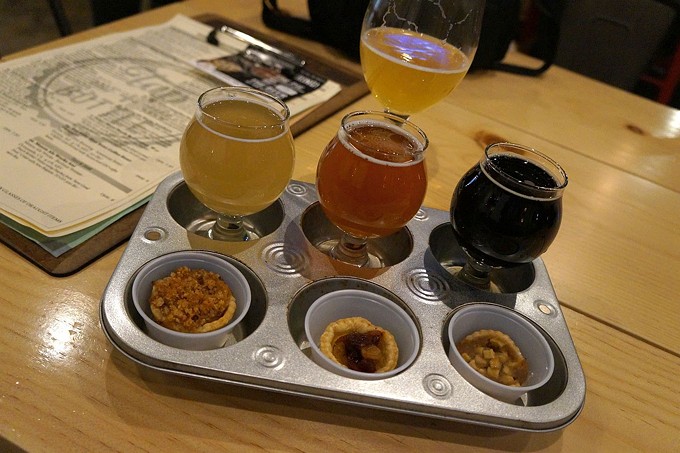 The wine does go well with the sweets.

It's a random Thursday at the Northside Tap and Bottle, but the place is packed. The lucky patrons here tonight are in for a sweet, and sometimes malty, treat. Emily Peterson, the one-woman power proprietor of the Beer Geek Bakery, is hosting a pairing of some of her mini pies and tarts with pre-selected beers. Now, this isn't just a random coupling of some IPA with a sugary confection, oh no. What Peterson does is pretty unique and special.

From ingredients that go into a specific beer, such as fruit, yeast and barley, Peterson utilizes those components to create fantastic "beer kissed" nibbles of sheer delight, harmonizing rather perfectly with the ale or lager used for the baked good. Customers sip the brew then take a bite and the looks on their faces can only mean a combination of curiosity and wonder. Drinking cake and eating beer is quite a novelty for most palates.

"When I first started baking, I knew nothing; like I couldn't even make whipped cream," says Peterson, laughing as she talks about getting her start at Hacienda del Sol almost a decade ago. "I literally learned how to bake from scratch. After moving around kitchens for a bit, I found myself as the pastry chef for Proper. It was there that I came up with the idea for Beer Geek Bakery."

Peterson moved to Tucson 12 years ago from Texas and is now the pastry chef at Miraval but does Beer Geek in her rare spare time. She started her business in early 2016, experimenting with recipes until she finally began to get the taste and consistency down right. Essentially the process involves rendering the beer down until it becomes an extract or syrup, unless she is using direct ingredients, and from there she can begin the process of turning the beer into an edible delicacy.

"It's not easy, but it is so worth it," Peterson says. "I like the beer to tell me what it wants to do. Sometimes it works, sometimes it doesn't. When it does the results are freakin' amazing."

In June 2016, Peterson had her first pairing at Iron John's Brewery. The event was so popular that a second one with Pueblo Vida happened soon after. But it wasn't until her third with the downtown Tap and Bottle that she knew she was on to something good.

"I sold out in about 45 minutes," Peterson says. "Now Beer Geek Bakery is like...a thing."

Here is how she makes it work:

When a brewery hits her up and wants to do a taste flight, Peterson meets with them to go over what beers they have in mind. From there, she observes what goes into the beer, such as serrano peppers, honey, herbs and spices, then collaborates with a recipe that would go well with, say, a sour ale or stout, and works her kitchen magic until a bite-sized pastry is born from the worty stew that goes into making a locally produced frothy brew.

Recently she has made Thanksgiving cakes and pies using beer from Ten 55 Brewery, hatch chili pretzel brownies from Green Feet, red ale crinkle cookies and German lager Rice Krispie treats, courtesy of Button Brew House, and spooky Halloween nibbles from grains and seeds at Crooked Tooth. The list keeps going and going and the best part is that Peterson and Beer Geek Bakery are just getting started.

And it's not just beer now that Peterson bakes with. The good folk over at Hamilton Distillery offered her 10 pounds of mesquite-smoked malt, which she then turned into a cocoa mix. When you're in the neighborhood, the Tucson Hop Shop always has some of her wares, so when you are relaxing on the back patio enjoying a seasonal Saison, you can snack on one of her green chili or porter-infused brownies.

And going back to Ten 55: It's not official yet, but when they open their new spot down on Congress Street, word has it that they will be selling Beer Geek goodies alongside their meaty and malted menu. Right now, Peterson is content baking out of her small kitchen (which she wouldn't let me visit, stating that it is always in a "constant state of pure destruction"), but she might be opening her own brick-and-mortar Beer Geek Bakery equipped with taps and treats, a permanent location where you can quaff and nibble from flights of absolute fancy pants from the self-proclaimed "sugar hooker."

"Every brewery does something so different from the others, so my recipes are always changing," Peterson says. "And I love that more breweries are moving in to Tucson. Bring it on! I mean we all love beer, right? We all love cupcakes. So why not put the two together?" ■