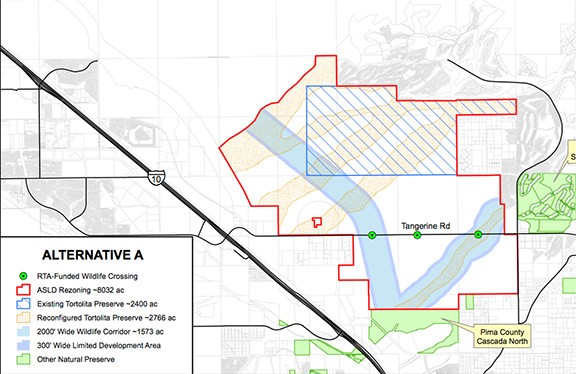 This rectangular parcel, known as the Tortolita Preserve, is home to a variety of desert flora and fauna, notably the cactus ferruginous pygmy-owl, lesser long-nosed bat and many ironwood trees and saguaro cacti. Located directly southwest of the Ritz Carlton resort and Dove Mountain residential community, the area is also a popular hiking destination.

Marana's lease on the preserve expires in 2099, and payments are set to increase every five years by 10 percent or the Consumer Price Index, whichever is higher. The town's 2019 lease payment is nearly $575,000. By the end of the lease, staff estimate the cost to rise over $2.6 million.

To find a viable financial solution for this increasing cost, Marana is discussing the possibility for State Land to auction the parcel and let the town establish it as a permanent preserve. Negotiations with State Land have been ongoing since 2011.

During a council study session last Tuesday, Oct. 8, Marana Town Attorney Frank Cassidy said State Land will only move forward with an auction if the town rezones about 8,000 acres of state-owned land surrounding and including the Tortolita Preserve.

Approximately 2,766 of those acres, including portions that border Dove Mountain, will be zoned for open space. Most of that acreage is based on washes and natural drainage for rainwater coming off the Tortolita Fan.

Before the rezoning process begins, State Land wants Marana to sign an agreement to focus the rezoning process on those 8,000 acres, grant State Land zoning entitlements on the property that will be shared only after the agreement is signed, waive the town's zoning and application and review fees, and the minimum bid for the auction will be set at the fair market value or the net present value of the lease, whichever is higher.

Revenue made from State Trust land goes primarily toward funding K-12 education in Arizona. By auctioning the preserve, State Land would be able to recoup the revenue that will be lost by canceling Marana's lease.

However, Cassidy noted that revenue from the sale of land must go into their investment pool and be spent on capital improvements, while leased land revenue can go toward maintenance and operations.

"The State Land Department, especially its current commissioner, wants to be known as somebody who runs the department like a business," Cassidy said. "If you're a business person and somebody was asking you for something like this, sell the preserve, you would ask yourself what it is that we can get that's of benefit to us."

Mayor Ed Honea said this deal, as it stands now, is a big win for the state and a big loss for Marana.

"What happened is we started out trying to figure out a way to buy this state land outright, and it morphed into rezoning 8,000 acres of Arizona state land," Honea said. "The state kind of held that over our head."

State Land will eventually sell the land around the reconfigured preserve, including about 60 percent of the existing mitigation land, for whatever they can make from developers.

The Town of Marana is required to trade the current rectangular preserve for the reconfigured preserve, and will have to provide mitigation land to developers, but will not be allowed to collect any revenue from that.

"The state wants us to have 2,700 acres of mitigation land, and none of it usable," Honea said. "It's all in the bottom of a wash, it's in a drainage area, it's not land that has any value. For that, we will give them the other mitigation land back, or about 60 percent of it, which meets the criteria for building homes and things of that nature. We're trading some pretty good land for some really non-usable land."

Carolyn Campbell, executive director of the Coalition for Sonoran Desert Protection, also has issues with the reconfigured preserve, but for different reasons.

She told the council last Tuesday she supports the effort to purchase the land and believes the larger rezoning process is the best way to protect the Tortolita Preserve in perpetuity. However, she and the coalition believe the current reconfigured preserve does not meet ecological and biological goals because it does not connect with other preserved lands, core habitats or constructed wildlife crossings.

"The proposal seems to be based on drainage needs rather than wildlife habitat protection and connectivity," she wrote in an Oct. 8 letter to the council. "I do want to stress that the acreage is not necessarily the most important thing but rather the functionality of the lands."

Campbell noted the Regional Transportation Authority has already approved funding for three wildlife crossings along Tangerine Road in anticipation of the eventual development along the Tangerine Corridor. Not all of the crossings line up with the proposed reconfiguration.

She argues that taxpayer money is being used to create these crossings, so the town should do what they can to make them effective and usable to wildlife.

In the end, the other council members agreed with Honea that the conditions of the agreement are unfavorable to the town. They encouraged Cassidy and other staff to continue negotiations with State Land, to resolve the issues they found with the purchase and their inability to recoup costs on mitigation land.

The council could also choose to stick with their current lease and continue to make annual payments.

"I'm going to need to see the finances because if we're going to end up paying more but getting less, I don't know if I'm for that either," said council member Roxanne Ziegler.

Staff estimated that if the town were to buy the preserve at auction, it would cost between $17 to $18 million. Honea said the debt service for that will be about $1 million per year, which is roughly double what the town pays right now for the lease.

"We started out with a good deal ... but I think the parameters the state has put on this land are not acceptable," Honea said.

"Our taxpayers should not foot the bill for mitigation land for the state to sell land and make big money, for education or not."