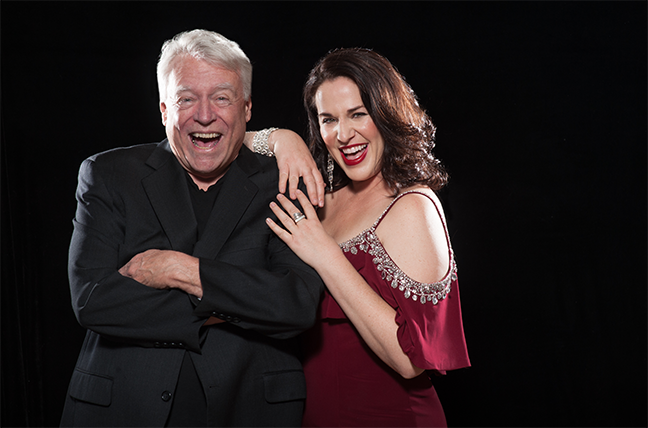 Let's see. You have your bacon.

Your multitude of grilled meats. And, oh, those eggs, splatting and sputtering on your car hood. There are mighty sizzles in these sounds as triple-digit temperatures dance like demons.

However, the best sizzling sounds are the music and voices—and laughter and applause—brought to us by the Invisible Theatre in their summer cabaret-styled series called, appropriately enough, Sizzling Summer Sounds. And it's happening right now.

Every summer for a couple of weeks, the theater gathers impressive musical talent from these parts and beyond, and what results is cool, top-class entertainment indoors while the sun blasts outside.

The series has been sort of a moveable feast. Venues have included the Doubletree, the Arizona Inn and the Skyline Country Club. Oh, and literal feasting has always been offered as part of the experience, with dining as part of the deal, either with discounts offered in the venues' dining rooms or dinner included in the price of admission.

This year the fun has again taken to a new space, the Carriage House downtown, and your evening's entertainment can be complimented with world-class chef Janos Wilder's extraordinary good eats.

Susan Claassen, Invisible Theatre's intrepid leader for decades, says that the series has been a summer sensation for about 30 years. The move to the Carriage House has a special meaning for her. The Odd Fellows Hall, home to Janos' Downtown Kitchen + Cocktails and the Carriage House, was the first home of the fledgling Invisible Theatre in the mid-'70s. Although she says they could never get the building in good enough shape to house a theater, in a way if feels like coming full circle.

Wilder also feels like this venture is a return to his downtown roots, where a short distance away he opened his first Tucson restaurant on the grounds of the Tucson Museum of Art.

"Susan and I are old friends," he says, and he is elated to partner in this joint venture. "We have used the Carriage House for several things, but for this to be happening in the summer (an off season) is a gift. They have transformed the space. It's just beautiful."

So what's on the bill this summer? There are numerous talents from our own fair city, like Katherine Byrnes, Jeff Haskell, Rob Boone, Christina Vivona, and Armen Dirtadian, among others. Then there are some familiar folks who have been here before, either as part of this series or for other events. The list of shows this summer includes 11 performances showcasing 14 impressive artists, some working solo, others as an ensemble.

Ann Hampton Callaway has been a frequent visitor to Tucson, for the cabaret series and for other events as well. When I reached her by phone, she told me she was in the parking lot of the Office Max buying moving supplies. Oh? "Yes, I am moving to Tucson, Arizona, next month."

I think I may have screeched a bit.

"My better half (Kari Strand) is from Tucson and we have been living the New York life and it's time to turn the tables and be on her turf. We just found a historic Joesler and they accepted our offer and we move next month." She suggested this article would deliver some breaking news for a number of Tucson folks that "might get a kick out of it." So, remember, you heard it here first. (Space won't allow me to share the amazing story of how she and Kari landed the house, but I'm sure she'd be willing to share it if you ask.)

Callaway says her first Tucson visit was for a jazz festival, and "I fell in love with the mountains, the skies, the sunsets, the stars and the people and the sort of spiritual energy and the funky artistic side of it all.... It seemed time for a change, especially one that would plant us in a place more tranquil and would offer a great environment for a songwriter. It's a very life-affirming moment."

Besides, Callaway says Claassen has made her "an honorary daughter of Tucson," and that has allowed Callaway to build "a beautiful fan base. Audiences here seem to appreciate what I do, my sense of humor, my musicality, what I put into my shows and my songs, and they keep coming back. They're delightful and fun and responsive. Oh, and you should mention [who's writing this article anyway?] that one of the finest living composers of theater and pop music, John Bucchino, has just moved to Tucson. We're both so delighted to have made this move."

Callaway's show here will have three performances and will feature songs from her CD, Jazz Goes to the Movies, to be released in September.

Steve Ross has been an entertainer for "a lot of years." He's performed in Tucson numerous times, and he returns July 14 and 15 for two shows of An American in Paris, in honor of Bastille Day. The New York Times has dubbed him "The Crown Prince of New York Cabaret," and the London Times says his is the "smoothest cabaret act in the world."

Ross says he grew up in the 1940s listening to the radio and to his mother playing the piano. She played popular tunes by ear and he followed suit, but he wasn't a singer. "I sort of eased into singing."

In New York he discovered cabaret greats Bobby Short and Mabel Mercer. But, he says the term "cabaret"—where folks come specifically to hear you and "not to drink in a bar"— really didn't take hold until the 1980s. And "I was lucky enough to get my own cabaret room at the Algonquin Hotel.

"I love the attentive small audience," he says.

Initially his shows focused on what's known as the Great American Songbook—songs of the Gershwins, Cole Porter and the like—but Ross expanded his repertoire through the years.

Claassen first invited him to Tucson, "oh, maybe 20 years ago and we have gotten on very well. I even engaged her to direct one of my shows, I Won't Dance! It features the music of Fred Astaire. It was probably the most glamorous thing I ever did. It premiered at the cabaret space Rainbow and Stars next to the Rainbow Room. Claassen is so good to work with because of her marvelous positive energy."

Ross still performs in New York and takes his act on the road, but something new has him quite excited. He has begun teaching master classes. "I realized that there was more in my mind and in my fingers than I even knew. I call the classes The Song in You and You in the Song, because singers need to examine lyrics and find what the lyric might mean to them and how they might put themselves into the lyric. It personalizes the song, and that is the task of the cabaret performer. The song needs to mean something."

Who would disagree with that? And with the SSS series, these songs and artists also mean refreshing and excellent entertainment.