How can you tell if your gem show purchase is legit?

We are standing in a tiny motel room with six other people. What appear at first glance to be ancient Native American artifacts are packed into protective cases and strewn haphazardly across the room; the bed, the dresser, the bedside table and even an extra card table have been stacked high with black faux-leather cases. Geoff, a doctoral candidate in archaeology at the University of Arizona whose name has been changed to protect his identity, reaches for one such display—a small black box about the size of an iPad with four very old-looking arrowheads inside, visible through the glass pane on the box's front.

The business owner who is renting the motel room for the duration of the Tucson Gem, Mineral & Fossil Showcase gives Geoff permission to look at the arrowheads up close, so he opens the case and meticulously examines each specimen. To the untrained eye, each of the four arrowheads looks sufficiently weathered to suggest a few thousand years of age. Good enough to justify the $350 asking price per point except for one minor detail: outside of the room and out of earshot from any of the vendors, Geoff tells me that one of the four points in the case was most likely a fake.

"If you feel a ridge (on a stone tool) that feels deep enough to get your thumbnail underneath and almost pop it right off, that's a pretty good sign (that you're dealing with a replica)," Geoff says. "If you think about it, if these things have been underground or underwater for thousands of years, then the natural processes of erosion would most likely smooth those sharp ridges out over time.

Andrew Higgins, a curatorial specialist at the Arizona State Museum and the son of local Native American art dealer Michael Higgins, has been around ancient relics for most of his life. He, too, knows what to look for when trying to spot a fake. When asked about the proportion of genuine-to-misrepresented Native American artifacts at Tucson's annual exposition, Higgins reluctantly admits that he's seen more forgeries than actual artifacts.

Higgins says some common ploys used by disingenuous retailers include labeling items as older than they are (for example, selling a string of beads from the 1990s as a piece from the early 1900s) and mislabeling the origins of items. Higgins says that many woven baskets that feature traditional Native American images, such as the "Man in the Maze" pictograph often associated with the Tohono O'odham, are mass-produced in Pakistan. Other pieces may be deliberately aged by sanding or through the application of oils or dirt. Though the vast majority of retailers are open about the origins of their replica artifacts, others are quick to jump at the opportunity to make an extra buck. When purchasing a specialty item from a dealer, Geoff says, it's a good idea to stick to the dealer's specialty. Vendors who sell mostly fossils, for instance, may not have the skills necessary to authenticate arrowheads they picked up at last year's show.

Even if an artifact can be verified as legitimate, Geoff cautions buyers to make the extra effort to ensure that their purchases are ethical. He says that large, fragile pieces like whole clay pots, oversized stone knives and shell gorgets (decorative chest pieces that most likely signified tribal rank or social status) of exceptional quality have more often than not been recovered illegally from burial sites. He says that the laws that govern the extraction of artifacts from burial sites are extremely difficult to enforce, meaning that most violators go unpunished. Fossils, too, are subject to some degree of counterfeiting. Resin-cast trilobite models from Morocco have been passed off as the real deal by nefarious merchants.

When dealing with gemstones and jewelry, local business owner and jeweler Michael Barrett suggests that you make sure you are dealing with a reputable seller. When looking at silver or gold jewelry, he says, look for hallmarks embossed on the piece itself, usually near the clasp.

And don't be afraid to ask questions—a point echoed by Mark Candee, assistant curator of the UA Mineral Museum. "Ask if (a stone) has been enhanced, where it was collected ... and if they can't answer, go on to the next tent," he says. Barrett and Candee, along with the other experts questioned for this article, suggest that people serious about buying collectible or valuable items at the show consult outside experts and do some research on the types of products that interest them.

As for minerals, gemstones and precious metals, most of the people we spoke with said that issues arising from gem show purchases are rare. Gloria Quigg is one of the volunteers at the Tucson Gem and Mineral Society, the nonprofit responsible for the main show at the TCC, which celebrates its 60th anniversary this year. She says that the society "has a careful and competitive selection criteria" and that the main show has developed a reputation as the best place in the world to buy and sell gems and minerals by keeping standards high. "We've built up our reputation for having quality merchandise ... and we work very, very hard to maintain that," Quigg says. It speaks to the show's credibility that the Smithsonian Institution is comfortable loaning the society a multimillion-dollar diamond tiara for the show, which also will feature pieces of jewelry recovered from ground zero in New York City.

Candee also directs wary and amateur collectors to the society's show at the TCC, saying that vendors have "got to be pretty well-qualified" to get in there. Each of the more than 40 satellite shows around town, though, has its own promoter and therefore its own vendor selection process, according to Quigg, who notes that the quality offered by dealers can vary from show to show.

Ultimately, nothing can replace education and experience when it comes to verifying the authenticity of any collectible, though guidance from local professionals and reliance on reputable dealers is a close second. If you are one of the upward of 50,000 people looking to make a purchase from any of the more than 6,000 vendors at this year's gem shows, know what you're looking for before you go. "You've just gotta be careful," Geoff says. 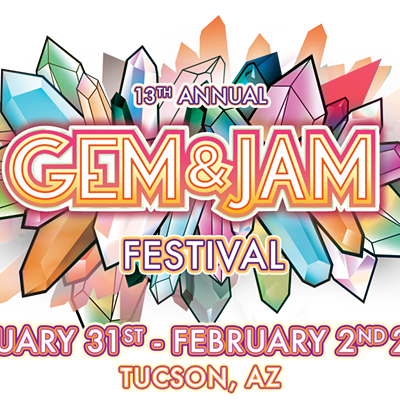