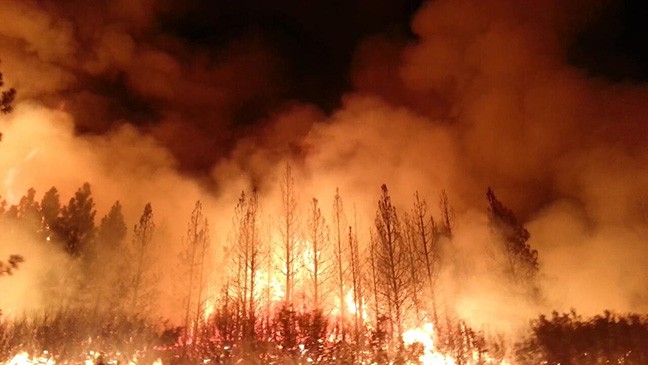 The report is an expansive document, involving collaboration from federal to local governments, indigenous communities, laboratories, universities and the private sector. The report overview unambiguously states "Earth's climate is now changing faster than at any point in the history of modern civilization, primarily as a result of human activities." While still focusing on weather and climate data, this fourth National Climate Assessment goes beyond the traditional examination of warming temperatures.

Among the assessment's more than 300 authors are six University of Arizona researchers.

"What this NCA has done well is moving us into the more challenging and complex effects of climate change," says Heidi Brown, report co-author and UA assistant professor of epidemiology and biostatistics. "It's telling us, 'This is what you need to examine' ... We've moved beyond just heat, and are now looking at how these changes mix together for different effects."

The Southwest chapter of the report examines temperature and wildfire increases across the region, as well as the perennial battle over water. Water in the region is a source of contention both for humans and nature alike: drought poses a risk for the agriculture and food industries, and also leads to tree die-off and wildfires.

"If we think about the climate projection we have, the one thing we know with the most confidence is warming," says David Breshears, report co-author and Regents Professor in the UA School of Natural Resources and Environment. "There's an awful lot of forest at risk because of temperature and we're awfully confident it will happen. But the good thing is we also know any reduction we can make in our emissions can reduce these die-offs."

The report also examines the biological complications that arise from increased heat. Not only can heat waves cause illness and death, but increased air temperature can spread disease through the Southwest.

"Based on lab experiments, when you put mosquitoes in an incubator and increase the temperature, you see faster development," Brown says. "But while the general understanding is warming means more mosquitoes, and possibly more infectious mosquitoes, it's far more complex than that."

The report states that heat extremes and changes in precipitation influence the distribution and occurrence of diseases like West Nile virus. More arid winds as a result of increased temperature and decreased rainfall can also spread disease and air pollution, a phenomenon the report says the Southwest is particularly susceptible to.

"Climate change has these really diverse effects, and as it gets warmer and warmer, we're going to see them more," Breshears says.

However, the report also points out real-world successes in water conservation, such as California reducing water use 25 percent from 2014 to 2017, in response to drought.

"The NCA is really good at not letting you put whatever you believe, but making sure it's backed up by science." Brown says.

Although the report also states "impacts of global climate change are already being felt in the United States and are projected to intensify in the future," the climate assessment does not explicitly offer any policy changes.

"An assessment is not a set of recommendations," says Gregg Garfin, associate professor in the UA School of Natural Resources and Environment, and lead author on the Southwest chapter of the report. "An assessment is kind of a backwards look. There was not original research done. What comes out of this report is through the synthesis and combination of information."

The NCA, required by the federal government, sends a report on climate science to the White House and Senate every four years. There are many mandates as part of the NCA, one of which is to not explicitly offer policy changes.

"Part of the mandate is it is not to be policy prescriptive," Breshears says. "But there are a lot of logical steps and inferences you can make."

But the report does state: "While mitigation and adaptation efforts have expanded substantially in the last four years, they do not yet approach the scale considered necessary to avoid substantial damages to the economy, environment, and human health over the coming decades."

However, some researchers on this new NCA don't necessarily see the lack of an overt call-to-action as negative or limiting.

"As a scientist, probably the best role I can play is to provide information and expert knowledge that can be used to inform policy." Garfin says. "I'm not an elected official or decision-maker, so I don't work under the same pressures or circumstances as they do."

President Donald Trump dismissed the efforts of hundreds of scientists compiling decades of evidence for the report.

"I don't believe it," Trump told the press last week.