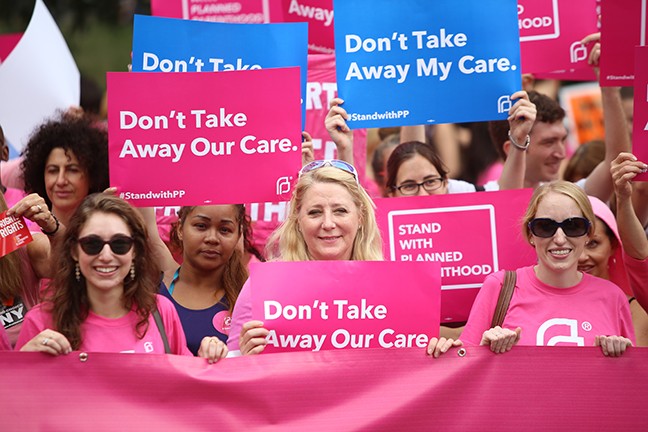 Given that Arizona has been championed as the No. 1 pro-life state in the nation for the last two years, it's a bit of a surprise that the state's conservative lawmakers didn't follow the examples of Louisiana, Georgia, Ohio, Kentucky and Mississippi and pass more restrictive laws.

Many Republican lawmakers definitely oppose abortion. As Republican State Rep. Mark Finchem, who represents Oro Valley and Pinal County, told the Weekly: "I am a pro-child person, I believe that we are facing probably an as important civil rights case as slavery was in the 1800s. We're talking about the taking of life, and yeah there's all kinds of justification that's presented by scientific folks, but I've talked to just as many doctors who've said, 'This is a living being.'"

The lack of anti-abortion bills could be traced back to the current partisan balance at the Arizona Legislature.

"I think the only reason we didn't (pass abortion bans) was that we're so close on the count, with 29-31 in the House and 13-17 in the Senate," said state Rep. Pamela Powers Hannley, a Democrat who represents central Tucson and the Catalina Foothills. "So you have a few reasonable Republicans here and there. They get bullied if they stand up against their leadership, but a few of them have shown to do that."

Even so, Arizona has seen a number of new laws over the last decade that have made it harder for individuals to access abortions.

When Supreme Court justices decided Roe v. Wade in 1973, they specified that states can regulate abortion care as long as it doesn't place an "undue burden" on the patient seeking it. Tayler Tucker with Planned Parenthood says conservative lawmakers try to stretch that interpretation through the use of what pro-choice activists have come to call Targeted Regulation of Abortion Providers, aka TRAP laws.

"We're seeing more and more of these backwards or small ways of chipping away at abortion care here because the major forms of legislation have already been passed," Tucker said.

In April, Planned Parenthood Arizona filed a federal lawsuit arguing that three TRAP laws in the state are unconstitutional. These include a ban on abortion-related care via telemedicine where a patient consults with a nurse remotely, a mandatory 24-hour waiting period between the time a patient requests an abortion in person at a clinic and when they can receive that abortion, and a physician-only requirement that bars nurse practitioners from performing a surgical abortion or administering a medical abortion pill.

These laws have particularly impacted the ability for residents of rural communities to access abortion care. Planned Parenthood used to operate smaller satellite facilities in Casa Grande, Prescott and Yuma but closed down following the economic downturn of 2008 and the new restrictions.

Now, the only place in Southern Arizona that provides abortions is a single Planned Parenthood clinic in Tucson. There is also a small network of clinics in the Phoenix area. As a result, residents of rural Arizona are forced to drive hundreds of miles in order to access abortion care. Throw in the 24-hour waiting period, and rural patients are forced to arrange for adequate transportation, time off work and possibly child care.

Across the United States, more than 400 TRAP laws have been passed since 2011.

The Center for Arizona Policy, a lobbying nonprofit that largely influences the passage of anti-abortion legislation in the state, has a running list of all the TRAP bills that have been passed with their support. The list identifies 34 laws between 1996 and 2018. It also details nine laws that promote alternatives to abortion.

• HB 2036 was a 20-week ban on abortion passed by Arizona legislators in 2012. It is currently not enforced because the Ninth Circuit Court ruled it unconstitutional.

• HB 2416, passed the same year, requires the clinic to perform an ultrasound before an abortion, regardless of whether the patient has already had one elsewhere.

• SB 1394 requires abortion providers to ask patients the reason they are seeking an abortion. This data is stored with the Arizona Department of Health Services.

• SB 1367, passed in 2017, requires surgical abortions be performed at a clinic within 30 miles of a hospital with admitting privileges. This law "diminished the ability to have a rural network" for abortion care, according to Tucker.

"If you can't access the care, then it's not really a right," she said.

The combined effect of multiple TRAP laws have made it so difficult for people to access abortion care that many end up terminating their pregnancy later than they would have liked, which happened to Maryon Rocha.

"After my experience, and having my abortion be later than I wanted it to be, because I had two jobs at the time and was asking for days off for these appointments and getting the money together, I just started talking to all my friends about it," Rocha said. "I told everybody I had an abortion."

A friend connected her to the Tucson Abortion Support Collective, where she eventually became a volunteer. TASC is a collective of volunteers who provide free informational, logistical, physical and emotional support in both English and Spanish to people seeking abortions in Southern Arizona. The group formed in the fall of 2017 after numerous conversations regarding the barriers to abortion care in the state.

"How can we help people not have this shitty experience that we had? That's how I came on board," said Rocha, 32.

They take calls, emails and texts from anyone who requires their services, and then coordinate their schedules to provide help.

"The majority of the people that call us or text us need financial help, so for us there would be no point of being a group that charges, when the people that are looking for this type of help is because they don't have money," Rocha said. "So we decided to be all volunteers. We all have full-time jobs."

In their experience, the biggest barriers that prevent people from accessing abortions are misinformation, stigmatization and money.

Although TASC volunteers were trained to provide emotional support to people seeking abortions, they've found that the most common requests are for logistical help. People need rides to and from the Planned Parenthood clinic, people need help navigating the unorganized funding systems, and people need general advice to know what to expect, since abortion care is shrouded in mystery compared to other types of healthcare.

"A lot of the barriers have been put there on purpose," said Sarah Tarver-Wahlquist, another TASC member.

In Arizona, lawmakers decided that ACHCCS, Arizona's version of Medicaid, should not cover abortions and private health insurance providers are not required by law to offer coverage for abortions.

"So even if you are on (AHCCCS), or even if you have your insurance through work, it's almost never going to cover your abortion," Tarver-Wahlquist said. "Almost everyone has to pay out-of-pocket, and there's not a sliding scale at the clinic for that."

In Tucson, the cheapest an abortion pill can be is $520. Late-term surgical abortions can cost up to $2,400.

Planned Parenthood Arizona has a financial assistance fund, but they don't advertise it on their website. Most of their funds come from private donations of varying sources, so staff has to work with patients to see if they're eligible to receive any money.

There is also a national network of abortion funds, but they don't fund patients through the Planned Parenthood clinic directly. Tarver-Wahlquist says the network has started to partner with TASC to help make those connections with people seeking abortions in the Tucson area.

Tucker, with Planned Parenthood, said that receiving financial assistance for an abortion requires a lot of piecing together the monies from various sources. They're looking at solely donation-based assistance.

When a person is deciding

whether to terminate their pregnancy, they sometimes turn to organizations called "crisis pregnancy centers" that advertise as places to receive counseling, but actually dissuade patients from pursuing abortion care and direct them to adoption services instead.

"I think it was incredibly significant, this session, that the Senate ended up not passing that other budget amendment for $2.5 million for crisis pregnancy centers," said state Rep. Kirsten Engel, who represents midtown Tucson. "That was just a huge defeat for (Center for Arizona Policy) and very unusual, because CAP is behind the scenes controlling the Republican Party on this issue."

"Arizona's abortion restrictions exist because politicians have sought to bring an end to abortion, not to protect the health of the women having abortions," she said. "Medical science has shown that TRAP laws made abortions more risky, not safer."

She references a 2018 study from The National Academies of Sciences, Engineering and Medicine, which finds state regulations that require patients to make multiple in-person trips and wait multiple days actually puts them at risk for serious complications and possibly more invasive measures.

Engel believes the legislature's role is to set public policy that is most beneficial to the population, not to enact laws that reflect personal viewpoints.

"The legislature should really appoint a special study committee on this topic, to look at the impact of Arizona's abortion laws on the health of women and what changes we need to better protect women, especially women from all socio-economic backgrounds," she said.

Tucker said the state government punishes people on both ends: they do not promote comprehensive sex education across communities or provide access to low-cost or free birth control, while also restricting access to abortion when people do get pregnant.

"I would say that it's a larger structural issue that keeps certain groups in this population in the constant cycle of poverty and robbed of any sort of agency or social mobility," she said.

"I understand how panicked people are, and they should be, but I also think that throughout all of history people with privilege and resources have gotten the healthcare that they need, and they will continue to do so," Tarver-Wahlquist said. "It's low-income folks and people of color who are being targeted by these laws and who are currently the most impacted and will continue to be."

A more holistic approach, according to Powers Hannley of District 9, would be to ensure every Arizonan has access to medically-accurate sex education and low-cost or free birth control. She said there are already maternal and childcare deserts throughout Arizona, and restricting abortion only makes it worse.

"As long as we're calling ourselves a pro-life state, it has to go beyond the fetus," Powers Hannley said.

The members of TASC believe the real solution lies in de-stigmatization of abortion. That would mean going beyond the idea that abortion is an unfortunate last result, but rather a regular part of healthcare.

"Every time we let the conversation be about that, we're still saying that abortion is wrong," Tarver-Wahlquist said. "Abortion care is healthcare, that's what it is."