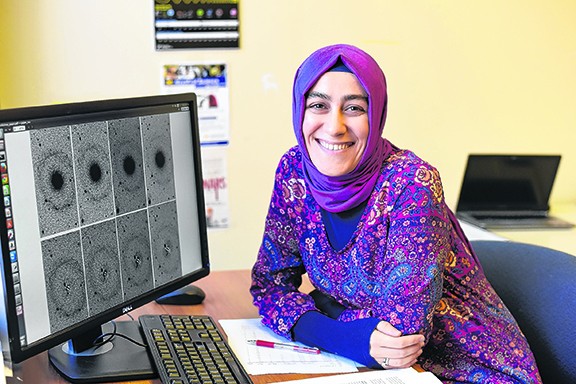 Courtesy photo
Burçin Mutlu-Pakdi: “I just wanted to show people that anyone can study science, it doesn’t matter your dress or gender.”

A few decades ago, a young Girl in Turkey pasted images and quotes from Albert Einstein into her journal. She loved physics. She loved the night sky. And she was told not to pursue science; that it's competitive, that her country didn't have many opportunities in astronomy, that women just ended up being teachers. In April, she will deliver a TED Talk about the galaxy that is named after her.

"There was a lot of societal pressure and stereotypes, but I didn't listen." Burçin Mutlu-Pakdil said. "I kept going."

Mutlu-Pakdil always had a passion for science, particularly physics. The rigidity of it, the truth of it, the sense of discovery it yielded. However, she didn't always have Einstein as an inspiration. That is until a grade school assignment for which she had to write an essay on her idol. She didn't have one, so she asked her older sister who the smartest person ever was.

"I began reading about him and found out that his life was so cool!" Mutlu-Pakdil said.

From then on, while other girls her age kept journals with pictures of rock stars and actors, she kept one of scientists. Her sister saw her passion, and got her children's science magazines. But there was a problem.

"I didn't see any women in them," Mutlu-Pakdil said. "And I wanted to be in those books."

She knew education was the key to her success. She grew up listening to her father's stories at the dinner table about how he was successful in elementary school, but he dropped out after fifth grade to take care of his parents.

After high school, she left Istanbul to earn her Bachelor's degree in physics, the first generation in her family to do so.

"People asked me if I was crazy, leaving Istanbul and studying physics." she said.

"Around that time there was a headscarf ban, so I couldn't be faculty at the university. It annoyed me so much, I just wanted to show people that anyone can study science, it doesn't matter your dress or gender."

In 2009, she came to the United States for her higher education.

Texas Tech University for her master's degree, studying at University of Arkansas, and University of Minnesota for her Ph.D. In every city she lived in, she looked for high schools to mentor students at.

"It's amazing to hear young girls discussing science," she said. "It gives me hope."

In July 2017, the University of Arizona offered her a postdoctoral research associate position. She now spends her time in Steward Observatory studying the structure and dynamics of galaxies, dwarf galaxies, galactic rings, and supermassive black holes. The research has taken the once young girl from Turkey to observatories in Hawaii, Chile, Australia and more.

"Yes, you could say I'm enjoying this quite a lot." she said, laughing.

While at University of Minnesota, Mutlu-Pakdil discovered an extremely rare galaxy. So rare, in fact, that one like it has never before been described. Her research paper, published November 2016, describes it as "resembling Hoag's Object with a complete detached outer ring".

That is to say, it is a galaxy with a perfect circle of stars surrounding the core, however upon further inspection, it was found that inside the outer ring there is another faint inner ring closer to the core. This makes the galaxy even rarer, possibly even one of a kind. The galaxy's catalog name is "PGC 1000714," but it is also known by its nickname: Burçin's Galaxy.

Burçin's Galaxy will be the topic of her Vancouver TED Talk this April. Peers recommended she apply to be a TED Fellow late last year.

"I really love TED Talks, and I've always wanted to meet with the talkers," she said. "But I didn't think I'd get in."

However, in November a representative interviewed her, and lo and behold, they accepted her. Now, alongside inspiring young women in STEM and her research into the endless discoveries of the universe, she also engages in weekly webinars with like-minded members of the 'TED Fellows Group'

"Seeing this kind of success is very motivating," Mutlu-Pakdil said. "As long as you don't quit, it will happen. You will fail several times, but one way or another you will get results. Dream high."