An excerpt from Tucson author Alice Hatcher’s debut novel, The Wonder That Was Ours 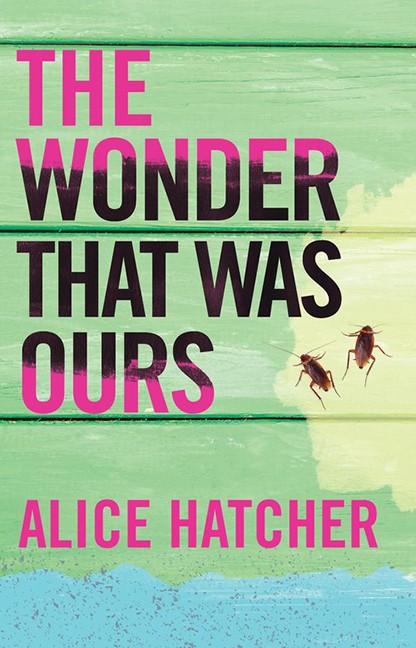 Tucson author Alice Hatcher will be signing copies of The Wonder That Was Ours from 2 to 4 p.m. Saturday, Sept. 8, at Barnes & Noble, 5130 E. Broadway Blvd. Hatcher’s work has appeared in Alaska Quarterly Review, The Beloit Fiction Journal, Notre Dame Review, Fiction International, Lascaux Review, Fourth Genre, Chautauqua, and Gargoyle, among other journals. Her novel The Wonder That Was Ours, winner of Dzanc Books’ 2017 Fiction Prize and long-listed for the Center of Fiction’s First Novel Prize, was released earlier this month. Hatcher’s can be found at www.alice-hatcher.com.

Individuals governed by prejudice will question our authority to recount the events of that week in November, when so much foul jetsam from the cruise ship Celeste washed up on St. Anne's shores and the heat inside Professor Cleave's cab, our classroom, nearly stifled our dreams—the week everything burned. They'll say we spent the week deep in sleep, addled by ingrained habits and sloth. What do they know? The subject of cockroaches' circadian rhythms is largely misrepresented in the scientific literature. Self-proclaimed experts on the affairs of insects will tell you we spend our days lazing beneath rocks and the floor mats of cars, napping in cupboards or slumbering in sewer pipes.

To quote J.B. Williams's Entomological Atlas of the Americas, "Pesky varieties of cockroaches generally lie dormant for all but four nocturnal hours in a twenty-four-hour cycle." In a typical oversight, Williams discounts the fact that, in cases of high population density ("infestation," he'd say!) and food scarcity, we extend our waking hours to forage. Though Williams and his ilk would never acknowledge it, crowding and scarcity have become the norm for cockroaches, and sleep deprivation endemic. Williams bases his spurious claims upon abstract conditions that hardly correspond to reality, unless one accounts for the practice of mass extermination. Williams concedes as much when he writes, "If cockroach populations are controlled, whether by standard commercial insecticides or boric acid applications, humans will rarely see them in daylight."

In pointing out the deficiencies in Williams's logic, our intent is not to quibble over an odd claim in a deeply flawed book, or to expose another apologist for the insecticide industry. We simply hope to defend our credibility. Sleep was a luxury that November. Thanks to a depletion of Freon and an ailing compressor, the air conditioning in Professor Cleave's cab was sporadic at best. We drifted in and out of feverish dreams, sleeping in short shifts that ended whenever Professor Cleave started to lecture us. Whatever dull-witted entomologists say, at least some of us were awake most of the time.

The day the Celeste docked at St. Anne's terminal, Professor Cleave had spent the entire afternoon scolding those of us sheltering in his cab, bartering our peace of mind for an occasional breath of air conditioning. He'd nearly outdone himself, calling us everything from "hopeless delinquents" to "irredeemable wastrels." To be fair, we'd been testing the limits of his patience, scurrying around the floor mats and darting through the vents. An "especially ill-mannered assembly" (his words) had spent hours idling at the base of the gearshift, making "lewd gestures" with our antennae. Each of Professor Cleave's reprimands only incited "further effronteries and grosser forms of misconduct." Some of us skittered around the radio with raised antennae, hoping to intercept DJ Xspec's Heavy Vibes Hour on Kingston's 103.5 Jams, which broadcast across most of the Caribbean on a clear day. Others scuttled across the windshield, hoping to preempt a lecture about the defection of common sense from St. Anne's electorate—a familiar topic in Professor Cleave's repertoire—or another recitation from An Anthology of Classical Literature, the most immediate (and obvious) source of our unrest.

Who could blame us? Professor Cleave had been parked on the curb before St. Anne's cruise ship terminal for almost an hour, drumming his fingers on the steering wheel and muttering about everything from the price of petrol to his latest bout of indigestion. When he wasn't staring at the policemen patrolling the streets around the duty-free mall, he read aloud from the anthology splayed across his lap. He trailed his fingertips over faded typeface, enunciating each syllable of Socratic dialogues to focus his flagging energy. Still, he felt distracted, and frustrated by our unwillingness—not our inability, he maintained—to quiet ourselves.

"You are not serious about anything of consequence, my six-legged students." He closed his book, and with a jaundiced eye regarded those of us near the radio. "You'll come to a very bad end with your lawless behavior. In mocking education and the rules that govern civil society, you have associated yourself with the growing criminal element on this island."

Mildly contrite, we let our antennae droop over the dashboard's edge, as if demoralized or dumbfounded by his allusions to etiquette and ethics. Members of a recidivist clique bristled around the gearshift.

Professor Cleave shook his head at these, his most recalcitrant students. "Many of you, I fear, have moved beyond the pale of reason and moral recall."

In the absence of our frenzied chatter, an unsettling silence and the full weight of the day's misery pressed upon him. He drew a fold of crumpled bills from the glove box and reviewed the morning's most unfortunate episode. At noon, three of us had emerged from the vents and brandished our antennae at two Canadians spraying some horrid substance (the latest toxin to be labeled "perfume") in the close confines of the cab. This, we admit, had been only one of our costly indiscretions.

"Through brazen acts, and in the most self-defeating manner, you have spurned the gratuities that sustain this cab, and, by extension, your sordid lifestyles." Professor Cleave slipped the bills into an envelope and peered at the overexposed world beyond his windshield.

Outside the terminal, a man in a straw fedora was trying to sell tourists photo opportunities with a diapered monkey. Americans and Europeans wandered past battered card tables crowded with carved wooden pipes and shot glasses. Old women in headscarves shooed flies from piles of fruit. Men on rusted bicycles skirted potholes, spurred by the wailing horns of flatbed trucks.

Professor Cleave leaned forward to release the beads of perspiration pooling in the small of his back and looked into the rearview mirror, at the creases defining the dark planes of his face and the black and grey hairs competing for dominance at his temples. "I am tempted to get some traps. If my wife hears about your conduct, she will buy them herself. Cora can be quite severe, and this time I won't stop her."

He softened as he spoke, knowing (as did we) that he possessed neither the inclination nor the will to fumigate his cab. We'd long served as sounding boards for his lectures on international events, local politics, and St. Anne's General Transport Workers Union. If not model students, we possessed an ability rarely demonstrated by his family and friends to concentrate on his running—or, as some would say, droning—commentary. Who but the Earth's most downtrodden would suffer this sort of claptrap in exchange for a bit of air conditioning? In a more just society, we would have been listening to 103.5 Jams.

We did appreciate the times he read literary classics aloud, dramatizing dialogue and lingering over lyrical phrases to capture their cadence. Granted, we could be fickle. Only days earlier, we'd shown due deference to Dostoyevsky, lining up on the dashboard to the spellbinding sounds of Crime and Punishment. A week before that, in an admittedly unfortunate display, we'd hissed during The Metamorphosis, confirming Professor Cleave's troubling sense that there is no accounting for taste. Really, though, what did Franz Kafka know about cockroaches?

Whatever failings delusionals and cranks attribute to cockroaches, we're relatively ecumenical in our interests and generally subdued. During short recesses—for Professor Cleave always suspended his lectures when passengers entered his taxi—we withdrew behind the vents. We know how our bread is buttered—or in this case, from whence our air conditioning flows. In his excessive anxiety and frustration, Professor Cleave hardly differed from other humans. In other respects, he admirably distinguished himself. Over millions of years, our antennae have evolved into delicate receptors attuned to the most subtle gestures of those likely to harass us with aerosol cans and rolled-up newspapers. We know humans' very thoughts and feelings, for our survival depends on it (our collective mind reels, sometimes!). Professor Cleave, for all his faults, possessed a relatively peaceful disposition; he tyrannized us with philosophy and poetry rather than pesticides.

The day the Celeste docked, our "rude antics" had much to do with the weather. Like everyone else on St. Anne, we'd grown ill-tempered over three months of record-breaking heat and could think of little but our own misery. Unfortunately, our constant fussing had been a source of great annoyance, and worse, financial loss for Professor Cleave. We'd forced him to compensate for the day's losses by parking at the cruise ship terminal late in the afternoon. We warily observed his movements, our antennae twitching in currents of recycled air.

"If Cora knew what I was doing, she would insist upon your eradication. Let me tell you, her mood has been foul. She's been exceptionally parsimonious in her chocolate rations this week. I married a woman of minor vices made joyless by moral vanity."

Even the least observant among us noted the disjointed nature of his speech. He'd grown preoccupied, weighing his potential for profit against the complications often posed by difficult passengers—namely, those ejected from shuffleboard society and the food courts of floating shopping malls. What predictable specimens they were, these modern-day castaways.

Bellicose drunks forced to walk the proverbial plank usually kicked and screamed on their way out of the terminal, railing in defense of their democratic rights to drink. They filled the cab, our classroom, with their reeking tirades, registering their most bilious opinions on the floor mats. Ejected exhibitionists propounded libertarian theories about the nature of personal freedom in its most noble and epilated expressions. Indiscreet drug addicts excelled as backseat drivers, honing in on seedy establishments avoided by all but those drawn to nameless pushers and filthy bathroom stalls. Failed suicides, legal liabilities for frazzled captains, generally went one of two ways. Consigned to strange shores, some succumbed to despair, while others, graced with a sense of rebirth, countenanced life in a state of unparalleled bliss, equally enchanted by palm trees bending in the breeze and the duct tape peeling from the cab's cracked vinyl seats.

"They grow more dissolute each year." Professor Cleave scanned the sidewalk until he saw Portsmouth's harbormaster, Desmond James, at the terminal gate. "I'm sorry to do this, but your appearance disturbs Des, and we need information." He waved to Desmond and used his anthology to ferry us, in twos and threes, from the dashboard to a vent. "If you have any sense, you'll take this time to consider the monetary consequences of your latest outrages."

Need we elaborate on the indignity of being shuttled out of sight, even on the shoulders of master rhetoricians and philosophical giants? If only to atone for our misdeeds, we filed, chastened and infantilized, into the labyrinth beneath the hood. Professor Cleave closed the vent behind us, and we crowded against its loose slats to observe him.

Excerpted with permission from The Wonder That Was Ours, copyright © 1018 by Alice Hatcher. All rights reserved.