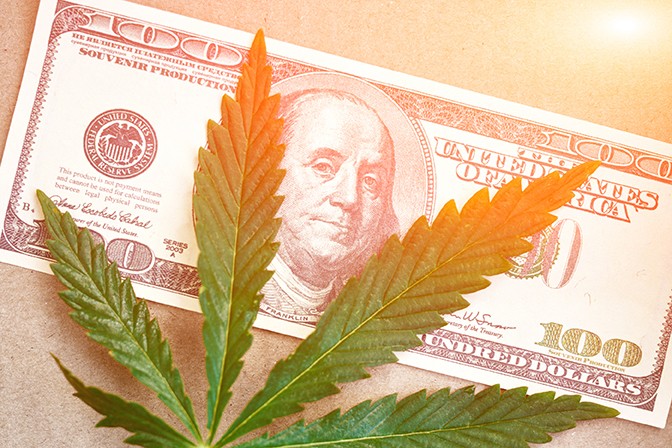 Some members of Congress recognize this issue, and are trying to pass legislation to make it easier for banks to accept cannabis cash. However, those measures seem to have run in to trouble.

The House Appropriations Committee blocked a measure Wednesday, June 13, that would have prohibited the U.S. Department of the Treasury from "penalizing a financial institution solely because the institution provides financial services to an entity that is a manufacturer, producer, or a person" involved in the cannabis industry.

The issue of cannabis banking stems from several factors of federal oversight leading back to substance's status as a Schedule I drug.

For starters, there's the Federal Deposit Insurance Corporation, which insures just about every bank in the country. These guys can get banks to bend over backward meeting their criteria to ensure insurance, and meeting those criteria is an intricate task.

One such rule requires banks to verify their customers' finances don't come from illegal sources. Well, despite legality in more than half the country, cannabis is still somehow illegal on the federal, so there goes that plan.

Even if a bank were feeling brave enough to stand up for the cannabis industry, the Bank Secrecy Act requires banks to identify and report potential money laundering. With felony penalties, few banks would take on the risk of trusting cannabis businesses despite legitimacy.

Many in the industry have begun eyeing credit unions as a potential safe haven for cannabis cash, but even they have federal overlords to which they must bow, even if they're state chartered.

In Arizona, no state law, regulation or policy bars credit unions from providing accounts to cannabis businesses, but the credit unions still have to meet criteria for insurance from the National Credit Union Insurance Fund.

Congressional measures attempt to assuage this fear of penalty by clearly defining money from legal cannabis businesses as legal revenue, which would help banks meet FDIC regulation, but the bookkeeping required to adhere to the Bank Secrecy Act still adds a deterrent.

This isn't a matter of supporting legal cannabis across the country; this is a safety concern. Without a safe place to store the money coming into the industry, cannabis businesses can be prime targets for theft—not only dispensaries, but cultivation sites, too.

While Congress is certainly the national forum to hash out partisan disagreements, this issue shouldn't be subject to conservatives' distaste for cannabis.

One of the political right's biggest fears for an expanding cannabis industry is crime, and here they have a shot to drastically reduce the amount of crime surrounding that industry. Then again, maybe that's exactly why they're fighting to keep the money out of banks and within reach of criminals.