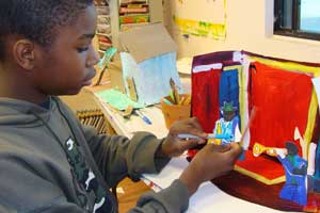 Mari Herreras
South Park Neighborhood resident Jahvon Simpkins, 11, has spent two hours every Saturday for the past three years at ArtCulture Partnership.
Jeanane Simpkins sits with a paintbrush in her hand, surrounded by the sounds of art being created.

Simpkins says if she wasn't at the ArtCulture Partnership, at 35th Street and South Park Avenue, she'd probably be watching TV all day at home, or perhaps hanging out with friends--and maybe, just maybe, getting into trouble. Instead, for the last three years, the 12-year-old artist has been coming to the South Park Neighborhood art center every Saturday afternoon, along with her brother and a group of other neighborhood kids interested in art.

But by the end of this month, barring a miracle, the center will close its doors, yet another victim of this down-and-out economy.

The city provides $55,000 to the Tucson Pima Arts Council and the Metropolitan Housing Corporation to pay the salary of the center's director and to keep the facility in operation. Two weeks ago, Xóchitl Gil-Higuchi, the center's director, found out those funds would no longer be provided after February.

This is not sitting well with people like Jeanane Simpkins.

"I think they should keep it open. I think it's pointless, and I don't think they have a real reason," Simpkins says while she paints a wide swath of purple on the large white sheet of paper before her.

Across the table from Simpkins is Rizwan Zaki, a 13-year-old who has also been coming to the center the last three years to paint and to work with clay and the center's graphics-art computers--his favorite.

"Another reason why it's important is if we want to paint something and show it to someone, this is the only place we can," Zaki says, referring to the center's gallery space where the kids get to show their work several times a year.

ArtCulture sits in Tucson City Councilmember Steve Leal's ward, and he's not happy the city decided to cut funding from programs that offer services to youth--especially in a neighborhood like South Park, where kids need extra support.

"I've publicly stated this previously: It is premature cutting youth programs, programs that affect urban families, because we haven't looked at the city's revenues yet. We don't really know where we are. For staff to say, 'We'll look at revenues later,' well, that means we reduce their funding, and we'll never get it back. I think it is simpleminded to look at only supporting core services, police, streets and fire. It's a 19th-century understanding, and we know that society is more complicated than that," Leal says.

Leal says he understands that the economic problems the city, county and state face are serious. But he says that if block-grant money and other program funds are taken away, then crime-prevention is eliminated, and that makes life difficult for police.

"We then can't arrest our way out of the problem. These programs aren't just feel-good stuff. This is strategic and thoughtful. This is really not extra," he says.

Leal, who announced recently that he will not seek re-election, says he thinks the city needs to take another look at the $1.4 million it pays the county for animal control. He says that towns like Oro Valley and Sahuarita don't pay to receive those same services, which are purely a county function.

"So let's stop paying. We pay the county once with property taxes, and then we pay them twice," Leal says, suggesting that the money going to animal control instead be divided to extend programs like ArtCulture Partnership.

Leal takes the cuts personally when it comes to the art center, he says. His office bought about $10,000 worth of graphics computers and software for the kids to use--which have inspired kids like Zaki. Leal says he plans to put the computers in his office until he finds a good home for them.

Meanwhile, when city officials bring up the South Park Avenue building and wonder what to do with the space that has been home to several art studios, a gallery and three apartments rented out to the center's artists in residence, Leal says he reminds them that it shouldn't be their job to decide the building's future.

"Let the community make that decision," he says.

City Manager Mike Hein did not return calls before our press deadline.

Roberto Bedoya, TPAC's executive director, describes the situation as very sensitive, but also says it's a sign of the times when it comes to the economy and arts funding. Arts organizations have to try to survive creatively during these times of uncertainty--and there is also plenty of uncertainty, Bedoya says. For example, he doesn't know what allocations he will have next year from the city and county, and he knows private donors are waiting to see how their portfolios shape up.

Bedoya describes cuts being made now to organizations like ArtCulture Partnership as being "prudent."

The kids at the art center most certainly disagree, and so do the adults. Jeannette Seitz, secretary of the South Park Neighborhood Association, says ArtCulture has proven itself to be an important community center these past three years.

"I've noticed that in the last six months or so, they've really had some visible projects, particularly with the children. The community had started to take notice," she says.

Seitz moved to the neighborhood about three years ago, and ArtCulture has become an important part of her life, especially because she is wheelchair-bound. She found the center particularly accessible from her house, so she could attend gallery openings and art classes.

"It just seems sudden. I guess I don't understand the financial position the city is in," she says. "I know how it is for me when I don't have any money; if it really is that bad, I understand, but I would have hoped that they would have figured out a way to save it."

SAACA and postponements to upcoming events

Charlie Spillar: The Man in the Moon