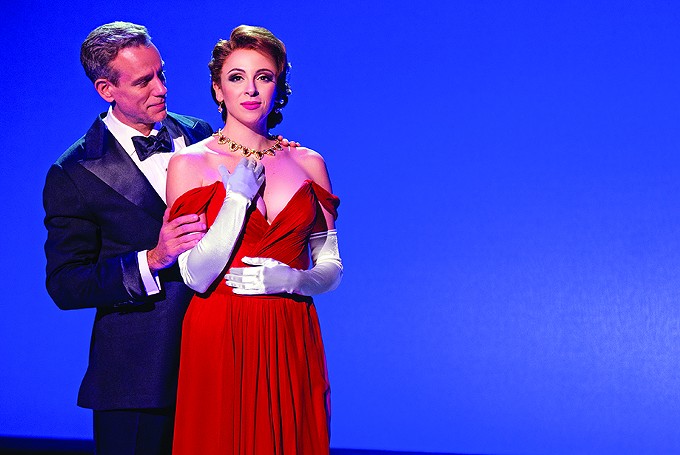 (Matthew Murphy of MurphyMade/Contributor)
Adam Pascal and Olivia Valli play Edward and Vivian as they make a magical connection at the opera.

Adam Pascal is pretty pragmatic about what he does in musical theater.

Pascal, who has played some of the more iconic leading men of modern musical theater, is in Tucson with the touring cast of “Pretty Woman: The Musical.”

He played Roger in “Rent,” Radames in “Aida,” Huey in “Memphis,” and Shakespeare in “Something Rotten.” Now, he is playing Edward in the musical based on the 1990 film in which a wealthy businessman hires as an escort — the free-wheeling prostitute, Vivian.

The show runs at Centennial Hall via Broadway in Tucson through Sunday, July 24.

When asked what drew him to the role, Pascal responded, “I would love to give you some sort of artistic, creative answer, like well, I’m drawn to the character for blah, blah, blah. But the real answer is, it’s a job. You know?”

Still, he enjoys the tour and hopes people will see it.

“Some of the things that are so fun about playing him is that he’s so unlike me and his background is so unlike who I am,” Pascal says.

“That’s what’s so much fun about being an actor. You step into the shoes of these people that are very unlike you. The more unlike me a character is, the more fun it is for me. I’m very much somebody who likes to disappear.”

The show is a romantic fairy tale, one which has a slightly more modern twist than the original movie, Pascal says.

“It’s very much a Cinderella-esque type of story,” Pascal says. “In our version, it’s also very much a female empowerment kind of story. It isn’t the film to a certain degree. They’ve taken steps to sort of amplify that aspect of her character and her character’s journey, to really make it a story in which she saves herself with a little help from him, as opposed to he saves her with a little help from her. I think it works much better that way.”

While the musical does still have Roy Orbison and Bill Dee’s “Oh, Pretty Woman” song in it, the rest of the music was created for the musical by Bryan Adams and Jim Vallance, the well-known singer-songwriter duo.

Pascal says this is a show where people have permission to laugh and to feel happy. He describes the show as a fun evening where everyone leaves smiling.

“It’s not a Mamet play, it’s not Shakespeare,” Pascal says. “You don’t need to be an English Lit major to appreciate what we’re doing. It’s fun, simple storytelling for the masses.”

Vivian is played by Olivia Valli, who understudied Elphaba during “Wicked’s” second national tour and who also got to play her own grandmother in “Jersey Boys” on New World Stages. Valli is the granddaughter of Frankie and Mary Valli. Her grandfather was the lead singer for The Four Seasons.

Pascal says the show works so well is because he and Valli are friends off-stage and have a solid relationship and chemistry that they bring to the stage. He says it’s easy to forget her famous family lineage.

“She and I have, luckily enough, become really good friends,” Pascal says. “We have a similar sensibility. We come from similar areas — she’s from Jersey and I’m from Long Island. We hit it off and we get each other’s sense of humor. That translates onto the stage. That’s what makes the relationship between those two characters work — she and I are really good friends.

“We got lucky that we both really liked each other and we’re friends. You’re out here on tour and you support each other through your ups and downs. She and I both have significant others who we are separated from, so we bonded over the difficulty of missing our partners and being lonely and yearning for them.”

Pascal describes the touring show as being funnier than the movie and the Broadway show. He credits Valli as being the reason for that.

“That has a lot to do with her — she’s really funny,” Pascal says. “She brings out that element of the character.”

No stranger to unusual costumes and ever-changing looks, Pascal says his costumes for this show has been integral to getting into character.

“It’s all about the suit,” Pascal says. “His power suits that he wears inform to a great extent who he is, where he comes from. I’m not somebody who spends a lot of time in a suit, so it took me some time to get comfortable with the feeling of being in a suit and how to wear it. It’s definitely helped me find the character.”

He encourages fans of the film to come to the musical, even while stressing that it is different.

“It’s the adaptation of the film to the best of our ability with some refreshed re-imagining of a couple different characters,” Pascal says.

“Also, this incredible music by Bryan Adams. That’s the biggest difference from the film. We’re telling this story with this great original score by this incredible rock/pop composer that has had so many hits.”

They’re the kind of earworms that people won’t be able to get out of their head.

WHEN: Various times through Sunday, July 24