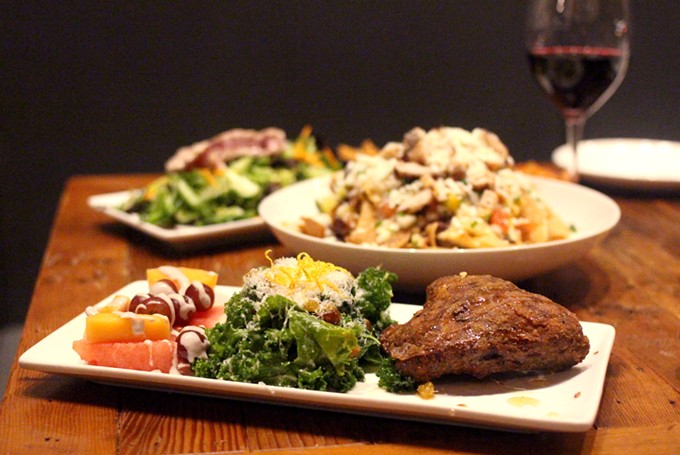 Heather Hoch
Dishes at Ermanos are mostly satisfying, though they could use some tweaks.

When it comes to restaurants being misunderstood or protested based on their name, Ermanos certainly isn't in the hot seat in Tucson. Still, without already knowing that the name is a pun based on the fact that a pair of brothers named Erman runs the restaurant, it's not exactly clear why the Spanish word for brother is misspelled. Indeed, even after explaining this to several people, I'm met with something along the lines of "Oh. Well, I still don't like it."

Name aside, though, the craft beer and wine bar has managed to bring some class to Fourth Avenue. Looking across the street, you'll see the seemingly frequent police presence posted up outside of O'Malleys, responding to whatever drunken tiff happened moments before. For folks looking for a more tame and maybe adult bar experience out of the college drag than, say, The Wreck, Ermanos and their neighbors in the alley Public Brewhouse have become a spot for young professionals, grad students or grown ups in general.

It's that ambience, with the meticulously restored and reclaimed historic building that encases it, that is perhaps what Ermanos does best, offering an experience previously unavailable in the area—casual, yet well conceived. Although Mark and Eric Erman had a strong idea of what their bar and restaurant (in that order, according to them) should look and feel like, they've also been willing to adapt. Initially patrons were expected to order at the bar, in keeping with their bar-first M.O. Relatively quickly, though, the restaurant switched to a more traditional table service style. While this overall made the ordering process at Ermanos easier for diners, on the slower off-hours it seems a single bartender is expected to shoulder the dining room and bar. To make matters worse, those bartenders, while knowledgeable and helpful on the beer side of things, seem less than familiar with the food menu. After asking about three different ways what was on the Sonoran cheese board, which is described only on the menu as "territorial accoutrements," the stand-in server said he could check in a, let's say, labored tone. I said, "O.K." and he paused, looking at me as if I was either joking or playing some bizarre game of restaurant chicken. After about seven minutes and helping three other customers, he returned, having forgot to ask what was on the board. Typically, the service is stronger at the restaurant, but that may be a sign that the switch was the right move and should be completed in full: let your servers serve and let your bartenders tend bar.

Those aren't the only changes the restaurant has seen, though. While opening with the one-two punch of Dave Valencia and Jesus Cayeros in the kitchen brought immediate recognition to the initial menu offerings, once Valencia and Cayeros were gone, the kitchen was taken over by a young chef named Matt Kraiss. Now, about six months into running the show, Kraiss began a bit bumpy but has become more comfortable and confident, though the menu still shows some marks of a less experienced editor and composer.

What does that mean? Take, for instance, two plates: the fried chicken and the veggie sandwich. Both are organized under entrees, the former for $13 and the latter for $10. The fried chicken, which offers tender, poached dark meat in an overly crisp (read: tough and appearing to be slightly burnt) breading, comes paired with a fruit salad and a kale salad. The sandwich, which is filled with pesto, cotija and tomato confit, is served all on its own. Next to each other, the sandwich's plate looks oddly bare. Even the burger, which is certainly tasty and worth ordering, is $11 on its own with the option of a $3 up-charge for fries. However, it's not as if the kale salad, which is a mishmash of popular salad ingredients in a sweet and tart dressing, or fruit salad lend particularly well to the fried chicken as a dish anyhow.

The ahi tuna salad ($14), which inventively pairs a housemade kimchi with seared ahi and a miso vinaigrette, is great on paper, but the bed of, what looked to be chopped salad mix complete with julienned carrots, served as an unimpressive base for the dish. Unfortunately, too, the tuna, which is served in a generous portion, seemed a bit (but not terribly) removed from the fresh side of things.

The appetizer menu, which serves up a tropical shrimp ceviche ($11), fig bruschetta ($9), avocado fires ($7), nachos and more, offers some of the menu's best. Oddly enough, the nachos ($11), which come covered in beans, jalapenos, and a gouda sauce, stood out. Much like the restaurant's name detailed earlier, putting gouda on nachos might seem like a confusing choice, but here it works. If that's not enough cheese for you, the house mac 'n' cheese ($8) will offer up a creamy, comforting take on the classic dish.

In general, dishes seem to be on the right track flavor-wise, but the execution and composition can leave you wanting more. It's not as if the plates served off of the Ermanos menu (of which there's also dessert, brunch and specials) are unsatisfying and the prices are reasonable, but they definitely could use tweaking to really shine as brightly as that opening menu did.

Of course, Ermanos is a bar first, so you'll always find a progressive list of craft beer from some of the best local, national and international brewers, on tap and in the bottle. The bar has also been a part of several collaborative brews with local brewers that have used native and unique ingredients to craft some really tasty and interesting beer, while also keeping the camaraderie among bar and brewer strong in the community. That carefully curated beer list is available updated online and always offers a variety of styles, which can in turn be sampled in flights.

Similarly, the wine list, which ranges in esoteric to very drinkable, can be ordered in flight, glass or bottle. Ermanos also offers red, white and sparkling sangrias, which serve up refreshing twists with thyme, cucumber and grapefruit, and are just $4 per glass during happy hour.