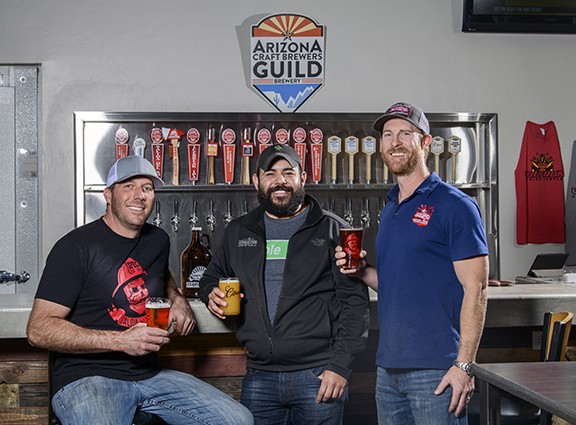 Voltron Brewing is the brainchild of Taylor Carter and Matt Gordon, owners of Sentinel Peak Brewing, along with Borderlands Brewing owner, Mike Mallozzi. The 9000 sq. ft. space is located at 330 S. Toole Avenue, next to Rocks and Ropes, and opened to the public in January.

The company is named after 1980s cartoon Voltron, where a group of space explorers form together into one super robot to defeat their foes. As a joke, Gordon labeled a joint Google drive file between the breweries "The Voltron Collaboration" and the name stuck.

"Everything we were doing just kind of seemed to line up like Voltron," Carter said. "It's basically two breweries under one roof."

The new brewery boasts a joint taproom for guests as well as individual brew houses and fermentation tanks for both breweries. They plan on sharing the canning line and the cost of utilities, Carter said.

"It's kind of like dueling pianos, how the brew houses face each other," Carter said.

Around 2018, both breweries outgrew their brewing capacity and were individually looking for warehouse space. Sentinel Peak had originally signed the lease at the new property so they could upgrade from a six-BBL brewing system to a 15-BBL system (a BBL is about two kegs of beer) after buying Dragoon Brewery's old brewing equipment. With this increase, Sentinel Peak started brewing for both their locations at the new warehouse instead of their flagship brewery at Grant Road and Swan Road.

"We were growing across the state and now we're pretty much in every grocery store in Arizona," Carter said. "It's exciting because we just continue to grow and expand but we had to do something or there were going to be problems."

Also in 2018, Borderlands purchased new fermentation tanks, but the floor at their downtown brewery on Toole Avenue was already overloaded by the weight of their current equipment. Mallozzi needed to find warehouse space fast to keep up with demand from the public.

"I didn't know what we were going to do, but then I saw on social media that my friends at Sentinel Peak just signed a lease on a warehouse" Mallozzi said. "We asked if they would be interested in sharing the space and sharing costs. Thankfully, they said yes."

Borderlands increased their brewing capacity by 30 percent since moving brewery operations to the new location, according to Mallozzi. He said one of the biggest advantages both breweries now have is the ability to purchase brewing supplies together, which should help both companies cut costs while increasing their capacity to brew and sell beer. Mallozzi notes recent tariff increases on aluminum and steel have had negative effects on the brewing industry, as a whole.

"Trump's tariffs have actually put a huge damper on the industry because it has hurt the aluminum and steel, which are the two metals our industry uses," Mallozzi said. "This allows us to expand production and hire new people if we need to."

Mallozzi also said the extra capacity allows the brewery to try new creations without having to give up space from their product line. Borderlands will also be brewing for their Toole location at Voltron Brewing.

"With the extra capacity, it gives us the extra opportunity to do more with innovation and experimentation," Mallozzi said. "The real value is in future growth and savings by sharing costs with Sentinel Peak."

"We're pretty excited about this beer, it's fantastic," Taylor said. "I can't wait for the other collabs we have planned."

Sentinel Peak is also launching their Hero Dunkel, a German style dark lager, as a part of their new 501c3 charity, Hero Support. The charity plans on giving 20 percent of proceeds to first responders and their families going through hardships. Since both owners are firefighters, it's a cause close to Taylor and Gordon's hearts, Gordon said.

"There's a big need for helping first responders who are dealing with tragedy and P.T.S.D.," Gordon said. "We want to give back to that community any way we can."

Editor's Note: Matt Gordon, co-owner of Sentinel Peak Brewing was originally identified as Mike Gordon. This has been corrected.