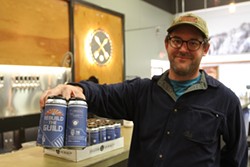 This year has been a struggle for Arizona's craft brewers. Not only have they witnessed their wholesale profits drop as bars and restaurants shut down and then reopen to low capacity, but they're also watching retail profits stall due to a national aluminum can shortage.

While this community is finding new ways to survive the pandemic, the Arizona Craft Brewers Guild has suffered immensely by not being able to hold events and festivals over the past year—their main source of revenue.

But when the brewing gets tough, the tough brew Rebuild the Guild Hazy IPA.

The guild's executive director Rob Fullmer is asking the state's local craft breweries to brew their adaptation of a tried and true guild recipe, sell it to their customers and donate a portion of the proceeds back to the guild.

"We want to try to avoid having to dig ourselves out of a hole when it's 115-degrees and we're trying to get to a point where we can get back to somewhat normal operations," said Fullmer. "The idea is we're going to leverage what our breweries do best and that is making beer."

To help offset production cost, Fullmer said he has made deals with suppliers to offer participating breweries discounted raw materials to make the brew.

"With help from some of our partners, we've got the base grains priced at what the largest brewery in Arizona would get," Fullmer said. "It's an opportunity for a small brewery to make more money on grain savings, even with sharing some proceeds. It's a win-win."

The recipe was written by Dragoon's Brewing Company's owner and head brewer Eric Green, who is also the guild's technical committee chairman. He said the committee had made a variation of the brew three years ago and it was a big hit among the guild community. Greene has made a few tweaks to the previous recipe by bumping up the amount of hops used, but it's very similar, he said.

"It seemed obvious that we should use a throwback recipe that has roots with the guild and ties in something we've done in the past...and it's a great beer," Greene said. "Other breweries and causes have been doing the same type of thing where everybody bands together as one label to raise awareness on an issue and this is our version of that."

Dragoon recently released their prototype for the Rebuild the Guild Hazy IPA, available in 16oz cans at their taproom's entrance and on draft at select establishments in Tucson. This American IPA weighs in at 7% ABV and 30 IBU, giving it a taste of the hops without too much bitterness on the backend. Greene said they brewed a 30-barrel batch of Rebuild the Guild and split it between 16-ounce cans and kegs. Dragoon plans on giving the proceeds made to the brewers guild, according to Greene.

"We adapted it to become an IPA and it turned out to be a slam dunk," Greene said. "The guild does so much for us in legislative efforts, legal advice and events that we need to keep it working."

But Greene said he doesn't expect all of the participating breweries to follow the exact recipe. In fact, he and the guild welcome brewers to create their own variation of it to create a one-of-a-kind experience for the state's beer-loving community.

"We're coming up on the time of year where we like to add mango to things, so we're planning on working with a mango and vanilla hazy IPA," Vernon said. "Anytime we've added vanilla and fruit to an IPA, it goes quick and that's the idea behind this batch. Turn it and burn it so we can make as much money as possible as we can for the guild."

Crooked Tooth has not announced a release date on when their version will be available at this time.

The Arizona Brewers Guild has plans to promote the brew over the next year and hopes to raise upwards of $80,000 from the proceeds, said Fullmer. Now that more than 20 breweries statewide have joined the cause, Fullmer said he hopes beer lovers from across the state will seek out the different variations and attempt to try them all.

"When you've had one of these, you're probably going to want to try another brewery's take on it," Fullmer said. "It could be a lot of fun if we could get some retailers and restaurants to serve them side by side."

To find out more about the Rebuild the Guild recipe, who's brewing it across the state and where you can purchase it, check out chooseazbrew.com.