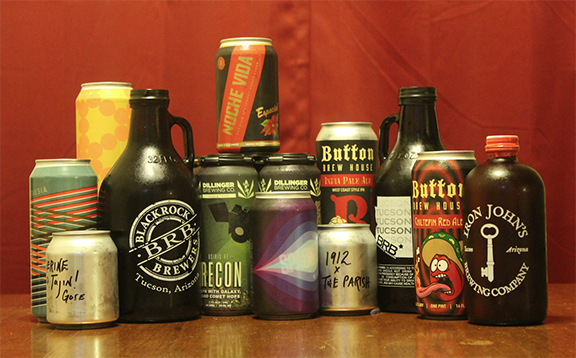 Jeff Gardner
Ahead of Arizona Beer Week, the Tucson Weekly review team got busy trying out some of the most noteworthy and new craft beers coming out of Tucson. Some shocked us, some perplexed us, and some were middle-of-the-road classics. At the end of our tastings, we realized just how lucky Tucson is to host such a lively and diverse craft beer scene.

While the hops in a lesser IPA might overpower the fruity notes, Pueblo Vida's Synesthesia blends its hops and light fruit flavor expertly. This flavor is thanks to the Nelson, Hallertau Blanc and Idaho 7 hops, with the Nelson particularly shining. Accessible yet indicative of the style, the Synesthesia is a great IPA for newbies as well as longtime hop fans.

The Plexus pale ale features Sonoran White Wheat from BKW Farms in Marana, and is as smooth yet intricate as its colorful packaging. Entirely brewed with mosaic hops, Plexus is said to have hints of blueberry cobbler and soft pine seeds, but we received hints of smooth cherry, ourselves.

This locally-sourced double IPA isn't messing around on the hops front, but that's not to say it's overpowering. The Spaceglow, part of Pueblo Vida's "Strata Series," is a full-bodied IPA with light hints of berry. For a more surprising IPA experience, we'd recommend trying their Synesthesia. But for a fan of simple IPAs, this is a reliable sip.

This new Amber Lager from Pueblo Vida seems far more intimidating than it is. The dark color and malty aroma appear more like a stout at first, but the Noche Vida packs all that into an easy-drinking, low-alcohol nod to the classic amber lagers of Mexico. The tasty combination of German-style wheats with hints of dark chocolate and roasted barley easily make this one of the most pleasant beers Pueblo Vida has brewed up this season.

One of Button's flagship beers, don't be deceived by the fiery artwork. While this Sonoran Spicy Ale packs a definite kick, it won't send you running. For being brewed with lemon peel and red peppers, the Chiltepín Red is a smooth ale. The namesake chiltepíns provide a nice borderlands flavor, but thankfully do not overpower the ale. A great balancing act from Button Brew House.

Despite the high IBU number, and being described as "extremely hopped," Button's signature IPA is a smooth American beer that doesn't skimp on flavor. Its delicious flavor—classic ale with pine notes—is the result of five different varieties of American hops. We recommend this beer for anyone who wants a drinkable IPA that isn't overrun with dank, hoppy flavors.

If "brunch beer" is your thing, 1912 may have just made one of the greatest of them all. The Tangerine and Tajin Gose provides a bright yet fascinating flavor. The tangerine notes are immediately recognizable, before switching over to more earthy undertones. While flavors like spicy tajin and vivid tangerine might sound strong, this gose remains dangerously drinkable.

This new brew from 1912 is certainly a sour, but don't let that label scare you away. This fruity blend of tartness and sweetness is one of the most memorable sours we've tried. Named after the French Explorer Rene-Robert Cavelier, Sieur de la Salle, this funky-yet-smooth treat is a great way to venture forth into the world of sours while still keeping those pleasant fruit notes within reach.

In celebration of Tucson's favorite spacecraft entering its "recon" mission, Dillinger Brewing concocted an out-there IPA. Brewed with fitting Galaxy and Comet hops, this IPA is bitter yet smooth. But don't be fooled by first impressions, the Recon has a pleasant aftertaste that puts it above many other IPAs coming out of Tucson.

This Vienna-style Lager manages to delicately balance the malty toastiness of a European brew with the smooth, subtle finish of a light lager. Low on hop flavors, and with a nice amber hue, this BlackRock standby is standard yet special due to its unique flavor that doesn't overpower. 42: The answer to life, the universe and everything; or maybe just a damn fine beer courtesy of BlackRock Brewers.

One of BRB's flagship brews, this West Coast-style IPA is full of grapefruit flavor, which comes from fine hop pairings. It's a subtle combination of flavors perfect for the Pacific sun. Get in close and you might even notice some hints of peach.

Nirvana, in every sense, is a complex beast. So is true with this Belgian Strong Dark from Iron John's, fermented with red grenache grapes and left in a Syrah wine cask. It is indeed sour, but offers a tangy aftertaste almost reminiscent of blueberries. This grape-infused beer, the first in Iron John's "Sour Series," is an excellent experiment and a great brew for fans of sours, or anyone interested in a truly unique beer. Truly one of the standout brews for this Arizona Beer Week.