When Isabel and Erica Franco’s father started making pan de muerto on the anniversary of their four-year-old bakery in 1990, there weren’t many other people in town serving the traditional and ceremonial bread. The large round egg bread is similar in flavor and texture to challah. However, instead of getting braided, each bread round is topped with five (or more) grooved strips of dough with one circular piece joining them in the middle. The grooved strips serve as the finger bones, and the circle piece in the middle, which goes on very last after an egg wash, is the wrist, forming one symbolic skeletal hand when complete.

Once baked to a golden brown, the top of the bread is brushed with an aromatic blend of cinnamon steeped in honey syrup. That brush of cinnamon honey acts as the glue for sesame seeds, anise seeds or, most commonly at La Estrella, streaks of brightly dyed sugar.

Heather Hoch
Calaveras, or sugar skulls, are also part of the All Souls tradition.

Although calaveras, or decorated sugar skulls, are more commonly associated with Día de los Muertos and the All Souls Procession, Erica says this bread has an important place in the holiday.

“The use of color gives life to the dead. The reason it’s brushed with cinnamon is to try to guide the spirit of your loved one to the altar you’ve made,” she says. “Typically, you’d leave a path of marigolds leading to the altar, a chair next to the altar for the spirit to sit, a glass of water and the pan de muerto.”

According to Erica, the altars are typically either three or seven tiers, representing heaven, earth and purgatory or overcoming the seven cardinal sins respectively. The bright colors and beautiful smells of this holiday are meant to attract dead relatives, and, although the idea of the festival itself might seem macabre to some, Erica says it’s actually a joyous celebration.

“People think of it as a morbid thing, but it’s actually the opposite,” she says. “If I give you a calavera, it means I really care for you and I don’t want you dead.”

Isabel agrees, noting where the bread travels next.

“You take the pan de muerto to the cemetery with their favorite foods and drinks and music,” she says, as her sister decorates the bread. “You slice it up and have it for dessert after eating whatever they liked.”

Like many modern holidays, the Franco sisters say the traditions associated with Día de los Muertos and the All Souls Procession are rooted in a combination of ancient Aztec traditions involving leaving food offerings to the gods and also the effect of Catholicism coming to the continent.

“It’s the coming together of Catholic belief with indigenous beliefs,” Isabel says. “When they came together, they adapted and made something of its own.” 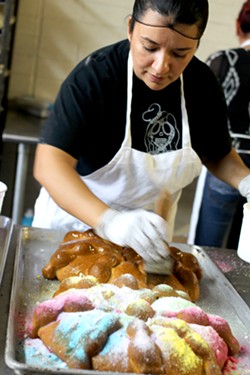 While the sisters have been watching their father bake the bread since they were young, they say La Estrella offering the bread has given busy working families the opportunity to still partake in the tradition.

“It’s traditional to make it in the house, but you don’t see that much anymore,” Isabel says. “It’s important that we keep the tradition going here because so many more women have to work now. It’s like making tortillas—usually those were always made at home, but it’s a lot of work.”

However, she says the excitement that builds when that final “wrist bone” goes on and the subsequent decorating makes all of the work worth it.

“We look forward to this time of the year. We did very few at first but then it grew,” she says.

Now, the sisters estimate that they bake about 600 pan de muetro loaves each season from their family recipe, much of which is sent to college campuses in town for cultural celebrations. The loaves come in four sizes, ranging from $1.50 for a small one-or-two-person loaf up to $16 for the largest size.

“The small ones are good for the procession because you and another person can just rip it up and dig in,” Isabel says.

Since they began baking the bread commercially, they’ve seen it slowly making its way to other bakeries and even supermarkets like Food City and El Super. Kind of like indigenous and Catholic traditions melding to form the basis of the modern celebration of the holiday, the bread’s availability in supermarkets here in Tucson speaks to modern Mexican American tradition. It might not be the same as mom or dad used to make, but the celebration and its foods live on in the scope of a busy, hard-working society. ■ 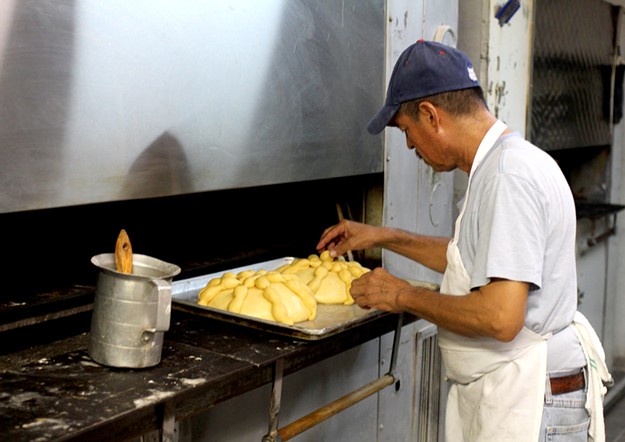 Heather Hoch
Adding a circular piece of dough as the wrist bone is the final touch before the bread goes into the oven.