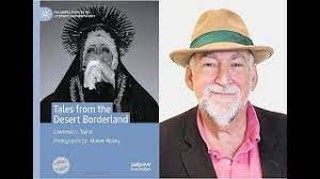 Lawrence J. Taylor had a great launch plan last year for his book Tales from the Desert Borderland.

The novel is set across the desert southwest, from California and Baja California to Arizona and  Sonora, and Taylor had arranged to introduce the book right on the borderline, in the Mexican Consulate in Nogales, Arizona. And he had plenty of readings lined up in Tucson and southern Arizona.

But, he says, “The darkness descended and all was canceled.”

The date was April 2020 and that darkness was COVID-19.  It nearly buried the book.

Taylor did get a little help from his friends. He lives both in Tucson and in Ireland, where he was long a professor of anthropology at Maynooth University near Dublin. Now emeritus at Maynooth, he is affiliated at the UA’s Center of Latin American Study. So the team there, along with the Southwest Center, organized a virtual launch. Book clubs here and there invited him to speak. And this Friday he’ll lead a virtual talk from the UA, explaining how this book of fiction converges with anthropology. las.arizona.edu/events

He’s written five ethnographic books, three about the U.S. Mexico border, including a well-received study of the Tunnel Kids in Nogales. Tales, his sixth book, is his first work of fiction, and, he would say, his first “ethnographic fiction.”

That doesn’t mean Tales is a difficult academic read. Enhanced by photos by Maeve Hickey,  it’s a gripping volume whose linked stories tell the truth about the heartbreaks of the border. The cast of characters wander through desert landscapes and dusty towns: a couple of Border Patrol agents, one hardcore, another not so much; a young undocumented woman barely surviving in Yuma; Canadian snowbirds who take on an unexpected enterprise.

Near Ajo, there is a troubled young Tohono O’odham man and his aunt, a traditional Hia-Ced woman. Closer to Tucson, vigilante rangers scour Cochise County for undocumented prey; an indigenous young mother and her baby try to get to the promised land; and a band of teenagers hang out inside the treacherous tunnels of Nogales.

It’s not hard to see why Taylor calls it an ethnographic novel. In his beautiful writing about the traditional religious walk to Magdalena, just for example, we can see the anthropologist at work as well as the storyteller.

Taylor’s not the only local author whose book was almost smothered by the pandemic.

Rebecca A. Senf, the chief curator at the UA’s Center for Creative Photography, wrote Making a Photographer: The Early Work of Ansel Adams. The book takes a fresh look at Adams, zeroing in on his early years, and it was published by the prestigious Yale University Press, in association with the CCP.

The book came out in February 2020, just a month before Taylor’s, and the CCP went all out to celebrate. Senf put together a companion exhibition, “Ansel Adams: Signature Style,” On Feb. 29, leap year day, her book had a lively launch. The center hosted an Ansel Adams birthday party, complete with cake. Senf gave a talk about her show and the book, and then had a joyful book signing.

Fourteen days after that merry party, the CCP—and art spaces across the nation—shut down to evade the deadly pandemic. Senf arranged zoom talks to help the book along, but various invitations to give book talks were postponed or canceled. Her show lasted just 16 days, and it did not resurface when CCP reopened its doors in August this year.

One good thing in this sorry story is that books last longer than exhibitions. And Senf’s tale is interesting. Adams fans love his dramatic deep-black and white photos of mountains and cliffs “but his photographs did not always look that way,” Senf writes. “Adams’s work of the 1920s and 1930s offers a more intimate, familiar, subtle and human-scaled landscape. Those early prints are warmer and softer, and they emphasize shape and abstract form much more than do those in his mature period.”

Adams himself thought he did his best work from the 1940s and beyond; he changed his style, Senf discovered, after the National Parks Department commissioned him to photograph the parks. It was then he began to switch to “bold contrast, operatic treatment and sense of grandeur,” she writes.

Interestingly, various important photographers and critics prefer early Adams. The late John Szarkowski, a respected—and acerbic—curator at MoMa in New York thought the early works were best. He called the later work “melodramatic and, at its worst, bombastic”—fightin’ words for Adams aficionados

Coincidentally, Dr. Julie Sasse, chief curator at the Tucson Museum of Art, published a rigorously researched art book at the same time Senf brought out her deep-dive Adams tome.  After four years of Sasse’s writing and researching, Southwest Rising: Contemporary Art and the Legacy of Elaine Horwitch was released. The date: Feb. 29, 2020.

Sasse had worked for 14 years with Horwitch, a colorful dealer who was a powerful force in the southwest art world. Operating from 1964 until her death in 1991, she opened multiple galleries and propelled hundreds of artists into successful careers. Sasse’s book details her influence on Southwest Pop, and a companion show she put together for the museum displayed the work of Horwitch artists.

A gala opening at the end of February did double duty: introducing the big exhibition to patrons and providing a book signing. On the bleak day of March 17, when TMA shut down, the glittering evening already seemed like a dream.

But Sasse has had some good luck. TMA opened at the end of July 2020. The Horwitch show was still up on the walls; it ran until Sept. 20. The exhibition has already traveled to the Booth Western Art Museum in Georgia, and this month Sasse is off to the New Mexico Museum of Art in Santa Fe for a slightly different Horwitch show. Sasse will give a talk and do a book signing. And in 2024, Briscoe Western Art Museum in San Antonio will host the Horwich show.

By that time, we can hope, COVID will have been conquered. And good riddance.