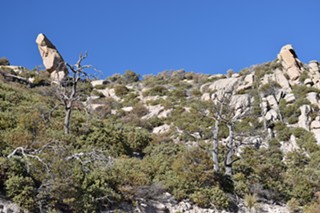 The summer of 2020 was hot, even for Tucson. But even hotter were the flames hungrily advancing through the landscape of the Santa Catalina Mountains overlooking the city. The Bighorn Fire, named for the mountain on which it was ignited by a lightning strike, burned for several weeks. By the time it was fully contained, it had scorched no less than 119,978 acres.

It was not, however, this mountain range's first tango with wildfires—nor will it be the last.

"Just during this 20-year period, there's been a lot of fire activity in the Catalinas," says Professor Donald Falk, who serves as chair of Global Ecology & Management in the University of Arizona's School of Natural Resources and the Environment, with joint appointments in the Laboratory of Tree-Ring Research and the Institute of the Environment.

Fire is inevitable and a long-term fixture of the landscape. The Santa Catalina Mountains typically experience fires every two to 10 years, the majority of which are low-severity surface fires. The Bighorn Fire ended up re-burning some areas that had burned in previous fires.

Michael Stanley is a 40-year resident of Mount Lemmon and the president of the Homeowners' Association chapter. He also works as manager of the Mount Lemmon Water District, staying behind during wildfires to supply water to the firefighters.

"We were definitely on edge and knew that we were in the fire's path even though we thought that it could be controlled down at the bottom area," Stanley said.

In a frightening surprise, the Bighorn Fire ended up also threatening the suburban Catalina Foothills. Residents of the Foothills experienced evacuation orders, as did those of Summerhaven.

Summerhaven, the community on Mount Lemmon's summit, is a place where Tucsonans escape the stifling heat. Tami Arthur, a massage therapist, has owned a house there for six years. Her home is a cozy log cabin that was built with wood reclaimed from a Montana forest fire. Sturdy beams support the roof, and a large window behind her lets in a generous wash of mountain sunlight. Her face is framed by her ponytail, glasses and welcoming smile.

"It's cold up here, but the cold goes away fast. The snow goes away fast because we're still in Arizona!" Arthur says with a laugh. Confidently, she asserts that the snow doesn't bother her.

She is one of a few dozen full-time residents, who had some indication in June of 2020 that something was a bit "off" in their beloved home. Smoke had been detectable for nearly two weeks, and their lives were about to face a brutal interruption by a force of nature all too familiar to the mountain dwellers: a wildfire was approaching—fast.

"They said it was potential to be very, very scary and bad," said Arthur, recalling pre-evacuation communications from firefighters. She had already received some preliminary information about the wildfire, and wasted no time preparing for the imminent evacuation notice. She had already begun packing her things, including photographs and other items of sentimental value.

Although Arthur's home and Summerhaven were both spared, the Bighorn Fire's damage to the surrounding land is still visible. Trees are blackened at the bottom of their trunks, showing where the flames were able to reach. Dry pine needles hang limply from their branches, taking on a sickly orange hue. A few stray, charred stumps litter the forest floor. In spots that were perhaps hit the hardest, it appears that chunks of the forest are simply missing.

"The sad part is, coming up the mountain, you see the burned areas and the trees," Arthur said.

The Bighorn's flames licked at other aspects of the community as well. Residents were temporarily displaced from their homes. Evacuations and other safety restrictions kept visitors from patronizing Summerhaven's small businesses. Arthur recalled being away from her home for over a month while staying with friends, and described the economic impact, stating simply "There was no money flowing for the longest time up here, because of the fire."

But these disruptions wouldn't have the last word. The people of Mount Lemmon wield a fierce devotion to their community that can't be stopped—even by Mother Nature herself. During the Bighorn Fire, they worked together to take care of residents, pets and homes. Arthur described herself and her fellow community members as stubborn people who wouldn't want to live anywhere else, in spite of the perpetual threat of wildfire.

"I love it up here," Arthur said. "I love the people up here. I wouldn't change a thing."

This impressive community spirit, in fact, has largely been credited with saving the structures on top of Mount Lemmon during the Bighorn Fire through educational programming on wildfire safety measures. Thorough preventative measures and community involvement were both key in preventing the Bighorn Fire from destroying any buildings.

Stanley expressed gratitude for the preventative work done by his fellow residents.

"One of the things that's really helped us out as a community is our Firewise program," he said, explaining that the program has helped their community to become more "wildfire resistant."

According to the National Fire Protection Association, the Firewise USA program empowers neighbors to improve their homes' "ignition resistance." In the Mount Lemmon community, this is accomplished through educational programming that encourages residents to clear their houses' perimeters of anything that could serve as wildfire fuel, such as pine needles and dead branches. The program also utilizes Firewise "captains," who are trained to assess neighbors' cabins according to Firewise principles.

Sally Crum serves as Firewise Chairperson for Mount Lemmon. For the past three years, she has taken an active role in educating her neighbors, and certainly has no shortage of stories to tell. Her husband, Lou Crum, is a volunteer firefighter with the Mount Lemmon Fire District. He credits the community's Firewise efforts, led by his wife, with saving its structures from being burned in the Bighorn Fire.

The Mount Lemmon community's Firewise efforts were even recognized publicly by Gov. Doug Ducey and Kerwin Dewberry, the Coronado Forest supervisor. During an official press conference, the two men praised the Firewise work done by community members over several years, saying it helped allow authorities to save the structures.

Sally and Lou Crum, who have both contributed to Mount Lemmon's fire prevention efforts, described the importance of what's known as "defensible space" around cabins. Another important practice is to remove what the locals call "slash," or dry, dead plant matter, such as branches, that gets pruned from around people's houses in order to prevent the fire from reaching them.

For several of Mount Lemmon's residents, the success in saving the community from Bighorn brings to mind another historic fire, the effects of which were far more devastating. In the Aspen Fire of 2003, the town of Summerhaven was almost completely destroyed.

According to Arthur, 95 percent of Summerhaven burned to the ground in the Aspen Fire. Only a small handful of buildings survived, including the log cabin she now owns.

Stanley recalls driving up to see that his house was entirely gone. Sally and Lou remember attending community meetings at Sabino High School to receive updates throughout the course of the Aspen Fire. At one point, the Forest Service couldn't even tell them which cabins had been burned due to the fire's continuing ferocity.

"It was just a long, scary time," Sally recounted.

During the Aspen Fire, the flames ate through so much fuel that they were able to climb to the tops of trees. This phenomenon is known as a "crown fire," when a wildfire burns among the treetops.

"It just looked like a warzone. I mean, there was nothing left. Everything was just burned to the ground," Sally Crum recalled, pausing for a long time.

What the Aspen and Bighorn Fires had in common, however, was that the Mount Lemmon community came together to help one another out during a state of crisis. Neighbors participated in community Zoom calls during the Bighorn Fire. Community members reached out to offer shelter, take care of pets and much more.

Stanley remembers how the generosity of his fellow community members saved his water company after he lost some customers due to the Aspen Fire. Some people whose homes were destroyed in the fire voluntarily continued to pay their water bills as a way to support the company.

"So they were able to literally keep us afloat as a water system," Stanley said.

Firewise efforts have expanded since the Aspen Fire, giving hope for the program's future in light of its contribution to the mitigation of the Bighorn Fire.

Some cabins that had been "fire-wised" ended up surviving the Aspen Fire, which prompted an increase in the program's participation. Program leaders urged residents to create defensible space around their cabins to help mitigate the fires that they learned are inevitable. Sally Crum anticipates even more participation in this year's program.

Another significant development has been a shift in the overall philosophy of fire ecology.

"For a hundred years, their firefighting was all suppression," said Lou Crum, explaining that views are now evolving to involve more prevention.

Prevention entails fuel reduction so that future, inevitable fires won't be as massive. This effect can be accomplished by allowing fires to burn at a manageable level, rather than stopping them entirely. Falk, with the University of Arizona, describes fire suppression as a dilemma, explaining that biomass accumulates every year a fire doesn't occur. It is necessary to suppress some fires that might risk human safety or cause ecological damage.

"But if that's our only strategy, which it was for many decades," Falk says, "it paints us into the corner we're in now."

Efforts are now more focused on working with fire in a healthy way to prevent catastrophic damage, rather than suppressing fire altogether. But this is only the beginning. The challenge now is to ramp up these preventative measures while we still have time. Because the Bighorn Fire reduced the forest's fuel load, a buffer of time was created, which will allow for some land management work to get done. But this buffer won't last forever.

"We need the funding and the personnel and the planning to get to work on creating healthier forests," said Sally Crum, stressing that the urgency of the situation is constrained by the often slower speed of government operations.

Sally Crum works with grants and with government entities to help propel this objective. Both Sally and Lou Crum emphasized that funding is an essential part of the equation. They hope to obtain the resources needed, but are concerned about the bureaucratic obstacles that stand in the way.

As a resident and business owner, Arthur's biggest concern about fire ecology's future is the carelessness of many visitors, especially with regards to cigarette butts and campfires. She expressed her wish that visitors would be more courteous to Mount Lemmon residents with their actions.

"You know, outside Summerhaven on the trails, it's everybody's. It belongs to all of us," she said. "But we're all responsible for keeping it safe."

Although fire has caused both heartache and destruction in the Mount Lemmon community, it has also been an opportunity to learn.

"And again, the Aspen Fire was catastrophic, but it's kinda like history," Stanley said. "You can't change it, I mean you just have to learn to live within those bounds and be able to make it better each time that something catastrophic happens."