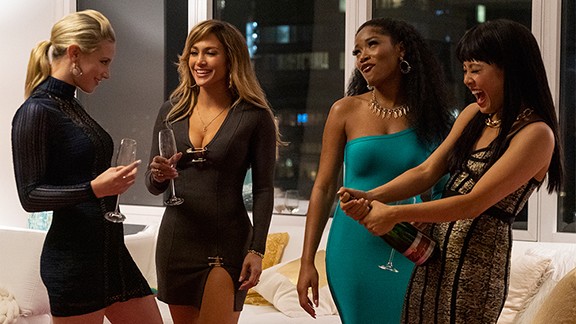 STX Films
Hustlers delivers in all the right places, if it weren’t actually a movie.
Hustlers, starring Jennifer Lopez as a stripper who goes smooth criminal during the Great Recession, is getting some great reviews. I'm going against the grain on this one, for I find it derivative, boring and hampered by a shallow script.

So, why? Why has the film been receiving Scorsese comparisons (Hey, it has tracking shots!) and high scores on the Rotten Tomatometer?

I'm thinking it's because of the powers of Jennifer Lopez's multi-million-dollar ass.

No question, as talented an actress as Lopez has been in the past (Selena, Out of Sight, shit, I liked her in Maid in Manhattan) her physical calling card has always been her ever-present, much-ballyhooed ass. Her ass beckons to you like an evil genie. Her ass has its own economy and solar system. In fact, as Jennifer Lopez did a pole dance in this film (for the obligatory "This is how you pole dance!" scene), I could swear I saw a little astronaut just off to the left of her ass performing a spacewalk.

This is a movie in which, without question, Lopez bares and displays her crazily potent ass. She's held it back at the movies, until now, and it is the most dominant persona in this cinematic experience. So, I'm thinking that this has caused some sort of distraction—disruption if you will—in the movie critic ecosystem. People are so hypnotized by her ass that they are failing to recognize the movie kind of blows.

Based on a true story that appeared in a New York Magazine article, Hustlers focusses on Destiny (Constance Wu), a newbie stripper trying to find her way in the big city. It appears she's on her way to being stuck in the minor leagues of lap dancing, until Ramona (Lopez) takes the stage and shows her how to take control of her situation through determination, calculation and, yes, most importantly, showcasing your cosmically empowered ass.

Because most of their big tickets come from Wall Street, troubled times strike when the recession takes hold. That's when the strippers, a team consisting of Destiny, Ramona, and some other girl who always vomits when things get tense, go rogue. They go fishing for suckers that they can drug while they max out their credit cards.

This is where the film teases at becoming something interesting but the crimes these girls commit don't really make for an interesting movie. They drug a couple of high rollers (one of them played by Frank Whaley), they max out a few cards, and that's it. I was waiting for them to kill somebody or pull off a major diamond heist. Anything to justify this movie beyond the gratuitous exhibition of Jennifer Lopez's pulsating, seems-to-have-a-life-of-its-own, gigantic ass.

Wu is good here, and Lopez has the makings of an interesting character. None of the characters really talk all that much, and just when things seem like they will get interesting, it goes flat. It's also worth mentioning that when this movie goes flat, Lopez's ass goes into hiding, like a fat bear with a bellyful of honey hibernating for the winter.

As stripper movies go, this is not the worst one. Hell, it might even be the best one. Surely, it's better than Showgirls, which featured Elizabeth Berkeley's evil, strange ass at its core (I still have nightmares where it is trying to kill me). Striptease with Demi Moore is a non-starter, for her ass, although enviable, didn't possess any powers—evil or good—that I could detect. As movie asses go, it was standard issue.

This movie shouldn't be called Hustlers. It should be called Hey Look, It's Jennifer Lopez's Omnipotent Ass Up On Screen! Give Us Your Money! There's another great Jennifer Lopez movie to be had, but Hustlers isn't it. It will forever be known as the film where Jennifer Lopez said "Ah, screw it!" and finally unleashed her greatest physical asset upon the world of film. For some, that will probably be enough.