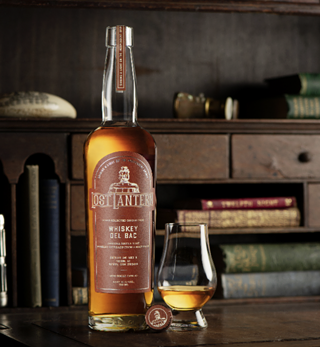 Staying true to the 200-year-old Scottish bottling tradition, Lost Lantern searches the country for  one-of-a-kind regional whiskeys to bottle and distribute through certain retailers and their online shop, LostLanternWhiskey.com.

Co-founders Nora Ganley-Roper and whiskey journalist Adam Polonski said they added the Old Pueblo whiskey distiller due to their unique process of using mesquite smoke in production of their spirits.

“When I worked for Whiskey Advocate, I got to know Whiskey Del Bac through covering a lot of American whiskeys that were starting to rise up. I thought this [Whiskey Del Bac] was one of the most interesting whiskeys I’ve encountered because it was doing something totally new,” Polonski said. “Whereas a lot of craft distilleries were doing things like making bourbon in places bourbon has never been made, they [Whiskey Del Bac] were making whiskey with smokey mesquite, which has never been done anywhere.”

Polonski said he and Ganley-Roper visit every facility they work with to get a “sense of place” and a better understanding of the distillers’ dedication to their craft. While in Tucson, the duo tasted more than 15 different whiskeys, aged in small 15 gallon casks, before choosing the top three to be added to their five-bottle spring line up (New York Distilling Company and Balcones Distilling from Waco, Texas are also featured in this seasonal offering).

“This is a unique opportunity to present a comparison of the casks coming out of Whiskey Del Bac,” Ganley-Roper said. “We think you can learn a lot about a distillery by trying several single barrels side-by-side.”

When Lost Lantern chooses a whiskey to bottle, the spirit is transferred from the barrel it was aged in to a stainless steel cask so the whiskey will not continue to mature.

What Lost Lantern customers get is the exact whiskey varieties Polonski and Ganley-Roper tasted when they visited the distillery in 2019. Each of the three offerings is limited to 66 bottles of very rare whiskey that can’t be reproduced due to the reactions that take place inside the wooden cask while maturing.

“We knew we wanted to choose a few selections from Whiskey Del Bac because their cask format is smaller in size and we wanted to make sure there would be enough bottles to go around with the cask,” Ganley-Roper said. “We realized we had a pretty cool opportunity with selecting three different casks, in that we could specifically speak to the different aspects of Whiskey Del Bac.”

Each of the three single whiskey casks from the distiller was made with 100% malted barley, with 60% of the barley smoked with mesquite wood, and they have different flavor characteristics.

Ganley-Roper said they view Single Cask #7 as an entry for Bourbon and rye drinkers to enjoy what Whiskey Del Bac produces.

“It has more of those oak tones, caramel and spice that Bourbon and rye drinkers find in the whiskeys they love,” Ganley-Roper said. “It’s super fun to taste these next to each other, but it also allows people who like different styles of single malt to find something that speaks to them within the Whiskey Del Bac portfolio.”

For more information or to purchase a bottle (or all five of this season’s offerings), check out lostlanternwhiskey.com.