Bordering on Brutality: The Death and Life of Aida Hernandez 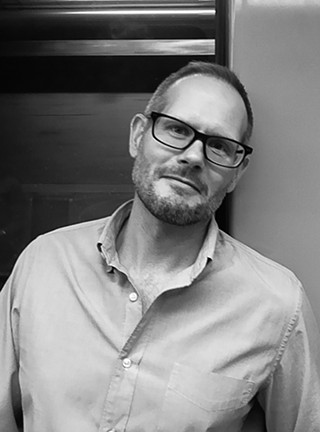 Courtesy
Author Aaron Bobrow-Strain: “Aida has to fight for her life, literally, many times in the book, but the larger journey of the book—the suspense and uncertainty at the heart of the story—is about risking everything to see if she can get from that place of social death to a place where she isn't just surviving, she is thriving—truly alive."

Aaron Bobrow-Strain's new book about the border, The Death and Life of Aida Hernandez, combines the life story of a young undocumented woman, told in extraordinary detail, with a history of the U.S. border enforcement regime. For 25 years, he writes, the migrants have been subject to America's "bi-partisan obsession with ever crueler and more costly 'deterrence' at the border."

Aida (a pseudonym) was born in 1987 in Agua Prieta and brought to Douglas in 1995 as an 8-year-old. With a novelist's skill—and with Aida's collaboration—Bobrow-Strain begins the tale with her idyllic playground escapades as a small child and ends it when she's a woman of 30. In the years in between, he shows how she suffered mightily not only from domestic violence at home, but from the increasing brutality of America's immigration laws.

The cruelties she faced, in detention, in deportation, in separation from her son, remind us that horrific as President Trump's innovations are—from last year's kids in cages to this year's proposal to charge fees to desperate asylum seekers—presidents from Clinton to Bush to Obama are also complicit in the hardening of the border. As Bobrow points out, it was Clinton who approved "prevention through deterrence," a scheme that forced impoverished migrants into the most dangerous reaches of the desert and ultimately has caused the deaths of many thousands. More than 3,000 border crossers have perished right here in Arizona.

Bobrow-Stains, a professor of politics at Whitman College and an immigration rights activist, first connected with the border when he worked for BorderLinks in Douglas in the 1990s. His book benefits from his first-hand experiences in la frontera as well as his scholarly research into the history of Douglas and immigration law. And his compassion. Booklist called him an "immersion journalist of conscience." Author Hector Tobar praised it as ground-breaking: "Here, at long last, is a nonfiction account of our country's immigration drama written with the intelligence, passion and sweep of a great novel. There are echoes of Victor Hugo and Emile Zola in The Death and Life of Aida Hernandez."

Below is a Q&A with the author, who will present his book in Tucson at Antigone Books on Sept. 20. The excerpt recounts a fateful day in Douglas when Aida is 20 years old, the mother of a U.S. citizen—and a target of the Border Patrol.

How did you find the woman you call Aida Hernandez?

Rosie Mendoza, a powerhouse social worker who advocates for victims of domestic and sexual violence on the border, connected us and encouraged Aida to tell her story. I hadn't planned at all on writing a book about one person, but I knew almost immediately after Aida and I first spoke that she had a powerful message for everyone who looks at the border and immigration from a relatively privileged position. Her story left me shaking when we first met in 2014. It was filled with such intense pain and suffering, but the thing that really left me in tears was the fierce pride and sense of dignity she conveyed as she told it. She had a kind of brio and humor and pride from having fought against enormous odds for a place for herself and her son in the United States, and from having survived a world made almost unlivable by our border and immigration policies. I think that this spirit often gets left out of reporting on that portrays immigrants as passive victims in "tragic immigrant tales."

Of course, the idea of having someone write a book about you wouldn't click with a lot of people, but it did for Aida. She said that telling her story could be a part of her healing and a way to turn her suffering into something that could reach people and make a difference. From there, the hard work of research began. Getting the story right meant doing many hours of interviews with Aida, her family, friends, and other people whose lives intersected with hers; cross-checking those accounts with school, court, immigration, and other records; talking with experts to verify the plausibility of her stories; and reading drafts with Aida and other people who appear in the book.

The book begins with Aida's mother fleeing a violent relationship with her young children in tow, upending their lives and having to start over in a new town. It's the kind of moment that's part of so many people's life journeys. But, in this case, the flight takes Aida and her family across the U.S.-Mexico border. And it happens in 1996, just as the United States' new, increasingly militarized and unforgiving approach to border enforcement slams into southeastern Arizona. Within a few years, the funnel effect of Border Patrol's "prevention through deterrence" strategy has pushed a continent's worth of migration into Aida's new hometown, and upended life in the place where she is trying to learn English, make new friends, do well in school, and stay out of sight. Aida grows up undocumented in Douglas, just as Border Patrol strategy thrusts the town into the center of national immigration debates. By the time the book ends, Aida is 30 and still grappling with the traumatic legacy of those policies.

So, in a way, the book is a coming-of-age story, filled with all the triumphs and tears, joys and mistakes you'd expect—but one that's deeply marked by our country's 25-year bi-partisan obsession with ever crueler and more costly "deterrence" at the border. And in that context, even the smallest misstep—the normal kind of mistakes that animate all coming-of-age stories—carries severe and disproportionate consequences for Aida.

Your book is also a loving portrait of the twin border towns of Douglas and Agua Prieta. Why did you focus on them?

I'd had experience in both towns when I worked for BorderLinks in the 1990s. Once I became a professor at Whitman College, I had returned to them as often as I could with students. I lived far away in Washington State, but the towns' welcoming people, spectacular setting, rich history and place at the center of immigration debates kept calling out to me. There were also so many inspiring people in Douglas and Agua Prieta trying to heal the traumas and divides being created by border policies. Once I got to know the area better, I got more and more fascinated by Douglas' history of labor organizing and the rise and fall of its vibrant Mexican American working class, which had been anchored by union jobs in the copper industry. I think that the blows Douglas experienced as a result of Reagan-era restructuring and deindustrialization explain a lot about the way the town experienced the coming of hyper-militarized border enforcement in the 1990s and 2000s.

You began your research in 2014, the year that so many Central American women and children arrived at the border. Did this humanitarian crisis have any role in your decision to write about immigration and the border?

I see the current crisis as the latest manifestation of a much longer process. Over 25 years, increasingly harsher and more expensive strategies haven't actually deterred migrants (as we see again today), but they have paid huge political and economic dividends for a lot of folks. The list of those who benefit is long: polarizing politicians, white supremacist groups, private contractors profiting from detention, a high school graduate in Douglas who might see Border Patrol as the only good job available to her, companies and consumers that benefit from cruel policies that make immigrant workers more vulnerable and exploitable. All those actors have a stake in maintaining perpetual border crisis. This was true in the 2000s, and true today. By placing the current moment in a larger perspective, Aida's story reminds us that just getting rid of Trump, or applying some "smart security" fix, isn't going to resolve the problem.

Can you explain the book's title without giving too much away?

There is a literal meaning that's hard to explain without giving too much away. On a metaphorical level, though, it's about the fact that Aida grows up fully a part of Douglas, but also excluded and cut off from the life of her community because of her immigration status and the way the United States approaches border security. She's denied basic rights and chances that any human should get. It's a kind of social death. Aida has to fight for her life, literally, many times in the book, but the larger journey of the book—the suspense and uncertainty at the heart of the story—is about risking everything to see if she can get from that place of social death to a place where she isn't just surviving, she is thriving—truly alive.