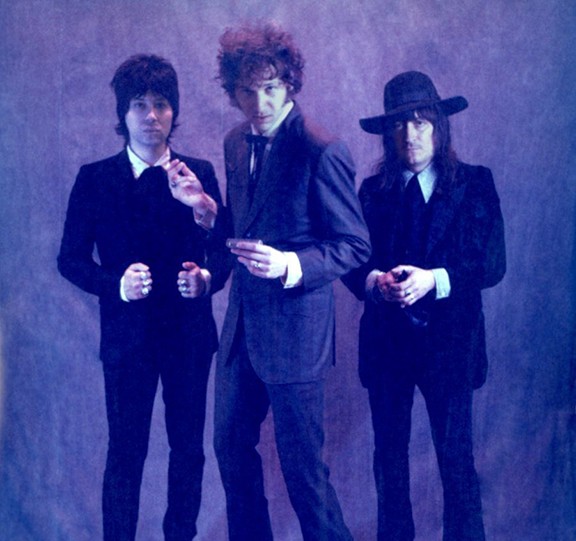 When it comes to music genres, few hold as much history or influence as blues. So when a band improves on a more than century-old style, music fans best pay attention. Enter: Daddy Long Legs on a dusty, westbound train. Birthed from St. Louis, New York and a pile of classic vinyls, this trio have been "huffing and puffing and blowing houses down on a nightly basis" since 2010.

Daddy Long Legs is made up of lead vocalist and guitarist Brian Hurd; acoustic, electric and baritone guitarist Murat Aktürk; and drummer Josh Styles. The trio fuses blues and punk in an energetic fashion, while still maintaining the groundwork traditional blues is known for. And the guys have done their research, listing their influences from as far back as the 1930s with Leadbelly and Howlin' Wolf, into the '50s with Screamin' Jay Hawkins, and even listing those who've warped the blues formula themselves like Captain Beefheart.

"We come at it from a very different angle—we didn't go to music school," says Hurd, who also goes by the stage name Daddy Long Legs. "We're more of an emotional band than a technical band. And I think that's where a lot of modern blues goes wrong. You've got a lot of proficient players out there, but they can miss the heart and soul of blues."

Daddy Long Legs came onto the larger blues scene in 2013, releasing their debut album Evil Eye On You. But even before this release, the group got plenty of crowds stomping due to their propensity for touring. Their so-called "Infinite World Tour" is as much a part of the band as their formal album releases. The band describes their live shows as equal parts roots rock, blues and guttural soul—stripping down old standards and making them shiny and new again.

"You've gotta see us onstage," Hurd says. "That's where we do our best work."

Watching their live shows proves that the members of Daddy Long Legs treat their music as a performance, not just a recital. Hurd is a commanding frontman, stomping around while contorting his body into his harmonica and belting out raw vocal melodies. Styles, who switches between sticks and maracas to play the drums, isn't afraid to stand up to really bust out some rhythms. And Aktürk ties the scene together with rhythm guitar and backup vocals.

But on their albums, Daddy Long Legs can range from a rougher to a smoother sound, depending on which record you listen to. Their debut employs a purposefully rough and raw sound. A listen to the track "Death Train Blues"—with its busy drums, wild harmonica and vocals distorted nearly beyond recognition—is a good example of this early period.

The band's consistent touring led to a more practiced, eclectic and unique sound. Their newest album, Lowdown Ways, released May 10, and features 12 original compositions. But this isn't the only proof they're exploring beyond blues standards. Tracks like "Pink Lemonade" move to a groovier, clean sound, while songs like "Back Door Fool" are emotional ballads.

"We're constantly evolving our sound over time," Hurd says. "When we first started, we wanted to capture the energy of our lives sets, but that's a really hard way to do it. Our first album was very barebones, so now we've pushed the sonic horizon."

Much like their delta-soaked influences, these beloved blues bashers keep a sense of personal woe in their music. But even when some of the lyrics depict strife and loss, the instrumentals are energetic and engaging, and often break into hypnotic, pulse-pounding jams.

"When we first started, we just wanted to be high-energy and wild, but now we're a bit more progressive and breaking things up," Hurd says. "There's definitely elements we retain. We always want to have somewhat of that traditional blues element, but we want to break boundaries as well."

As they are men of tradition, the touring continues for Daddy Long Legs. They will soon crack 100 concert dates for this current tour, and have plenty more ahead of them before settling down to record more music in the studio. It's tiring, but they wouldn't have it any other way.

"We're always growing," Hurd says. "The road's been good to us."