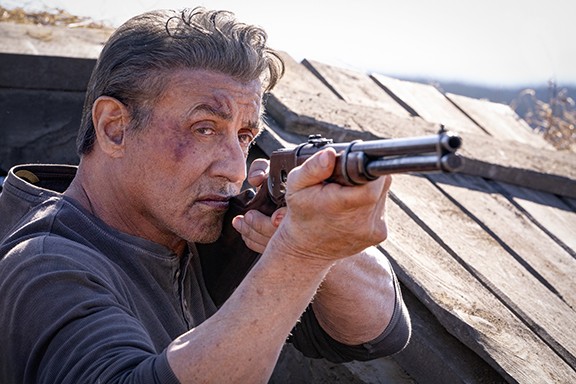 Courtesy photo
Sylvester Stallone takes his iconic John Rambo character and places him in what amounts to little more than an ultraviolent MAGA wankathon in Rambo: Last Blood, easily the worst film in the franchise and one of the worst in Stallone's career.

The Rambo movies have been on a slow downhill slide from the beginning, but have always been watchable and worthy of my fandom. First Blood was awesome, Rambo: First Blood Part II was fun and silly, Rambo III was passable action fare but a little tired and Rambo (2008) was bit of a drag, albeit with some decent action scenes and carnage.

Rambo: Last Blood is an abomination in the way all the Charles Bronson Death Wish sequels were terrible. This film does absolutely nothing to merit its existence. As a Rambo/Stallone fan, I wish I could pretend it didn't happen, but it has, and its pure dreck. Stallone has said he will continue to play this character if the film is a success. I almost want this piece of crap to be a success so we can get a better swan song for Rambo. It would be a shame for the saga to end this way.

The film picks up eleven years after the last chapter, with Rambo sporting a clean haircut, a cowboy hat, and a peaceful existence on his late father's farm in Arizona. He rides horses and hangs out with the housekeeper (Adriana Barraza) and her niece, Gabrielle (Yvette Montreal), who has taken to calling Rambo uncle John. Rambo finally has a "normal" existence.

Gabrielle starts talking about going to Mexico to visit her long disappeared father, and it becomes apparent where things are going. No, she doesn't have a nice reunion down there, and she winds up a sex slave addicted to drugs in one weekend. Rambo to the rescue.

It all builds up to a final half hour where Rambo finally goes into Rambo mode, fighting a Mexican drug cartel on American soil in the tunnels he conveniently built under his daddy's farm. He manages to booby trap the place in the few hours it takes for the cartel to reach him from Mexico. (The Mexicans are fully armed and ready to kill, mind you. Damn that incomplete border wall!)

Did this have any chance at being good? I don't think so. At this point in the Rambo lore, you could go two routes. One route, an examination of Rambo's incurable PTSD, and maybe he goes crazy and becomes a vigilante hunting American, homegrown terrorists and the KKK. You could've also taken a plot like that, and gone the pure camp route, giving us a wall-to-wall experience of Rambo blowing shit up and taking out bad guys for an entire film, but no attempt at serious exposition.

This one starts with the whole angle that Mexico is bad, a total Trump platform that gets things off on a very biased, one dimensional note. It tries to be serious about Rambo's condition, but not really (We see him popping a lot of prescription pills, but no explanation of what they are or what they do).

David Morrell, author of the original First Blood novel and creator of the John Rambo character, has disavowed this film, calling it "a mess" and "a clumsy exploitation film." Here, here, Mr. Morrell. At just under 90 minutes, and rumored to have had a lot of reshoots and rewrites, it's pretty clear that Stallone and company really didn't know what to do with this movie. The preview trailers are full of scenes not in the film. Maybe this one got massacred by preview screening exit polls and meddling studio dummies? Whatever happened, there's a persistent, resultant stank coming off this chapter.

At the end of this Trump propaganda reel—er, I mean, movie, the sad, familiar Rambo theme starts to play, and they show us a montage of the past movies behind the credits. (Just like Twilight!) I was thinking that this movie didn't earn the right to associate itself with those past efforts and play that Rambo theme, even with Stallone's participation. It's a cinematic disgrace.