Blood in the Snow

This Swedish vampire movie has a slow pace, but it amply rewards patient viewers

Opens Friday, Dec. 5, at the Loft Cinema (795-7777).
Let the Right One In
Tomas Alfredson
Kåre Hedebrant
Lina Leandersson
Per Ragnar
It makes sense for Swedes to make a vampire movie, because Swedes are a lot like vampires: They're pale, withdrawn, solitary people who choose to live in a place where night lasts for three months.

The only vampire traits they lack are the ability to turn into bats, and a boastful sense of superiority. While Americans feel free to proclaim the United States the greatest country in the world without actually checking out any other countries, Swedes--who have free health care, free education, a much lower infant-mortality rate and are generally taller than Americans--don't go around telling everyone how great they are.

Instead, they make moody, depressing films that are unlike American weepies in that they are not aimed at emotional catharsis. At the end of a good Swedish film, you leave feeling bad about everyone and everything you know. While the form was perfected by Ingmar Bergman in the 1960s and '70s, the mantle has now passed to a new generation of filmmakers like Tomas Alfredson, whose Let the Right One In is, as of this writing, rated No. 194 in the Internet Movie Database's list of the 250 best films. That means that if you were to see an infinite number of films in your lifetime, only 193 of those films would be better than Let the Right One In.

Set in the late 1970s or early '80s (as evinced by the multicolored snow jackets and references to Brezhnev), Let the Right One In occurs in a perpetual Swedish winter. Twelve-year-old Oskar (Kåre Hedebrant), who is ghostly pale even by Swedish standards, is, inexplicably, finding it hard to enjoy the traditional schoolyard game of "beat-up 12-year-old Oskar." Instead, he dreams of revenge and spends his evenings sticking his pocket knife into imaginary enemies and making empty threats to the vacant playground outside of his depressingly industrial apartment complex.

One day, while playing with his Rubik's Cube, he sees a dark-haired little girl standing in thin clothing atop the snow-covered jungle gym. It's Eli (Lina Leandersson), who's just moved in next door. She and Oskar become friends, and he gets his first taste of acceptance. Of course, as so often happens with young love, one day, Oskar cuts his hand in Eli's presence, and she leaps to the floor to lick up the blood. This causes some tension in their relationship, as Oskar is torn between his love for Eli and his distaste for her hobby of ingesting the vital fluids of the innocent and leaving their lifeless corpses in the freshly fallen snow.

In the scenes where Swedes are drained of their hardy Nordic blood, director Alfredson and his cinematographer, Hoyte Van Hoytema, are inordinately fond of perfectly balanced wide shots. Frequently, an archway or tunnel will be centered in the frame, and the action will slowly unfold, ruining the symmetry and creating a distant, cold and eye-catching view of murderous horror. While this is pretty, there's nothing revolutionary about the visual style; it's more of a technical exercise--a well-executed one, but it would have been more interesting if it had been a bit more daring.

The acting, on the other hand, is disturbingly original. As Oskar, Hedebrant captures something rarely seen in portrayals of 12-year-olds: He can be unselfconsciously kidlike. One moment, he's smiling inappropriately, kicking his feet about like a young child, and then moments later, he'll present a paralyzed look of realization, as though he's suddenly become aware of how embarrassing his entire existence is.

This is strikingly effective when Oskar is attacked by the evil schoolyard bully, Conny (Patrik Rydmark). Rydmark's acting is more like that of American child actors: He seems self-confident and schooled in the way of cool. His contrast with Oskar's tremblingly obvious lack of experience makes their encounters particularly unpleasant, as though we were watching Colin Farrell sexually humiliate a teddy bear.

This is all part of Alfredson's intended mood. While Let the Right One In has a few jump-out-of-your-seat moments, its horror is more in the realm of the slow creep and a consistent sense of discomfort. Neatly, the uneasiness produced by the constant threat of violence is more than matched by the disturbing presentation of the daily degradations of being a 12-year-old outcast. This, largely, is a product of Hedebrant 's unsettling performance and Alfredson's slow pacing.

That slow pace may be off-putting to American audiences. If so, I'm sure they'll find it rectified in 2010, when the American adaptation (by Cloverfield director Matt Reeves) is released. But sometimes in cinema--as in that other, more intimate art form that Swedes are known for--things work best when you don't rush them.

Let the Right One In is not showing in any theaters in the area. 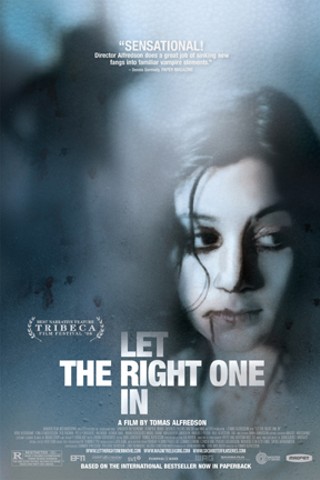